A month-and-a-half ago, I explained why computer maker HP's (NYSE:HPQ) supply chain woes were more serious than those of its peers. The brand was the only major name to deliver fewer PCs in the third quarter of this year than it did during the third quarter of 2020, according to data from technology market research outfit IDC. The dip can ultimately be chalked up to overly complex design and sales processes. While the company is addressing these matters, it's a fix that could take several quarters to complete.

As is so often the case, though, there's a company doing right what HP is doing wrong. Dell Technologies (NYSE:DELL) is that counter-company. IDC's numbers indicate Dell's personal computer sales improved year over year by a market-leading 26.6% last quarter, and after last week's quarterly earnings conference call, it's pretty clear why. 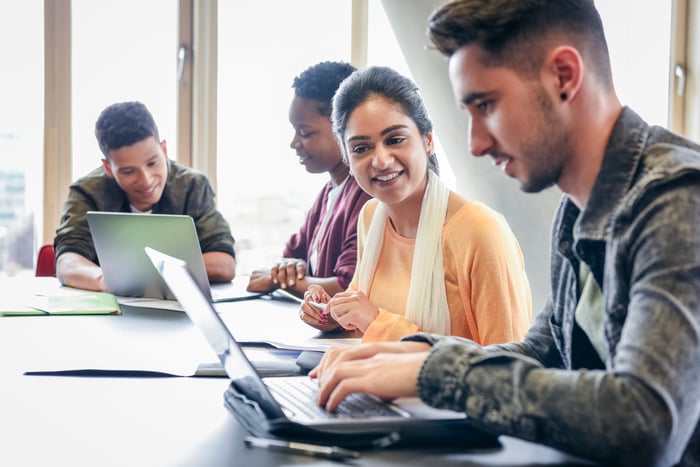 As a refresher, HP CEO Enrique Lores conceded during the company's second-quarter conference call held in August that the majority of its production is managed by ODM [original design manufacturers] who are responsible for every facet of that production, including the procurement of components. That's fine as long as there's no supply chain crisis. In the current environment, though, HP's direct clout is required to get things done. The company also admitted it was designing computers with too many different components when the same part could be utilized in multiple models. This simplification would not only make ODM's output faster, but also cheaper and (in the current environment) more likely.

Yet another vulnerability was and still is HP's lack of supply chain digitalization. That's being addressed, too; Lores pointed to an updated resource planning platform during the Q2 call and reiterated its implementation during last month's Q3 earnings call.

These improvements are now materializing. Such improvements, however, can be time-consuming and tricky to put in place when the effort begins in the middle of the supply chain crunch that made the need for them so clear.

Dell entered the same storm on a completely different footing. That is to say, it was far better equipped for what was to come when the global technology supply chains broke in early 2021.

It's not easy to identify these differences. The subtle clues are there, however, if you know what to look for. Take a comment made by Dell COO Jeffrey Clarke during last month's fiscal 2022 third-quarter conference call as an example. He said, "We have fewer SKUs, less complexity," and goes on to point out, "We have a design methodology that has interchangeability and leverage and reuse." It's almost a diametrical opposite of HP's approach.

There's something else Clarke noted during the Q3 call that speaks directly to Dell's surprising strength in a tough environment:

[W]hat I like about our supply chain is we've digitized it over the years. We're now able to do scenario planning and simulations. That simulation allows us to make quicker decisions.

Clarke didn't name names, but his comments are at least a partial nod to a company called Palisade.

It's only one example of Dell's careful management of its operation. But, that's the point -- it's only one example of many. Last quarter's market-leading year-over-year PC sales growth of 26% suggests many more similar solutions were already in place once the semiconductor shortage took shape, as that growth only extends an impressive trend. 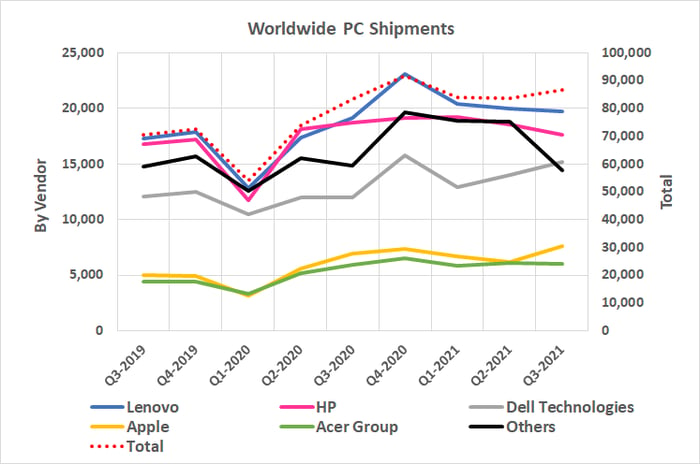 None of this is to suggest the HP can't be fixed, nor to imply that Dell is simply sailing through the chip supply shortfall as if it's not happening. HP is well aware of its vulnerabilities and is addressing them. Dell is also still dealing with supply headaches. More than that, Dell faces sheer logistics hurdles that aren't typically considered by most enterprise resource planning tools.

It's clear just from the two companies' recent conference call rhetoric, however, that Dell Technologies is in a much better position to handle the looming surge in PC demand linked to the likely worldwide return of workers en masse to their offices. The computers they were using have aged nearly two years since the last time they were used, and are due for an upgrade.