With earnings season heading out of sight, all eyes are moving to the holiday season and the new year. Unfortunately, 2022 doesn't necessarily bring bullish market prospects with it, and investors are still uncertain about many high-quality stocks that have fallen from their recent peak. Among those companies, there is one in particular that sits at the top of my Christmas list.

Shares of Roku (NASDAQ:ROKU) are down 57% from their all-time high, yet the business is executing on all fronts. The market doesn't always give out gifts like this, which is why I want to pick up more shares of Roku by the end of the year. 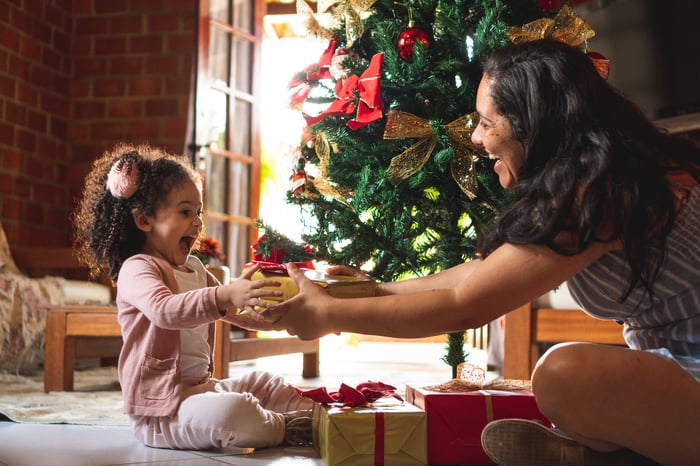 What originally looked like a low-margin hardware provider on the surface has emerged as smart-TV software and advertising platform. Roku sells hardware -- its video players -- at break-even prices (or even at a loss), but where it really shines is the advertising business. The company's centralized streaming platform allows users to go to one place for all of their services, and the simplicity and ease of use of this platform have attracted over 56 million active accounts, an incredibly valuable audience to marketers.

The streaming industry is large, but Roku leads its platform niche. The company has grown its active user base at a healthy double-digit pace quarter after quarter. Roku now holds over 30% market share, nearly double that of the second-place competitor, Amazon TV.

The company is also expanding its offerings with Roku TV and the Roku Channel. Leveraging data from millions of accounts, it can use the Roku Channel to drive engagement, making this a valuable avenue for advertisers. This virtuous cycle has begun playing out with streaming hours on the Roku Channel more than doubling in the third quarter as it becomes a top-five streaming channel for the platform.

With multiple avenues for advertising, millions of engaged accounts, and a dominant position in its niche, Roku saw its average revenue per user increase nearly 50% year over year in the third quarter, surpassing $40.

Roku's eyes are also set on new markets. Last quarter, it announced the expansion of its platform in Germany, where it hopes to reach the same level of dominance as it has in Canada and the U.S. Roku isn't done expanding in North America, but it also announced plans to expand its offerings in Peru, Chile, and other Latin American countries. Roku hopes these Latin American markets will follow in the footsteps of Mexico, where Roku recently became the largest streaming platform by hours streamed, according to the Hypothesis Group.

Roku is already seeing international revenue growth outpace that of its home market, and the efforts in Latin America put the company in a prime position to sustain this momentum. It has an enticing cycle of network effects where more accounts on the platform lead to companies willing to pay more to advertise there. Seeing this strong success internationally unlocks a vast opportunity for account expansion, and the platform's value to advertisers is likely to explode if Roku can lock down another massive audience in that part of the world.

Typically when a stock has been performing as well as Roku has, its valuation rises, but that's not the case here. Roku's valuation has actually fallen dramatically in 2021 from over 30 times sales earlier this year to less than 12 as of this writing. Roku has suffered the same fate as many other "pandemic stocks," but with such strong prospects, the recent declines leave investors with a great buying opportunity.

Roku is holding all of the keys to continued success, and it's using them to open doors for its future. The market is giving long-term investors a golden opportunity at current levels, which is why Roku is one of the largest positions in my portfolio. If the stock remains pressured, I'll likely be buying more of this stock as a Christmas present and make it my largest holding.