Many growth stocks have come under pressure lately, but few as much as Upstart Holdings (NASDAQ:UPST). The company, which provides an artificial intelligence (AI) system to loan providers that can be used instead of the traditional FICO score in lending decision-making, has seen its stock price decline by nearly 50% in just a month.

In the current market environment, heavy selling has impacted stocks with strong and weak fundamentals alike, so for investors seeking to take advantage, it's essential to identify which are the winners with stocks temporarily on sale and which are losers that investors should avoid.

Here are three reasons to believe that Upstart will be a long-term winner worth buying on the dip. 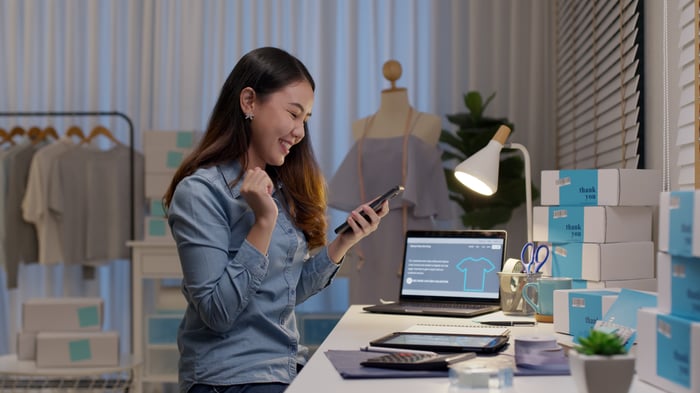 For decades, banks have used some version of the traditional credit score to make lending decisions. This fairly simple metric invented by Fair Isaac grades would-be borrowers based on their financial track records, weighing such factors as their history of timely debt repayments, and how much they owe relative to their total ability to borrow.

However, while both the original FICO score and the variations on it created by other rating agencies are effective gauges of lending risk for some people, their simplicity can cause them to miss the boat on others. Many individuals are better credit risks than their credit scores would indicate, but wind up having to pay higher interest rates on their loans or find themselves unable to obtain loans altogether.

Upstart uses proprietary AI algorithms that examine a wide scope of data about each applicant to make a lending decision. It claims that lenders using its technology experience 75% fewer defaults on loans, and that its AI approves borrowers at the same rate as methods based on FICO scores. In other words, it better identifies which borrowers are most likely to repay their loans, even among those who may have lower traditional credit scores.

Lenders nearly universally rely on credit scores, so the potential ramifications of a tool that does the job better are enormous. That's why Upstart must continue to show that its technology works. When the company went public last December, just 10 banks had partnered with it. As of its 2021 Q3 earnings call in early November, the company had 31 lending partners. Four of these partners have entirely moved away from using the FICO score, demonstrating their confidence in Upstart's technology.

When Upstart came public, it was primarily using its technology to help originate personal loans, a market that management estimates to be worth $81 billion. Shortly afterward, the company acquired Prodigy, an automotive retail software company. This deal helped Upstart enter the auto loan market.

The Upstart Auto Retail business unit is just getting off the ground; it originated its first auto loan through the platform a week before the company delivered its Q3 report. CEO Dave Girouard noted on the earnings call that the company is adding roughly one new dealership location to the platform every day, and seven banking partners have already signed up to participate in automotive lending. Investors will want to monitor the momentum over future quarters, but the automotive loan market is worth $672 billion, which is a dramatic expansion of Upstart's potential market.

Further, the company intends to go after virtually every lending category. On the Q3 earnings call, management said that it will also be entering mortgages and "small-dollar loans" over the next few years. Investors need to keep in mind that the company will face execution risk as it pursues those new markets, but Upstart is expanding its potential market by multiples, and its upside is immense if it succeeds to the degree that it has thus far in personal loans.

Developing and staffing its expansion into new markets will require financial resources. Analysts expect Upstart to end the 2021 fiscal year at approximately $806 million in revenue, a 246% increase over 2020.

Upstart is already profitable despite the investments it's making in rapid revenue growth. Indeed, it generated positive net income every quarter since Q3 2020. And it's accelerating the rate at which it's stacking cash on its balance sheet. Through the first nine months of fiscal 2020, Upstart's business burned through $52 million, but it generated $179 million in cash flow through the first nine months of 2021.

It now has $1 billion in cash on the balance sheet, up from just $250 million at the end of 2020, thanks to both its improving cash flow and a $575 million secondary stock sale in August. As the business grows and feeds management the money it needs to pay for further growth efforts, that cash total could continue to increase.

Is Upstart stock a bargain now?

Due to its recent stock price decline, Upstart's valuation has fallen from a forward price-to-sales (P/S) ratio of nearly 40 (based on next year's estimated revenue) down to 17. That's a very reasonable forward P/S ratio in its segment. There are other technology companies with forward P/S ratios of more than 30 that aren't even profitable yet. 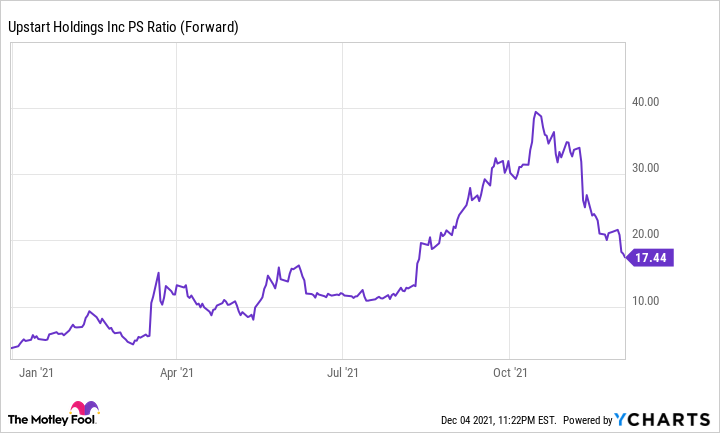 It's important to remember just how early this tech company is in its journey. There are more than 10,000 banks and credit unions in the U.S. alone -- so far, it has partnered with just 31 of them. Meanwhile, lending categories beyond personal loans could give it a lot of room to grow for years to come. Given the long-term potential of Upstart's platform, buying its stock in the wake of its recent pullback could prove to be a profitable investment decision.