Since the 1980s, the FICO score has remained the standard in determining consumer credit risk. But lending technology company Upstart Holdings (UPST -9.01%) uses artificial intelligence to better understand consumers' likelihood of paying back a loan than a FICO score can. By making lending smarter, here's how Upstart's platform could benefit consumers, lenders, and investors alike.

Upstart's AI uses more than 1,000 variables to judge a potential borrower's creditworthiness. The company has spent eight years training its platform with 10 million-plus data points to help banks make more profitable loans -- and the more customers use Upstart's service, the more effective it gets.

Whether Upstart is leasing its platform to banks to use in-house, or accepting loan applications directly from consumers to pass on to its partner banks, it gets more consumers approved and helps banks loan more efficiently -- a win for everyone. Upstart claims that banks can reduce their default rate by 75% while maintaining the rate at which they approve loans. 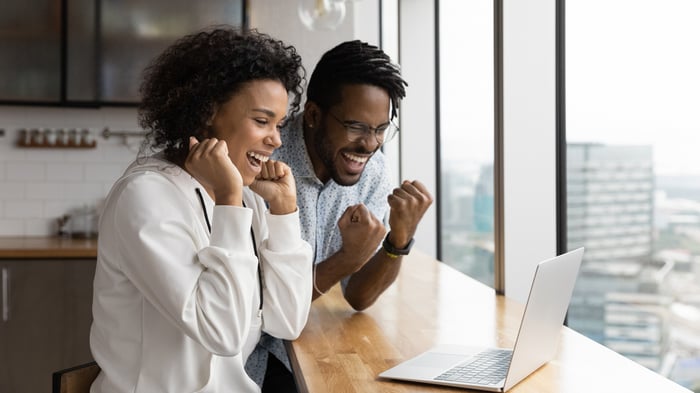 The lending space is highly competitive, and Upstart isn't the only banking company leveraging artificial intelligence. However, it uniquely remains neutral in the banking relationship by not underwriting loans. Many of Upstart's competitors are trying to also function as lenders, putting them at odds with Upstart's customers.

A massive runway for growth

There are more than 5,000 banks in the United States, holding trillions of dollars' worth of loans. Most of these banks are smaller, operating at the local and regional levels, Upstart's target customer. Upstart works with just 18 of those banks currently, leaving a long runway to expand. Its first-quarter revenues grew 90% year over year, and management is guiding full-year 2021 revenue at $600 million, up 157% over 2020.

Focusing on Upstart's loan origination growth reveals how quickly the core business is growing, because it shows how lenders are adopting Upstart's platform better than a gross customer count would. Originations totaled 170,000 in Q1, up 102% year over year. Borrowers are showing more interest in Upstart's loans, too; its conversion rate on loan requests increased to 22% in Q1 from 14% in the prior year.

Until recently, Upstart has primarily focused on personal loans. But the company originated its first auto loan in September 2020, and it's acquiring automotive retail software company Prodigy for undisclosed terms to help roll out its automotive lending to most of the U.S.

The consumer lending industry includes student loans, mortgages, and credit card originations -- all potential verticals for Upstart. The company hasn't announced any concrete plans to enter these markets, but if it decides to spread beyond consumer and auto loans, it could dramatically increase its total addressable market -- giving Upstart more room to grow in the years ahead.

A young company with potential risks

Upstart is just getting started, so investors need to look out for some potential risks. Upstart's success has come from a small sample size. Just two of the 18 banks it works with contribute 85% of Upstart's fee revenue.

As Upstart continues to expand its customer base, competitors might try to replicate its vital AI. Upstart has developed its algorithms over eight years, benefiting from a head start on most of its competitors. Large banks might have the money to hire data scientists and customer data to catch up to Upstart, but the company's local and regional target customers lack these resources. These smaller lenders benefit the most from working with a neutral platform such as Upstart versus their deep-pocketed, very large banking rivals.

What to think of Upstart's recent dip

Upstart's share price surged to all-time highs after strong first-quarter earnings, but it's come down recently because the company's lock-up period expired this week. When this happens, insiders, employees, and pre-IPO investors are allowed to sell their shares. These stakeholders are often sitting on significant gains, so it's typical to see them sell at least some of their shares.

It doesn't mean anything for Upstart's business. Even after those sales, insiders still own more than 15% of shares outstanding, CEO and founder Dave Girouard owning the majority of shares, so shareholders can feel comfortable investing alongside management that has "skin in the game."

Upstart needs to grow its customer base to lower its dependence on its current biggest revenue sources. Its algorithms must continue to approve more loans with fewer defaults for banks, so that Upstart can attract new customers and partnerships. But if it continues to succeed, Upstart could be writing the beginning of a long-term growth story for fintech stock investors.

Upstart Is Down BIG! Buy, Hold, or Sell?