Electric vehicle start-up Rivian Automotive's (NASDAQ:RIVN) November debut on Wall Street was one of the most hyped initial public offerings in recent memory. Its market cap is already more than $80 billion, and shareholders are hoping it becomes the next Tesla (NASDAQ:TSLA).

With high demand for its upcoming vehicles and a large deal to supply vans to Amazon, Rivian could be a long-term winner. However, based on several short-term red flags, investors might wind up disappointed with the company in 2022.

Rivian doesn't have a demand problem, as evidenced by the 71,000 pre-orders it reported for its R1 models and a 100,000-vehicle order that it has from Amazon for delivery vans. But its investors need to consider just how difficult it is to develop the infrastructure required to mass-produce vehicles efficiently. Tesla CEO Elon Musk once tweeted that "the machine that makes the machine is vastly harder than the machine itself." In other words, designing and building one car is far easier than setting up assembly lines that can churn out hundreds of thousands of them.

In the third quarter, Tesla produced 237,823 vehicles, so its annual vehicle production run rate is still under a million nearly a decade after it launched the Model S. Rivian can have all the pre-orders and demand it wants, but those won't translate into revenue until it builds and delivers the vehicles. Difficulties with its production ramp-up could hinder the EV company's growth over the next several years.

In Rivian's Q3 shareholder letter, the company noted that it had produced a total of 652 R1 vehicles. Management also said that despite having the installed capacity to manufacture 150,000 cars a year at its factory, it would fall "a few hundred" units short of its 1,200 vehicle production goal for 2021. Again, building complex systems for automotive production is hard. It's possible that it  could be several years before Rivian dramatically increases its production rate.

Rivian's efforts to ramp up production could significantly impact its financials. Right now, the balance sheet is well stocked; if you consider all of the proceeds from its initial public offering, it has almost $20 billion in cash on hand. Meanwhile, the company burned through about $1.5 billion on operating activities in the first nine months of the year. Based on those figures, one might expect that $20 billion would be enough to support Rivian for years.

However, it could go through that cash stockpile faster than you'd think. Building vehicles is expensive. Automakers become profitable by eventually reaching a high enough production level that revenue begins to outrun the costs. The chart below illustrates how long it took Tesla to accomplish this. As the company initially began producing more and more cars, it spent more money, with its free cash flow deficits peaking in 2017-2018. 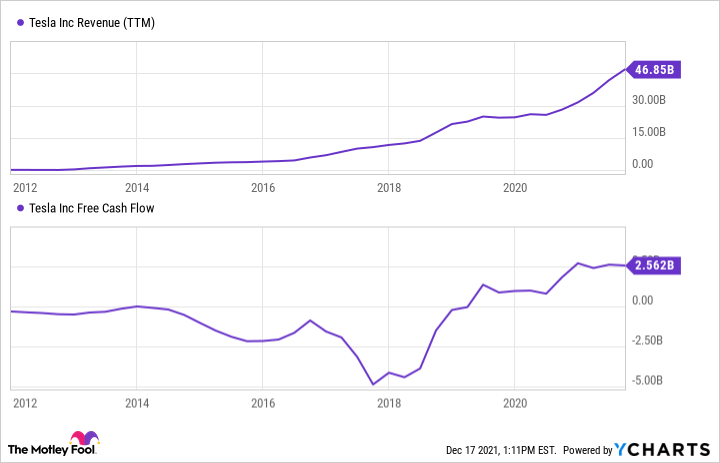 Now, Rivian is investing heavily in expanding production, including labor, machinery, and new factories. It announced plans to build its second factory, beginning in 2022, with an estimated cost of $5 billion. Rivian may need to raise more money down the road to cover those expenses, which could dilute its shareholders if it does so by issuing additional stock.

The valuation is pricing in a lot of optimism

Tesla has been such an outstanding stock for long-term shareholders because it spent years as the underdog. Many people thought the company would fail. As recently as January 2020, Tesla's market cap was roughly $120 billion -- and it delivered $31.5 billion in revenue that year.

Rivian might not even hit $100 million in revenue this year, but it's already valued at $85 billion. Meanwhile, it still needs to prove that it can successfully execute and achieve all of the milestones that investors are essentially giving it credit for in advance.

In this high-inflation environment where investors are selling off speculative stocks in part due to concerns about rising interest rates, Rivian is the type of stock that could be vulnerable. It's not that it can't be a great company. It just isn't one yet, and the market is pricing it like the war is already won. In reality, Rivian hasn't even started the real battles yet. Investors should keep that in mind when considering this stock.