Please ensure Javascript is enabled for purposes of website accessibility
Log In Help Join The Motley Fool
Free Article Join Over 1 Million Premium Members And Get More In-Depth Stock Guidance and Research
By James Brumley - Jun 16, 2022 at 9:15AM

Most of the stocks that make up the S&P 500 (^GSPC 0.23%) have been down for the past few weeks, but some have been downright beaten to a pulp. While plenty of these steeply sold-off names may have further to fall before finding a bottom, a handful of good stocks have already given up more ground than they should have. Here's a closer look at three of these tickers that are more than ready to rebound.

Weakness from online travel agent Expedia Group (EXPE -0.31%) made sense in the early days of the COVID-19 pandemic. Leisure travel was essentially shut down, and few people wanted to take a vacation in the midst of a pandemic anyway. As boredom set in and the world (more or less) got a grip on the coronavirus, travel resumed. So did Expedia's stock's pre-pandemic rally.

Then in early May, it all unraveled again. Expedia shares now sit more than 40% under April's close, reaching new 52-week lows just this week. The company's fiscal first-quarter report and accompanying discussion indicated the omicron variant of the coronavirus -- followed by Russia's invasion of Ukraine -- took a bigger toll on the company's bottom line than expected and could continue to do so. Although Expedia might have been able to push through this worry, troubling guidance from Hilton Worldwide released around the same time was translated as serious trouble for the entire industry, including Expedia.

As is so often the case, though, investors are collectively overreacting to one company's concern without looking at the bigger picture. That picture says, whether it's complicated or not, consumers cooped up for too long are still looking to travel. Since Hilton's alarming outlook was released, Delta and United Airlines both upped their revenue guidance for the quarter currently underway, with Delta's outlook indicating a full return to pre-pandemic levels. Also since Hilton's warning, research outfit GlobalData has indicated international departures are on a multi-year growth trajectory that will reach pre-pandemic levels by 2025.

To this end, analysts still expect Expedia's top line to swell to the tune of 38% this year and grow another 16% next year, which is likely to result in a bottom line of just over $10 per share for 2023. The stock is modestly priced at only 10 times that earnings projection right now.

Kitchen appliance maker Whirlpool (WHR -0.13%) seems like one of those companies that are perpetually plagued by some sort of problem. If not supply chain woes, then international trade headaches. If not trade headaches, then competition. If not competition, then inflation. You get the idea. A combination of all three challenges, in fact, is the reason shares are down by 35% this year.

The funny thing is, given enough time, Whirlpool seems to always be able to navigate past its problems.

The graphic below puts the matter in the proper perspective. While neither has moved in a perfectly straight line en route to their current levels, revenue, as well as per-share earnings, are measurably bigger now than they were 10 years ago. Profits, in fact, appear to have been boosted in a big way by the pandemic, after millions of consumers took their lockdown time and spent their stimulus money upgrading their homes. 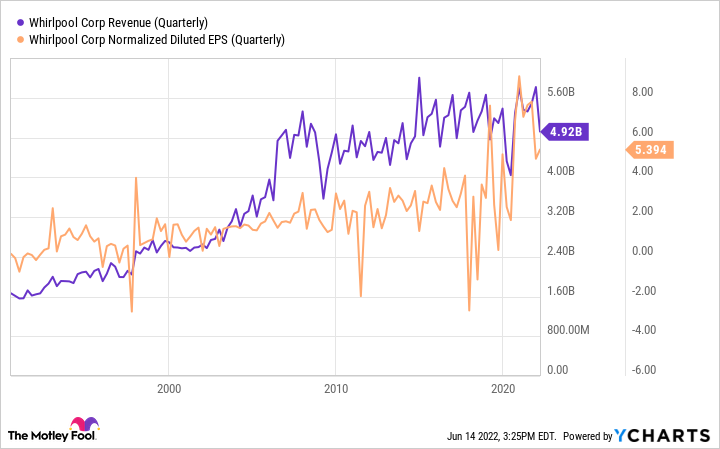 It will never be a high-growth machine, to be clear. Revenue is projected to be flat this year, while inflation is likely to take a bite out of profits. The world is still grappling with the lingering coronavirus contagion, as well as Russia's invasion of Ukraine. Things should stabilize next year, but even so, analysts are only calling for a little less than 3% revenue growth from Whirlpool, paired with similarly modest earnings growth.

Down by more than a third of its value in just a few months, though, it's not a stretch to suggest the sellers have gone too far. They'll likely correct their mistake once they realize this reliable company's stock is only priced at around six times next year's consensus earnings estimate of $26.12 per share.

Finally, add Intuitive Surgical (ISRG -0.05%) to your list of S&P 500 stocks primed for a major recovery sooner than later.

It's not a household name, though there's a chance you or someone in your household has benefited from its primary product. Intuitive Surgical is the company that makes the Da Vinci surgical robot. After being on the market for more than two decades, Da Vinci units have handled more than 10 million surgical procedures.

There's no end in sight either. The platform is not only effective but also expandable. Back in 2019, before the pandemic took hold, for instance, the company won the Food and Drug Administration's clearance for its SynchroSeal attachment that makes sealing vessels in the body easier and faster. Earlier that same year, the FDA allowed the Da Vinci device to perform a wider range of tonsillectomies and tongue base resections than it was previously permitted to handle.

With the COVID-19 pandemic finally winding down, don't be surprised if the Da Vinci and the company's other surgery-performing hardware start winning more approvals for additional uses again. That's what this year's expected 12% revenue improvement suggests will be the case anyway, to be followed by 13% growth next year that should coincide with record-breaking earnings of $5.81 per share.

Investors haven't been impressed by this growth potential of late, allowing Intuitive's shares to be nearly halved just since the end of last year. Like so many other tickers, this one is struggling with the lingering fallout of the pandemic as well as its own supply chain problems.

Think bigger picture, though. All of the problems currently plaguing the stock are temporary ones and will eventually give way to the demand that's evident for the Da Vinci's capabilities.