The easiest means of buying Mexican stocks is the same answer I'd give to anyone looking to invest in any foreign country: Just buy the ETF. 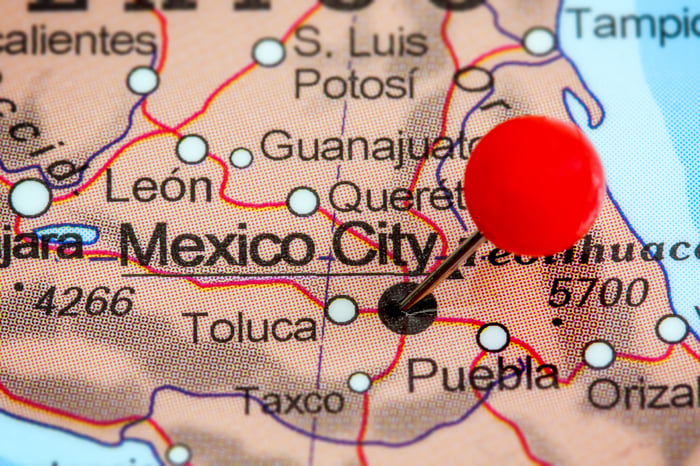 That said, if you ask me, the better way to invest in Mexican stocks is the same way investors buy American stocks. Examine the prices of individual companies, determine whether or not they offer good value before trading, and once you've found a winner -- buy, buy, buy!

Want a few ideas to start off with? Here are five mid-cap Mexican stocks, all trading for P/E ratios cheaper than the average 24.3 P/E on our very own S&P 500, all expected to post positive earnings growth over the next five years, and most paying better dividends to boot.

Which of these five Mexican stocks might make for a rewarding investment for American investors? Opinions will certainly differ, but here's how I look at it.

Up above, we see three "grupos," but one of them is not like the others. Unlike Grupo Aeroportuario del Centro Norte and Grupo Aeroportuario del Pacifico, both of which operate publicly traded airports, Grupo Financiero Santander Mexico is a bank. It's a very good bank, boasting superb returns on both assets (1.5%) and equity (15.8%), numbers you'll be hard pressed to match among similarly sized U.S. regional banks like Regions or Fifth Third. But it's also a rather expensive bank, selling for 2.3 times book value -- about twice the valuation of U.S. analogs.

As for the two airport grupos, del Centro Norte and del Pacifico also sell for pretty steep valuations. In contrast to banks, which are often judged on their book value, I look at these two from a P/E perspective. Valued at 22 and 23.5 times earnings, respectively, both stocks are cheaper than the average cost of stocks on the S&P 500. That said, weighed on their own merits, I think they're rather expensive relative to their low-single-digit growth rates.

At first glance, cement maker Cemex and soda bottler Coca-Cola FEMSA both appear to suffer from the same problem: Their P/E ratios look too high relative to their growth rates to make them attractive for investment. After all, if all you want is a 5% growth rate, you don't have to rummage through emerging markets and find a Mexican coke bottler -- Coca-Cola itself is expected to grow 5% right here at home!

Dig a little deeper, though, and you may find something surprising: Both Cemex and Coca-Cola FEMSA have a habit of reporting GAAP net income significantly lower than the cash profits they are actually producing. Last year, for example, Cemex generated nearly $1.7 billion in free cash flow, but reported only $681 million in net income. Similarly, Coca-Cola FEMSA, for which more up-to-date cash flow information is available, posted free cash flow of $1.4 billion over the past 12 months -- nearly twice its reported GAAP net income of $779 million.

Whether you're investing in American stocks or Mexican stocks, at home or in emerging market countries, never pass up the chance to grab a good dividend on top of a cheap stock.