The Mexican economy has exhibited steady growth over the last 10 years, bolstered by manufacturing, tourism, and a generally favorable trade relationship with the rest of the world. But volatility between the Mexican peso and the U.S. dollar often scares investors away from investing in Mexican stocks.

As the chart above shows, the peso lost about 75% of its value against the dollar between the spring of 2013 and year-end 2016, though it's staged a comeback in 2017, gaining 17% on the greenback since the beginning of the year. A depreciating peso cuts into the returns of Mexican American depositary receipts, or ADRs, the share type that foreign-listed corporations typically utilize to trade on U.S. exchanges. Of course, the opposite also holds true: A strengthening peso favorably boosts Mexican ADR returns.

Grupo Financiero Banorte (OTC:GBOOY) is a bank holding company primarily in the business of retail, corporate, and wholesale banking. It also engages in brokerage, insurance, and warehouse and logistics operations. With total assets of $70 billion, Banorte, as the company is more commonly known, ranks as one of the five largest Mexican banks by assets, and its 7,756 branch ATM network (as of year-end 2016) is the third largest in Mexico.

Banorte grew tremendously through acquisition in the mid 1990s, when the Mexican peso crisis forced a wave of bank consolidation. It continues to acquire smaller rivals, but it's also expanded into the U.S. market, acquiring a 70% stake in Texas-based community bank Inter National Bank in 2006.

The company's current strategic focus is on profitable corporate and consumer loan growth, as well as the development of its insurance business. Banorte typically enjoys extremely high margins: The bank produced a net profit margin of 30% over the last trailing 12 months.

Due to its profitability, Banorte's current dividend yield of 4.8% translates to a payout ratio of just 37.9%. Moreover, the company is attractively valued, trading at a trailing-12-month price-to-earnings ratio of 17.5. 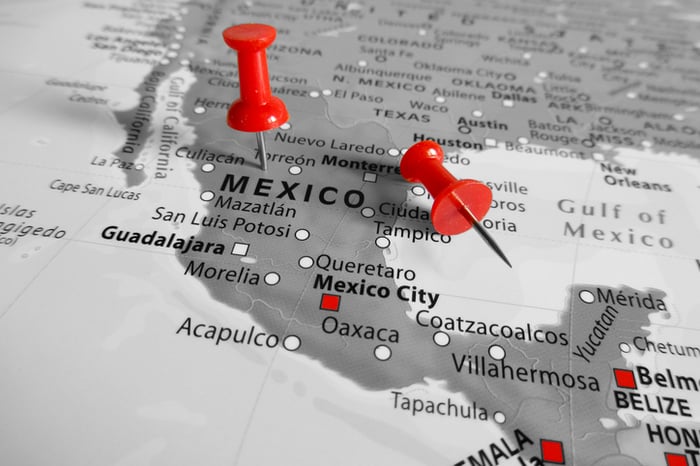 Grupo Aeroportuario Del Pacifico (NYSE:PAC), or GAP, as it refers to itself in shorthand, was formed in 1998 when the Mexican government divested 35 of Mexico's 58 airports and split them among four holding groups.

GAP now operates 12 domestic airports in Mexico, and recently expanded into the global airport business with its 2015 purchase of Sangster International Airport in Montego Bay, Jamaica.

GAP has benefited from the growth in the Mexican economy as domestic travel has swelled, and international business and leisure travel have also climbed. Accordingly, terminal traffic, a primary revenue driver, is currently trending up: In 2016, domestic terminal traffic jumped 21.5% to nearly 22 million passengers.

GAP's current dividend yields just under 2%, and its slightly high payout ratio of 65 sits toward the upper end of an acceptable reading. In addition, at nearly 33 times trailing-12-month earnings, shares aren't cheap. Yet the company is poised to benefit from Mexico's economic growth, and in a regulated competitive environment, its revenue stream is quite stable. Investors have duly recognized GAP's potential: Shares have posted a tremendous 273% gain over the last five years on a total return basis.

Founded in 1952 as a small commercial egg operation, Industrias Bachoco has blossomed into the largest poultry producer in Mexico, and the country's second-largest egg producer. Industrias Bachoco (NYSE:IBA) is notable for its brisk growth rate, having expanded its top line at a 13% clip annually over the last five years.

In 2011, the company purchased U.S. based O.K. Foods to gain a foothold in the lucrative American poultry market. Through further purchases, Industrias Bachoco now owns breeding and production assets in Arkansas, Georgia, and Oklahoma, and estimates that it currently holds a 1.8% share of the U.S. chicken products market.

The U.S. foothold is important as the U.S. is the world's largest chicken producer and a dominant chicken exporter, with Mexico as a primary market. Thus, it's logical for Bachoco to pour in resources north of the border. Better yet, Industrias Bachoco is still a relatively small player in the global poultry industry. The company's modest $2.5 billion revenue haul last year indicates that its best market share wins may still lie ahead.

The poultry producer's current dividend yield is 1.38%, but a payout ratio of 19.9% foretells expansion of the payout in years to come. In sum, don't be chicken; check out Bachoco for both top-line acceleration and the potential for heftier dividend checks in the future.

Holding company Fomento Economico Mexicano (NYSE:FMX), or FEMSA, as it's more commonly known, can claim through its subsidiary Coca-Cola FEMSA (NYSE:KOF) the title of the largest franchise bottler of Coca-Cola in the world.

FEMSA traces its origins all the way back to 1890, when the first brewery in Mexico, Cerveceria Cuauhtemoc, was formed. While it's taken more than a century to reach a dominant global bottling position, in the last eight years, FEMSA has branched out beyond well beyond sodas.

The march to diversification began in 2010 when FEMSA traded 100% of its long-held stake in the Cerveceria Cuauhtemoc brewery for a 20% interest in beer giant Heineken Group. In 2015, FEMSA began to acquire service stations of the Mexican state-owned petroleum company, Petroleos Mexicanos, or Pemex, and operate them as franchises.

Acquisition-minded FEMSA is gearing up for many more decades of growth. While the organization diversifies, it still aggressively seeks to expand bottling operations and protect its title as the world's largest franchise Coca-Cola bottler. FEMSA's current dividend yields 1.3%, and its payout ratio sits below 50%, at 45.7%. As FEMSA's investments in multiple industries begin to pay off, and operating cash flow rises in turn, look for this dividend to ascend.