That's how many iPhone 5 units Apple (NASDAQ:AAPL) ended up selling over launch weekend. Investors promptly expressed their disappointment with that figure, as shares dropped by nearly 2% in pre-market trading after the company made the announcement. Apple is the only company in the world where it pulls at least $3.3 billion over a weekend for one product and leaves investors still wanting more.

Some perspective
Many of its smartphone rivals might take an entire quarter to sell 5 million units. For example, Motorola's last public quarter before being swallowed by Google (NASDAQ:GOOGL) saw 5.1 million smartphones shipped. Research In Motion (NYSE:BB) shipped 7.8 million BlackBerrys last quarter, and Nokia's (NYSE:NOK) figure totaled 10.2 million. Those are all quarterly digits that took three months to garner, so 5 million in three days is hardly a small thing.

Over the summer, Samsung said it had sold 10 million units of its Android flagship, the Galaxy S III, in two months. That device continues to trounce the rest of its Android brethren for the time being, despite Sammy's legal troubles with Cupertino.

Still, most investors were expecting Apple to sell more this weekend -- myself included -- so this really boils down to the expectations game. I had figured sales of 6 million to 8 million units were easily within reach, considering the 2 million pre-orders made within the first 24 hours alone. 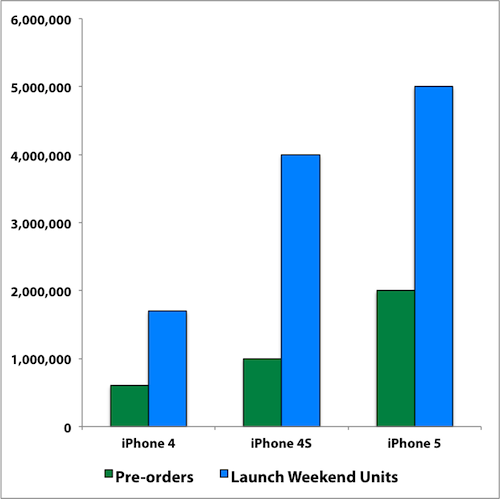 Longtime Apple bull Gene Munster (of Piper Jaffray) predicted that Apple could potentially sell as many as 10 million units during launch weekend, double what Apple actually posted. The real questions for investors are: 1. Why did Apple come up short? 2. Is there cause for concern?

Supply side
This launch weekend all came down to a lack of sufficient supply to meet demand, plain and simple. Don't just take my word for it; CEO Tim Cook made it clear at point blank range:

Demand for iPhone 5 has been incredible and we are working hard to get an iPhone 5 into the hands of every customer who wants one as quickly as possible. While we have sold out of our initial supply, stores continue to receive iPhone 5 shipments regularly and customers can continue to order online and receive an estimated delivery date. We appreciate everyone’s patience and are working hard to build enough iPhone 5s for everyone.

That paints a clear picture that the demand side of the equation is rock-solid; Apple simply can't build enough of them to go around. Even now, new orders placed on Apple's web site are quoted shipping times of three to four weeks, pushing those sales into October and fiscal 2013.

Remember that Cook made a "bold bet" with the iPhone 4S launch, ordering up a massive number of units and hitting the current quarterly record of 37 million. With this year's pre-orders doubling last year and an even more aggressive rollout schedule, rest assured Cook would have bet just as bold this year -- if he could.

Don't say I didn't warn you
This is where constraints within Apple's supply chain are coming into play. Taiwan Semiconductor Manufacturing has been faced with 28-nanometer constraints all year, so it wasn't hard to see this one coming. Apple's baseband supplier Qualcomm (NASDAQ:QCOM) taps TSMC for the majority of its chip production, including its latest 28-nanometer baseband chips found in the iPhone 5. Qualcomm's been working to mitigate those bottlenecks by tapping other suppliers, but it could still potentially be the weakest link.

Another possible culprit could be Sharp, which had initially faced weeks of delays in manufacturing the new in-cell touch display panels used in the iPhone 5. The other two suppliers, Japan Display and LG Display, had already begun shipping panels to Apple, but Sharp was tardy to the party.

I warned you these two critical ingredients could potentially hold back the iPhone 5. This is far from conclusive evidence that the basebands or display panels are the culprit(s), but if the shoe fits…

All's not lost
After opening lower, Apple shares began to recover some of their losses. While the 5 million figure could have been better, there's no long-term cause for concern. iPhone buyers are typically rather loyal, so these are just delayed sales, not lost sales, and all the more reason why next quarter will be a monster.