As per usual, as soon as Apple (AAPL 2.45%) launched its iPhone 5 into the hands of millions of anxious buyers, some of those hands wanted nothing more than to pry the shiny new device apart and take a gander at its guts.

The usual suspects at iFixit -- with some assistance from their friends at Chipworks -- never disappoint. Let the teardowns begin.

No alarms and no surprises please
Just like the iPhone 5 announcement itself, there weren't really any major surprises lurking beneath the in-cell touch display. Careful watchers and analysts already had a pretty good idea of what component suppliers Apple was tapping, and hopefully you were already caught up to speed by reading my comprehensive iPhone 5 supplier report. 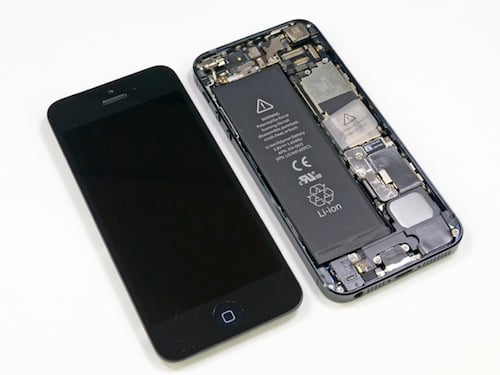 Without further ado, here's a list of some of the more critical ingredients found inside and what that means for investors.

Baseband processor: There was never any doubt that Qualcomm (Nasdaq: QCOM) would take the cake in the baseband processor. As suspected, the 28-nanometer MDM9615 is serving up the LTE, along with a whole slew of other cellular standards. We can now officially stop wondering if Apple will partner with China Mobile, and focus our speculative efforts of when that deal will be inked.

Image sensor: Unfortunately, OmniVision Technologies and Sony investors will have to wait a bit longer to see who won this spot. Identifying this sensor is a painstaking process, one that we'll have to wait for Chipworks to perform. I suspect OmniVision was the winner here, primarily because of its monstrous revenue guidance in the current quarter to all-time highs of $355 million to $390 million, but in fairness I thought they won last year (and I was absolutely wrong).

3-axis accelerometer and gyroscope: The supplier of this relatively uninteresting component continues to be STMicroelectronics. No shockers here, but also less opportunity for investors because its MEMS segment, while the company's largest, comprises just over a third of sales.

Audio chips: Again we find Cirrus Logic (Nasdaq: CRUS) providing the Apple-branded audio codec. There are no clues as to whether or not Audience was indeed cut from the iPhone 5 as the company suspects it was. Its IP was integrated into last year's processor, and as expected, there's no sign of its digital-signal processor hardware.

Wi-Fi module: The Wi-Fi module looks to contain a new Broadcom chip, the BCM4334, in addition to Skyworks front-end chips. The BCM4334 is notable because it debuted earlier this year. Broadcom's chip has moved down to a 40-nanometer manufacturing process and the company claims it has reduced power consumption by a whopping 40% to 50%. This dual-band chip will help boost the iPhone 5's Wi-Fi capabilities.

Prior to the launch, I had predicted the top winners to be Qualcomm, Cirrus Logic, and Broadcom. That's mostly played out here, as all three maintained their lucrative design wins.

Different down under
One minor thing to keep in mind is that iFixit's unit is from Australia, and there are three distinct iPhone 5 models for different countries (and LTE bands). The differences between models will be negligible, and in the U.S. AT&T users will get the GSM model and Verizon and Sprint Nextel users will get the CDMA model.

With 2 million preorders in the bag and launch weekend estimates as high as 10 million units, companies pitching in behind the scenes (and their investors) are set to ride the iPhone 5's coattails to riches.