Shares of Zynga (NASDAQ:ZNGA) hit a 52-week and all-time low on Friday. Let's look at how it got here and whether more downside is ahead.

The social-game maker is having difficulties transitioning off of relying on Facebook (NASDAQ:FB) and onto mobile platforms. Its strategy has entailed risky acquisitions that haven't paid off. Last week, the company preannounced third-quarter figures and updated its full-year outlook, and the digits weren't good.

Revenue in the third quarter should be between $300 million and $305 million, while bookings is expected to be about $50 million below sales. That doesn't bode well for Zynga's future revenue pipeline, as it's using up its deferred revenue balance faster than it can sell more virtual goods. The company expects to see a GAAP net loss of $90 million to $105 million this quarter.

Zynga's valuation is approaching a level that could pique the interest of bargain hunters. Its market cap is just under $1.9 billion, getting within the general proximity of the $1.6 billion in cash it was sitting on at the end of June. Even factoring in the $100 million in long-term debt only brings its net cash to $1.5 billion. Still, if Zynga continues blowing cash on dubious acquisitions that it proceeds to write down just six months later, that cash won't go as far as investors might think.

How it stacks up
Let's see how Zynga compares to some of its game making peers. 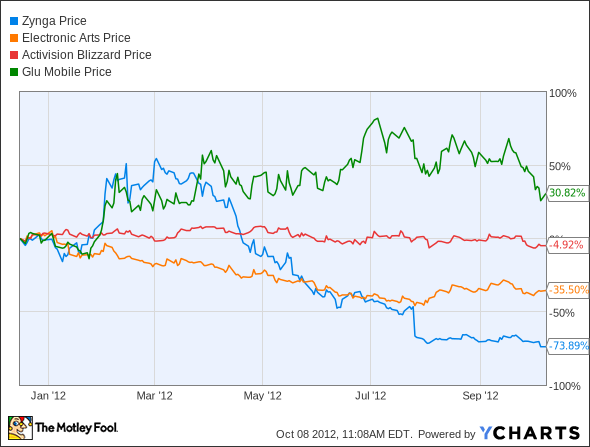 We'll throw some fundamentals into the mix.

What traditional game makers like EA and Activision lack in revenue growth, they make up for in profitability and brand strength. Glu similarly uses the freemium model that Zynga employs, and both companies are accustomed to red ink.

What's next?
Zynga went public less than a year ago, and it clearly can't continue relying on Facebook for its players. In its hopes to transition away from the social networker, it's introduced itself to a slew of new risks that it doesn't appear to be managing very well. Read all about the major risks facing Zynga by checking out this new premium ticker report, where I lay out all of the company's faults. On the flip side, there are a couple of opportunities that could yield upside for Zynga. Want to know more? Click here to get started.