As an investor in domestic automotive companies, I know a lot of hope is attached to emerging markets overseas. General Motors (NYSE:GM) is ahead of Ford (NYSE:F) in vehicle sales in China, and both will be chasing after growing middle class markets in the other BRIC (Brazil, Russia, India, China) nations. Honda (NYSE:HMC) and Toyota (NYSE:TM) have recovered from natural disaster supply disruptions, allowing Toyota to reclaim its title as global sales leader. Although the U.S. market is surging, it's a mature market; as an investor I need to know where the future growth will come from. I sought out to better understand which trends would dominate the future, and where vehicle sales growth would come from. I also wanted to investigate what risks companies face internationally.

America the trendsetter
The trick for automakers is to figure out future trends developing in markets and better understand the consumer. No easy task, for we consumers are finicky creatures -- just when they figure out what we want, we change our minds. In mature U.S. and European markets, we're in the process of downsizing or finding more fuel-efficient vehicles, and I expect it to be similar in emerging nations. That isn't the case -- consumers in BRIC nations toss aside environmentally friendly vehicles and ignore high fuel prices thanks to their desire for larger cars and SUVs. I guess that shouldn't surprise me, as emerging markets tend to follow the recent trends of developed nations. We see it in movies and music, so why not other consumer products such as vehicles? The Chinese consumer really likes the SUV; it was the fastest-growing segment in the Chinese auto market with a 24% year-over-year increase for the first 10 months of 2012. Below is a graph representing the percentage of automotive executives polled who believe a certain segment would increase, as well as which vehicles are positioned in each segment. 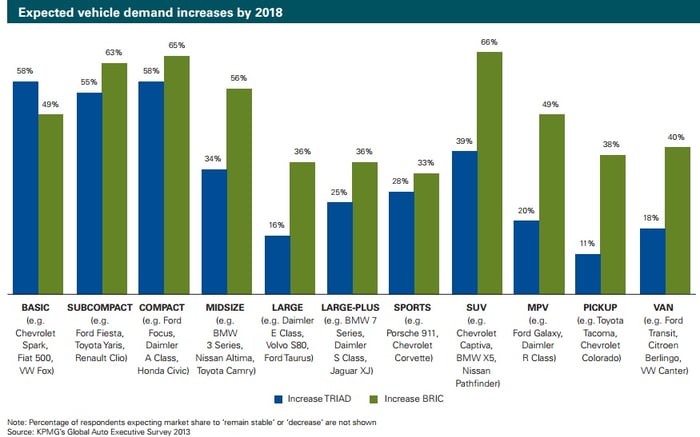 The graph reveals a stunning trend of SUV sales increasing in BRIC nations while decreasing in the U.S., Europe, and Japan. The basic, subcompact, and compact segments are likely to increase in each segment. Companies with multibrand lines that can produce efficiently around the globe are better positioned to take advantage of these trends. The next thing to understand is how much sales growth, and how fast, the BRIC nations will contribute.

BRIC explodes
Over 61% of executives believe that within six years BRIC consumers will be demanding the same levels of quality and reliability as those in mature markets. Automakers will be excited to give those consumers what they want, as 47% of the executives polled foresee the BRIC share of total new car sales to be between 41% and 50% by 2018. That's a drastic increase, and right around the corner. Let's take a more specific peak at who is investing, and where. 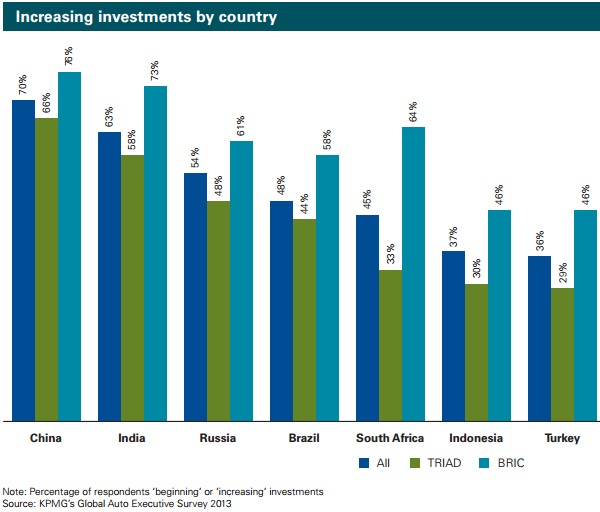 I find two intriguing things in that graph. One, that the biggest discrepancy is South Africa, where the BRIC nations were much more willing to invest than the the U.S., Europe, and Japan. This is likely due to ease of transition, such as auto manufacturers from India having many similar operational parameters, including road conditions and left-lane driving.

More important, though, is the competition BRIC could bring to world markets. Those nations are now predicted to ramp up their investing and production faster. Investors often think that while global sales increase, it only means more money for the global players who dominate at present. That may not be the case as BRIC markets could increase global competition just as fast as they increase sales. Let's investigate predicted exports and how fast this will take place.

Those aren't home-run percentages, but it's clear that people entrenched in the automotive business believe the day is fast approaching when BRIC nations will be competing globally. If that doesn't have domestic investors a bit worried, this next paragraph will.

Restrictions increase
Naturally, as the BRIC nations begin to ramp up production quality and quantity of exports, they'll be defending their home turf as well. Executives polled believe regulations that include import and export duties, government interventions, and market entry barriers will increase for companies trying to export to BRIC nations. Let's take a look at the top two areas of interest, China and India, and see what is expected to rise the most. 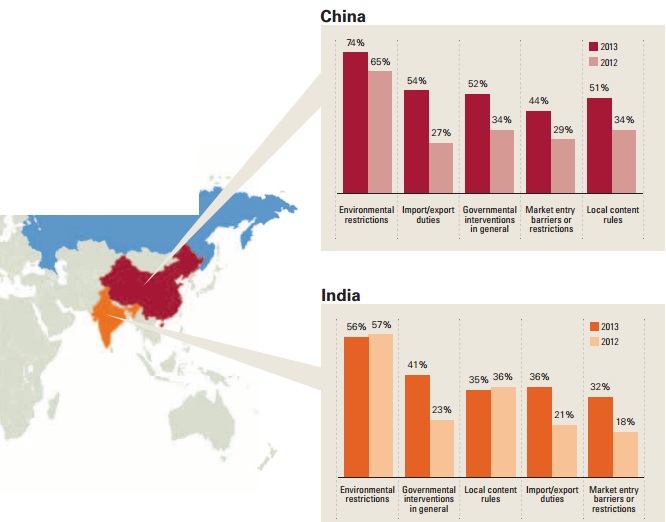 Bottom line
Import/export duties are predicted to increase the most, and that could play a large role for domestic companies trying to maintain higher margins. There will be ways, such as Ford's joint ventures in China, to minimize costs. However, it's clear that it will be more difficult to sell vehicles internationally due to increased competition and restrictions on importing and exporting. Investors will need to keep an eye on international expansion to see which companies are poised for success using different strategies. Volkswagen is making vehicles in China with its specific consumers' tastes in mind, and the strategy appears to be working well. Ford will be focusing on selling platforms with similar features globally, making it efficient. The bottom line is that the competitors in the automotive industry markets will be changing quickly -- make sure you don't get left behind.