"Dogs of the Dow" is the name given to one of the simplest dividend strategies for beating the market. Over the coming year, I'll track the Dogs' performance and keep you abreast of news affecting these companies.

The strategy
The Dogs is an investing strategy that buys and holds equal dollar amounts of the 10 best-yielding dividend stocks of the Dow Jones Industrial Average (^DJI -0.85%). The strategy banks on the idea that blue-chip stocks with high yields are near the bottom of their business cycle and should do much better going forward. Investors in the strategy then would not only get large dividends but also gains in the stocks underlying those dividends.

High-yield dividends
High-yield portfolios are often dismissed as inferior to their growth counterparts for various reasons:

Evidence compiled by Tweedy Browne refutes these falsehoods. Research shows that portfolios of high-yield dividend stocks outperform lower-yielding portfolios and the market in general. In fact, a study by noted finance professor Jeremy Siegel found that over 45 years, the highest-yielding 20% of S&P 500 stocks outperformed the S&P 500 by three times! The highest-yielding stocks turned a $1,000 investment in 1957 into $462,750 by 2002, compared with $130,768 if the same money was invested in the index.

Check out the Dogs' performance in 2013 so far:

The big news affecting the Dow this week was concerns over the strength of the U.S. jobs market. On Wednesday, ADP's private-sector jobs report showed an addition of just 158,000 positions in March, down from 237,000 in February. Further poor news came the next day, when government-reported weekly new unemployment claims jumped to 385,000 from the previous week's 357,000.

Investors went into Friday with low expectations for the government's official jobs report, and it still came in far below those lowered estimates. The government reported U.S. jobs growth of just 88,000 jobs in March, down from 268,000 jobs added in February. Analysts had been expecting jobs growth of 190,000, so this was a big miss. 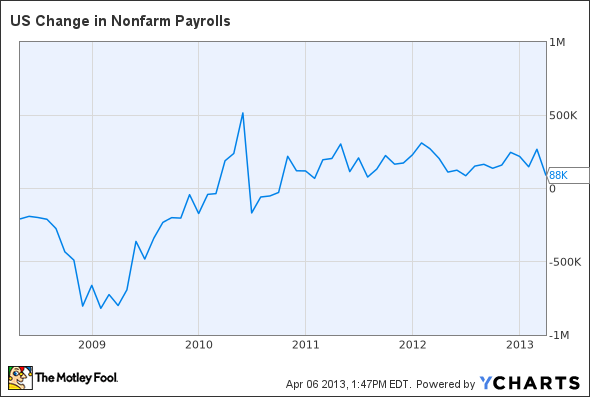 The worrisome part of the report was that the largest drop was from the retail sector, which shed 24,000 jobs. This shift perhaps indicates that consumers are beginning to feel the effects of the payroll tax increase and are spending less. We don't have long to wait for more reports on the retail situation as earnings season starts on Monday, with Alcoa the first to report.

Movers and shakers
The biggest mover this past week among the Dogs of the Dow was Hewlett-Packard, which fell 7.84%. HP's shares sank this week for two reasons. First, on Tuesday HP was down 5.2% after Goldman Sachs downgraded the company from "hold" to "sell," citing weakness in the PC industry that will pressure prices and margins.

Then on Thursday, the stock dropped 1.4% after the three embattled members of the board of directors announced they will relinquish their posts at the next board meeting in May. At last month's HP annual meeting, three board members found themselves on the hot seat after proxy firm Institutional Shareholder Services recommended that investors vote against them. The board members -- Chairman Ray Lane, audit committee head G. Kennedy Thompson, and finance and investments committee head John Hammergren -- were all in charge during HP's acquisition of Autonomy for $10 billion in 2011. HP wrote down that acquisition by $8.8 billion last year and accused Autonomy's former management of inflating sales. The board members squeaked by with narrow majority votes, with Lane getting 58%, Thompson getting 55%, and Hammergren getting 54%. Typically, any votes with less than a 70% majority are looked upon unfavorably. Although Lane will no longer be chairman, he will remain on the board, while the other two are leaving the board altogether.

Find Dan Dzombak on Twitter, @DanDzombak, or on his Facebook page, DanDzombak. He has no position in any stocks mentioned. The Motley Fool recommends Intel, Johnson & Johnson, and McDonald's and owns shares of General Electric, Intel, Johnson & Johnson, and McDonald's. We Fools don't all hold the same opinions, but we all believe that considering a diverse range of insights makes us better investors. The Motley Fool has a disclosure policy.