Hewlett-Packard was downgraded to "sell" by Goldman Sachs on Tuesday. However, the company has seen improving fundamentals in its printing business, arguably HP's most important franchise.

On Tuesday morning, Goldman Sachs analyst Bill Shope downgraded Hewlett-Packard (HPQ -0.39%) from hold to sell, with a price target of $16, based on a $3.26 EPS estimate for FY 2013. Shope primarily harped upon weakness in the PC industry, which may depress not only unit shipments, but also prices and margins. That said, he believes that HP's other major divisions could face trouble as well, calling out enterprise hardware, services, and printing. Combined, these factors could mean that earnings will continue to decline for HP even after 2013.

However, Mr. Market already recognizes the challenges faced by HP in the various businesses Shope mentioned in his report. That's why HP shares still trade for less than seven times Shope's very conservative EPS target, despite having doubled since late November. 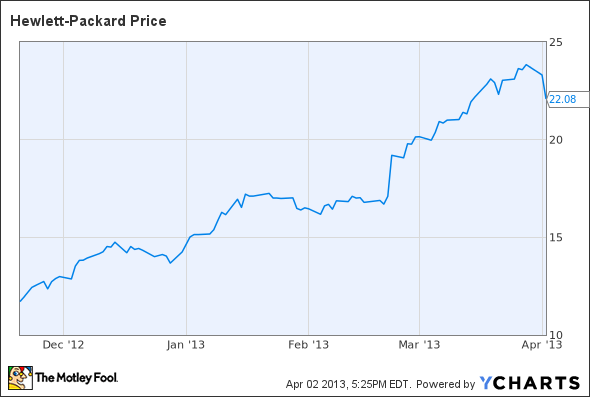 Unlike Shope, I am confident that CEO Meg Whitman will turn around HP's performance over the next few years. Indeed, the business has started to show signs of improvement. While PCs will remain an area of weakness, the PC business now represents less than 10% of HP's profit (whereas it still generates 25%-30% of rival Dell's profit). The printing business is already seeing improved profitability, and while the enterprise hardware and services businesses remain works in progress, they are likely to bottom this year.

Printing margins are growing
HP is the dominant player in printing globally, and will remain so for the foreseeable future. However, the printing business has stagnated in the past few years, as the growth of mobile devices has led people to print fewer documents and photos. Furthermore, the "razor and razor blades" printer pricing model has broken down, as savvy consumers have turned to generic ink to save money. This has crimped margins, as many printers are sold at a loss in the hope of generating a steady stream of profitable ink sales in the future. Lastly, the strong yen has raised the cost of printer components sourced from Japan, particularly the print engines for HP LaserJets, which are built by Canon.

Most of these headwinds have dissipated in recent quarters, which Shope seems to have discounted. The yen has declined by roughly 20% against the dollar since October, which (as I have argued on numerous occasions) will provide a significant tailwind to printing margins this year as component prices drop. Others have finally begun to take notice of this trend: Morgan Stanley analyst Katy Huberty cited better printing margins as one major reason for her recent upgrade of HP.

Furthermore, HP is taking a variety of actions to bolster sales and profitability in the printer business. The "Ink Advantage" program is lowering ink prices in developing countries while boosting printer hardware prices. HP's management has reported very good results from this initiative so far. In developed markets, an "Ink in the Office" campaign is moving many small businesses from laser to ink technology, which is cheaper for customers but more profitable for HP. Moreover, the company refreshed its multifunction printer lineup last fall for the first time in seven years. This is expected to result in sales gains throughout 2013 in that category. Lastly, HP is reducing printer SKUs by 30% by the end of next year, which will increase efficiency and boost profitability.

Think long-term
HP's most recent quarterly results showed plenty of weak spots, but also some pockets of strength. The overall result was that HP blew by its own guidance and the analyst consensus by roughly 15%. Despite this strong showing, the Goldman Sachs analysts apparently expect HP to miss its own guidance and the Wall Street consensus for the full year by around 8%. As an HP shareholder, I'm not too worried about that possibility. There's still a lot of work to be done, but Meg Whitman and her team have laid a foundation for long-term success.

Fool contributor Adam Levine-Weinberg owns shares of Hewlett-Packard. The Motley Fool recommends Goldman Sachs. We Fools may not all hold the same opinions, but we all believe that considering a diverse range of insights makes us better investors. The Motley Fool has a disclosure policy.