While the jobs report was terrible and the Dow is down big, these two stocks are up today.

The key report here is the jobs figures, particularly nonfarm payrolls. A drop in the unemployment rate is not necessarily a good sign, as it stemmed from people leaving the workforce. In March the labor force declined by 496,000, bringing the participation rate in the economy down 0.2 percentage points to 63.3% of the population.

On Wednesday ADP released its private-sector jobs report, which showed an addition of just 158,000 jobs in March, down from 237,000 in February. While ADP's report does not always line up with the government's, investors were concerned that the result fell short of expectations.

Today the government released its own jobs report, which includes both public and private-sector jobs. The report showed that the U.S. added just 88,000 jobs in March, down from 268,000 in February. That is far worse than analyst expectations of 190,000 additional jobs. 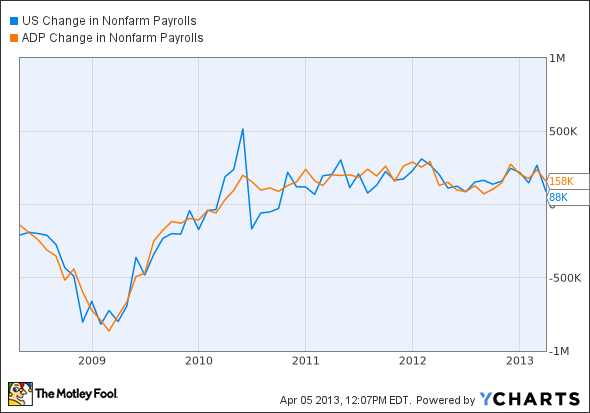 While some are blaming this on the sequester, the results were actually weak across the economy. In the private sector, the biggest decline was in retail jobs, which fell by 24,000. This is worrisome, as retail has been one of the strengths of the economy and the jobs market, adding an average of 32,000 jobs per month over the last six months. One theory is that consumers are beginning to feel the effects of higher payroll taxes and gasoline prices. We'll have to wait for retail sales reports to see whether that's the case.

In the government, the biggest decliner was the U.S. Postal Service, where employment fell by 12,000 in March. Motley Fool senior analyst Jim Royal took an in-depth look at how the Postal Service is being gutted. It's a fascinating read.

Today's Dow leaders
Today's Dow leader is Boeing (BA -3.66%), up 0.5%. Boeing has been in the news a lot over the past three months since the FAA grounded its 787 Dreamliner. As I've said, the Dreamliner problems are embarrassing for Boeing in the short run but will be a minor blip in the 30- to 50-year future of the aircraft. After all, Boeing continued to get orders for 787s throughout this ordeal. In the first quarter the company received orders for 42 Dreamliners. Besides the 787, the company received 156 orders for 737 regional airliners, three orders for 747s, and 19 orders for the 777 airliner.

Second for the Dow today is Caterpillar (CAT -1.44%), up 0.1%. Caterpillar is a cyclical company whose results are largely dependent on the health of the economy. As such, it's a bit of a surprise to see the stock up today. Caterpillar announced earlier this week that it will cut 300 jobs at a plant in Milwaukee and will enter into negotiations with the United Steelworkers union next week. Caterpillar has seen weak sales the past few months, and the stock has gone nowhere. Perhaps because the stock missed out on the Dow's rise, it's also missing out on its fall.

Dan Dzombak can be found on Twitter @DanDzombak or on his Facebook page, DanDzombak. He has no position in any stocks mentioned. The Motley Fool recommends Home Depot. We Fools may not all hold the same opinions, but we all believe that considering a diverse range of insights makes us better investors. The Motley Fool has a disclosure policy.