Heavy-equipment maker Caterpillar (CAT 0.73%) was one of only two stocks in the Dow Jones Industrial Average to not record any gains in the first quarter. With a need to align its production to global demand, it will be cutting as many as 300 jobs at one South Milwaukee factory, or 40% of its workforce that builds its mining equipment there.

That the company also begins contract negotiations next week with the United Steelworkers union that represents the workers there was lost on no one, yet the equipment maker says it's not a negotiating tactic.

Earlier this year its fourth-quarter profits were more than cut in half, falling to $697 million from $1.5 billion, as revenues tumbled almost 7%. More damaging, though, was having to write off $580 million in goodwill related to an acquisition it made in China that went awry amid an accounting scandal. Last month it reported global retail machine sales fell 13% during a three-month period ended in February as sales in the Asia-Pacific region plummeted 26%. With fourth-quarter construction revenues down 32%, and off an average 23% everywhere else in the world, Caterpillar really has few choices but to cut jobs. 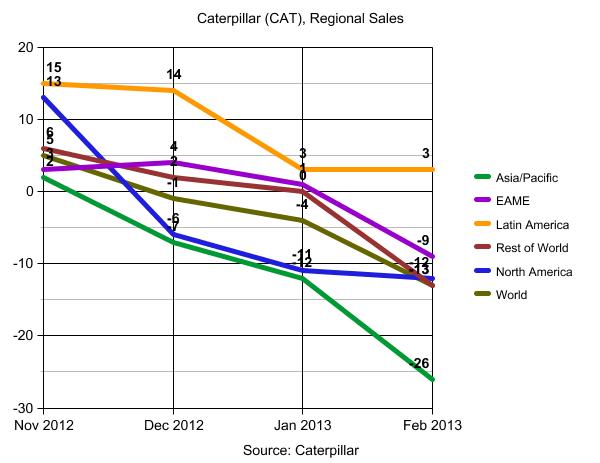 Other construction equipment makers like Deere (DE 0.50%) and Joy Global (JOY) have also pulled back sharply from their recent highs, with the former falling 11% and the latter down 24%. In fact, Joy Global announced its own restructuring at the end of last year that included layoffs and facility consolidation that it said would require it to take a $25 million charge this year.

With the Institute for Supply Management's manufacturing index offering up a weak outlook for the future and China's own economy facing a slowdown, coal demand has been slack and miners are seeing their shares sell off. The need for mining equipment is falling as result.

Caterpillar's stock is down 21% from its 52-week high and it trades at nine times estimates and less than its projected growth rate. It seems to me Caterpillar may prove to be a good turnaround play at this price.