Please ensure Javascript is enabled for purposes of website accessibility
Log In Help Join The Motley Fool
Free Article Join Over 1 Million Premium Members And Get More In-Depth Stock Guidance and Research
By Brian Stoffel - Apr 13, 2013 at 10:30AM

Last year may have been one of the worst ones ever for big-box retailers. Shares of Best Buy (BBY -1.84%), RadioShack, and hhgregg fell 50%, 78%, and 50%, respectively. It would make sense that this might be the case, as more and more people use these companies' stores simply as a venue to test out new products, before going home to order them cheaper on Amazon.com (AMZN -1.98%).

Things were bad enough that in early January, I told investors to stay away from Best Buy, even though it had experienced a slight rally. So far, I've been wrong. The stock has more than doubled so far this year. But let me explain why I still think you should stay away from the company's shares.

Anatomy of a rally, in three phases 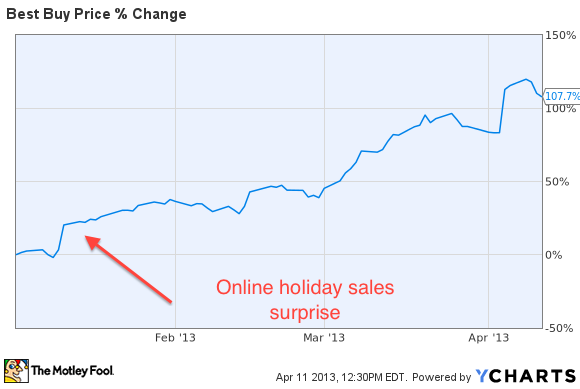 The first big bump Best Buy got was at the beginning of the year. Holiday sales, especially through the company's e-commerce site, were much better than expected. The site, in fact, was the third most visited, coming in behind only Amazon and Wal-Mart. 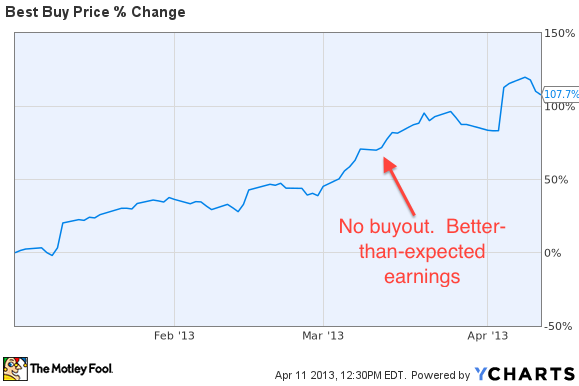 After a relatively flat February, the good news continued in March. First, founder Richard Schulze decided to forgo a buyout offer -- something investors actually liked. That was accompanied by an earnings release that showed positive comparable-store sales in the United States. And even though earnings were down from the year before, they were better than expected. 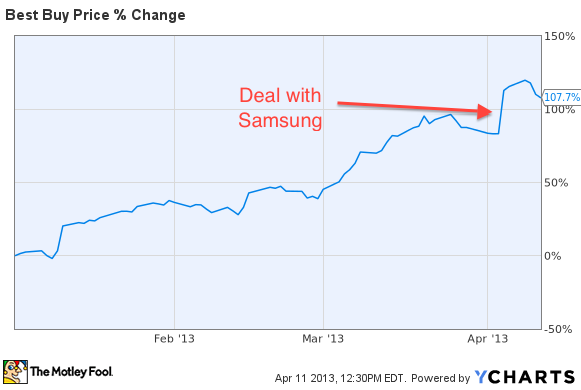 Finally, the company looked to pull a major coup when Samsung announced that it will open as many as 1,400 "Samsung Experience Shops" within existing Best Buy locations. The move makes a lot of sense for both companies. Samsung is able to gain a retail presence without having to build out its own stores, and Best Buy can capitalize on the popularity of Samsung's phones by attracting more customers.

But what do things really look like over the long term?
Let's be clear: Best Buy has made a lot of good moves lately. Not only were the company's e-commerce success and its deal with Samsung encouraging, but it also wowed analysts with the success of its price-match policy.

Still, one needs to take a realistic look at where commerce is heading and where Best Buy stands in the competitive field.

A distribution disadvantage
Let's take Best Buy's e-commerce success, for instance: It's great to see that the company's site was frequently visited during the holiday season. But even if Amazon, its main competition for e-commerce, is forced to collect sales taxes -- thereby lessening its competitive pricing -- Best Buy is still at a huge disadvantage.

Sure, there are Best Buy locations throughout North America. But those are stores, and not warehouses or fulfillment centers. Stores alone could never meet the demands of distributing products that Best Buy customers buy online. It would cost billions to build out an infrastructure of fulfillment centers that could match Amazon's -- and I just don't see the company making that investment.

Are Samsung stores a sustainable competitive advantage?
As I said, the Samsung move was a good one -- but will it really make a big difference? Samsung is trying to find an answer to the popularity of Apple's (AAPL -1.07%) wildly successful retail stores. But it's hard to see a store-within-a-store concept being anywhere near as unique and attractive as Apple's stores -- with a showroom full of products and a Genius Bar to boot.

And then there's the question of Samsung's long-term competitive positioning. As Foolish colleague Morgan Housel recently pointed out, companies in Apple and Samsung's field have a tough business model. There are almost no sustainable competitive advantages. You have to continue to churn out revolutionary products year after year after year.

It's easy to see how, even though both Apple and Samsung have been very successful lately, one disappointing year could give competition the edge it needs to usurp these leaders.

Get a second Foolish opinion
As it stands today, Best Buy hasn't been profitable over the past 12 months, and revenue is down compared with the previous year. Currently, Best Buy trades for 12 times free cash flow. While that's not necessarily expensive, there's still some decent growth priced into the stock -- growth I just don't see happening.