Please ensure Javascript is enabled for purposes of website accessibility
Log In Help Join The Motley Fool
Free Article Join Over 1 Million Premium Members And Get More In-Depth Stock Guidance and Research
By Matthew DiLallo - Apr 19, 2013 at 8:37AM

Gas prices are starting to come down and are the lowest they've been since 2011. How low can prices go?

I have some good news for you. That pain you've been feeling at the pump these past few years isn't likely to be as severe this summer. Gas prices appear to be headed lower for once.

According to the Energy Information Agency, or EIA, gasoline prices are projected to be an average of $3.63 this summer, the lowest since 2011. Unfortunately, that's nowhere near the $2.76 we were paying on average in 2010, but it's still a two-year decline. With our economy still just above stall speed we need every break we can get.

Some of you might be thinking that $3.63 is way to high to be paying for gas. You're probably one of the lucky ones that lives in a state with cheap gas prices. Don't worry, you should enjoy the same savings as the rest of the nation.

It is interesting to think about how prolonged pricing impacts the perception of what's considered a cheap price. We're pretty easily conditioned to accept higher gas prices, even if we do so begrudgingly. We're even overjoyed when prices dip back to a point where we once complained about them being too expensive.

I remember back when I first started driving and the price of gas was $0.69 a gallon. I'm only 33, so that's not ancient history. With gas locally up around $3.70 a gallon, my perception is that anything less than that price is a bargain. I know I shouldn't complain; I've cut my gas consumption by 75% in the past year as I'm now driving a lot less than before. Still, there's something appealing about dropping gas prices which makes me wonder, how much further prices could drop?

One of the driving forces in pricing is demand. On average, Americans as a whole are like me and simply are not driving as much as they had in the past. This has created quite the structural shift in the gasoline market, to the point where a lot of the gas refined in this country is disappearing beyond our borders. The other structural shift is that we've actually become much more fuel efficient.

What's interesting is that part of the EIA's forecast actually includes a rise in travel this summer. However, overall consumption is projected to be down 0.2% as fuel efficiency is offsetting that increased travel. You have to hand it to the auto industry: Its building cars that are not only fuel efficient; they are also in demand.

Ford (F -2.72%) recently reported its best hybrid sales quarter ever. Both its Fusion and C-MAX hybrids are attracting new customers to the brand who bought more than 21,000 of Ford's hybrids last quarter. Meanwhile, Toyota (TM 1.78%) recently reported that it has now sold over 5 million hybrids since 1997. Both companies are enjoying the financial success of selling more fuel-efficient cars to help alleviate our pain at the pump.

Still, fuel efficiency is just part of the story. Since the price of crude constitutes about two-thirds of the price of gasoline, a lower expected price per barrel should help. If you've been following any of the commodity news of late, you'll note that the international crude oil benchmark, Brent, has dipped below $100 per barrel. Further, domestically produced crude is priced even lower and is closing in on just $85 per barrel. As you can see below, oil prices play a major role in the makeup of the price of gasoline: 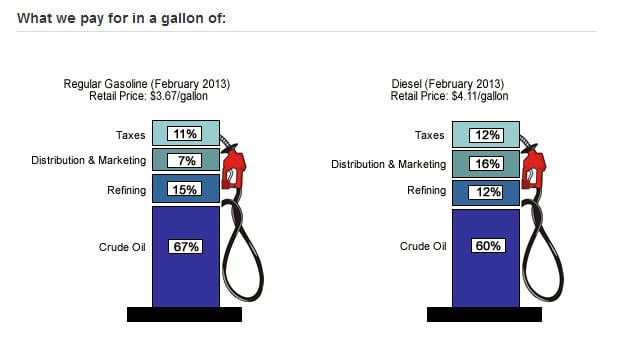 Falling oil prices help cut the price of gas, but oil prices can only fall so far before the drop impacts supply. Say what you want about oil companies, but oil is expensive to extract, and without the industry investing billions, gas would be a whole lot higher.

While producers thrive on high oil prices, some require it in order to remain profitable. For example, a small Bakken driller like Kodiak Oil and Gas (NYSE: KOG) needs oil to stay over $70 per barrel. That could mean that Kodiak and its smaller peers will need to pull back on production. Many other smaller oil drillers focus on areas with high natural gas content. A huge drop in the price of oil could impact the plans of Mississippi Lime driller SandRidge Energy (NYSE: SD). The company's financials are tight, and its cash flow is really tied to oil, meaning that it might need to pull back on drilling if the price of oil falls any further.

This could dampen any long-term drop in the price of gas. The other area which might keep gas prices elevated is in refining costs, which could be affected by new regulations. A new EPA proposal to lower the sulfur content in gasoline could cost the refining industry $10 billion in upfront costs and another $2.4 billion in annual expenses. While the EPA says this would just raise the cost of gas by a penny, the industry believes this proposal could increase the price of gas between $0.09 and $0.25. Refiners like Phillips 66 (PSX -0.60%) will likely be able to pass most of these costs on to consumers. The company has been aggressively securing cheaper domestically produced oil to boost its profit margins, and it wants to keep those margins high. Phillips 66 and its peers will also look to export more gas if that's what it takes.

What all this means is that while gasoline might be cheaper this summer, we face an uphill battle getting back to the glory days of really cheap gas. One of the problems with our newfound fuel efficiency is that we're not generating enough in gas taxes to keep up with the funding required to maintain our aging infrastructure. While that has some states looking at an annual fee for owners of hybrid vehicles, most are looking at raising gas taxes in order to fund the massive infrastructure fixes our nation's roadways need.

Enjoy the relatively cheap gas this summer. While I'm with you in rooting for gas prices to keep falling, we do face plenty of headwinds which likely will keep the price from dropping too far.