The market is up just a bit today, but that hasn't prevented Wells Fargo (NYSE:WFC) from delivering modest returns halfway through the trading day. The San Francisco bank is up 1.3% as it released newsthat it has helped nearly 93,000 customers as part of the National Mortgage Settlement, fulfilling almost 90% of its obligation.

Other banks buoyed as well

Three of the other Big Four banks are also in positive territory, with only Bank of America currently trading in the red early this afternoon:

Wells Fargo helping customers
The news of the National Mortgage Settlement is not the only example of the bank working with customers to avoid foreclosure. It was quick to point out that it has been helping customers avoid foreclosure long before the National Mortgage Settlement was reached in March 2012. Since early 2009, the bank has refinanced approximately 5.1 million mortgage loans, helping approximately 800 families per day.

This would seem to run counter to the claims of New York Attorney General Eric Schneiderman, who believes that the bank has failed to meet the required obligation, though he is primarily concerned with the bank's customers in New York. Nevertheless, Wells Fargo is poised to exceed its commitments under the settlement once all pending activity has been completed.

Wells Fargo helping investors
Helping customers has also boosted the bank's performance among investors, with the bank slightly beating the S&P 500 (SNPINDEX:^GSPC) so far this year. 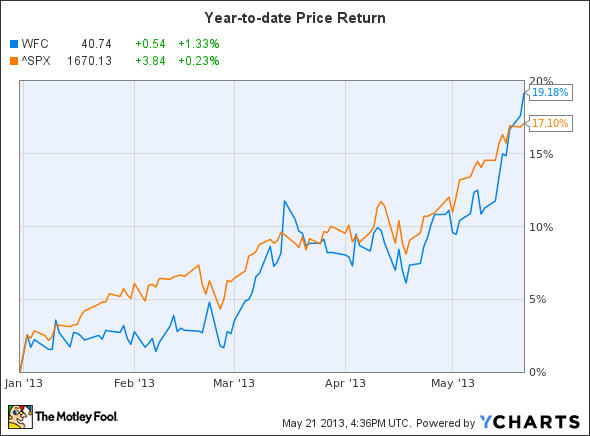 Investors should keep an eye on the news later this week, with data coming on both new and existing home sales before the end of the week. As the nation's largest mortgage lender -- including $109 billion in mortgages during the first quarter alone -- Wells Fargo remains in the driver's seat should housing sales remain high. The people buying these homes will need to get their mortgages from somewhere, and it is good bet that a lot will be from Wells Fargo.