The first five months of 2013 has been a trek steadily higher for U.S. markets, but June has brought some unease to investors. There's concern that the Federal Reserve will end a bond-buying program later this year, and a plunging market in Japan had the eye of traders this week. So as summer gets into full swing, we've seen a slight pullback, and this week, the Dow Jones Industrial Average (DJINDICES:^DJI) was down 1.17%, while the S&P 500 (SNPINDEX:^GSPC) fell 1.01%. 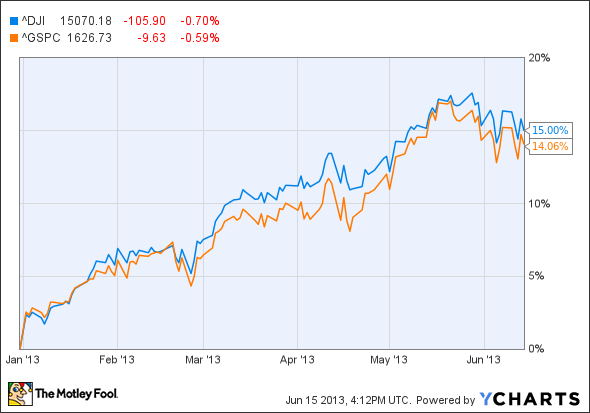 The good news is that the economy continues to grow slowly despite cuts to government spending and higher taxes. Long-term investors who ride out the day-to-day mood swings on Wall Street are still primed to do well if the economy grows.

Pfizer (NYSE:PFE) was the biggest winner on the Dow this week, gaining 2.9%. The company won a $2.15 billion settlement with Teva Pharmaceuticals and Sun Pharmaceuticals after they infringed on the company's patents when they sold generic drugs. This is a nice infusion for the company, but long-term, there are still a lot of challenges facing the drug industry. Blockbuster drugs are few and far between, and there's a lot of cost pressure in the medical industry, which resulted in a 9% decline in revenues in the first quarter.

UnitedHealth Group gained 2.4% on the week as investors fled to defensive stocks. Obamacare takes full effect next year, and while that means uncertainty for insurers, it also means more new customers. This should lead to higher revenue industrywide, and with the markets looking for steady stocks this week, UnitedHealth was a favorite.

Verizon (NYSE:VZ) rounds out the top three after gaining 1.7% this week. Yesterday, President Obama ordered government agencies to examine their use of wireless spectrum and hopes to free up some spectrum for private companies. Verizon Wireless is spectrum-hungry, and more available spectrum could be used to expand its network. It also doesn't hurt that Verizon has an incredibly steady business and a 4.1% dividend yield, the perfect stock for investors getting uneasy about the market.