Homebuilders are more confident than not for the first time since 2006, according to June's National Association of Home Builders (NAHB)/Wells Fargo Housing Market Index report released today.

After clocking in at 44 points for May, June's numbers tipped the sentiment scales in a positive direction to hit 52, blowing away analysts' expectations of a one-point rise to 45. Any number over 50 indicates that more builders view sales conditions as good than poor and this is the first time since April 2006 that the index  measuring builder confidence in the market for newly-built single-family homes has been above 50. 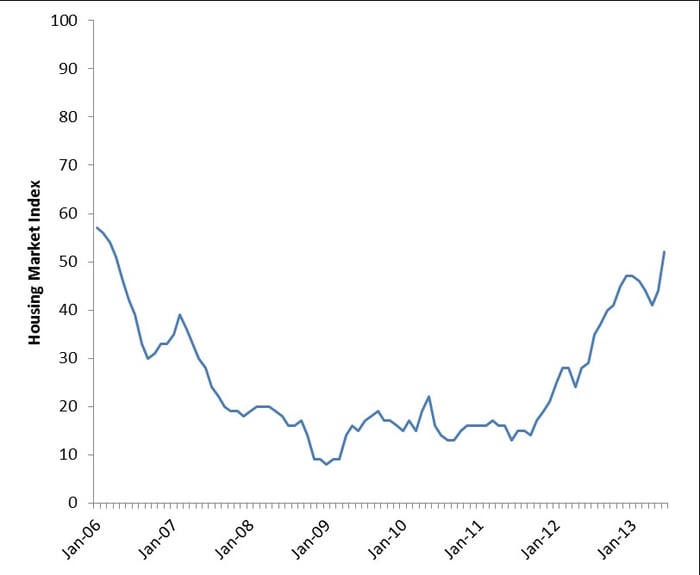 "Surpassing this important benchmark reflects the fact that builders are seeing better market conditions as demand for new homes increases," said NAHB Chairman Rick Judson in a statement. "With the low inventory of existing homes, an increasing number of buyers are gravitating toward new homes."

Housing markets have been steadily rising over the past few years, and this newest report puts positive sentiment behind positive sales. All three of the index's components pushed higher in June. Current sales conditions increased eight points to 56, expected future sales rose nine points to 61, and prospective buyer traffic squeaked out a respectable seven-point gain to 40 .

"Builders are experiencing some relief in the headwinds that are holding back a more robust recovery," said NAHB Chief Economist David Crowe. "Today's report is consistent with our forecast for a 29% increase in total housing starts this year, which would mark the first time since 2007 that starts have topped the 1 million mark."