It seems that every other day there's a new master limited partnership hitting the market. In fact, the energy MLP space has gotten to be downright cluttered. In this three-article series, I'm taking a closer look at the Alerian MLP Index ETF (NYSEMKT:AMLP), a tool that gives investors the opportunity to simplify MLP investing. I've already covered the natural gas transportation component, so today we're looking at the gathering and processing MLPs that make up the fund.

Oil!
The Alerian MLP Index ETF is up nearly 12% year to date, driven by the performance of the 25 MLPs that make up the index. At the end of the second quarter, approximately 41.6% of the index was composed of energy players whose main revenue driver comes from transporting oil and other petroleum products. 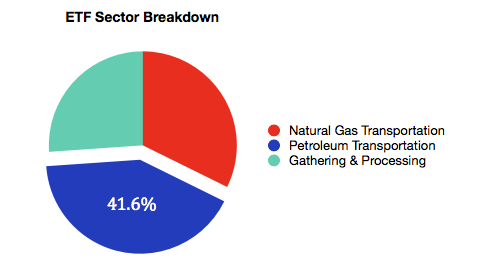 Investors have renewed interest in petroleum pipeline MLPs because of the protection they offer from inflation, and, to a greater extent relative to other MLPs like gatherers and processors, commodity risk. The Federal Energy Regulatory Commission adjusts the otherwise-fixed tariff rates for pipelines every summer to account for inflation, to the relief of investors worried about value erosion.

Here is a breakdown of the eight petroleum transportation partnerships and their respective weight in the fund as of July 30 (holdings can vary day to day):

Magellan Midstream is top on this list by weight, and third among all of the MLPs in the index. The partnership has a 9,600-mile pipeline network, which includes 49 storage terminals. Despite a strong fee-based business, Magellan has significant exposure to commodity risk as well, though in the second quarter that exposure drove a net income gain of about 10%. Magellan is up more than 26% this year.

Plains All American recently made news because its general partner is going to become a publicly traded MLP as well. More than 3.5 million barrels per day of oil and natural gas liquids flow through some part of the Plains system every day. Over the past year, Plains has benefited tremendously from outperformance in its supply and logistics segment. In the second quarter of this year, that segment returned to its baseline performance, however, resulting in a year-over-year drop in net income. Plains still increased its distribution and is on track to have distribution coverage of 130% for the full year, meaning a return to baseline performance in one segment does not spoil the potential for long-term success.

Buckeye Partners is the modern-day iteration of one of the oldest pipeline companies in the world and, in fact, it is the oldest energy MLP trading today, with an IPO date of Dec. 16, 1986. It controls 6,000 miles of pipeline and about 100 petroleum products storage terminals across the U.S. and the Caribbean. International exposure is something that few MLPs offer investors right now. Its an important angle, and it drove growth at Buckeye Partners in the second quarter.

Enbridge Energy Partners has reported dismal earnings results for two straight quarters, but its 6.6% yield keeps investors hanging on. The problem at EEP right now is by and large declining volumes. The partnership's North Dakota pipeline system has had to compete with rail for the past two years, and it has very much been on the losing end of that contest. The recent collapse of the Brent/WTI spread resulted in an uptick in volume on the system, but whether that will make a big enough difference on the bottom line remains to be seen. EEP also maintains a natural gas business but has plans to spin those operations off into a separate MLP called Midcoast Energy Partners.

Genesis Energy is another small player in the index worth noting. Shares have been on a tear this year, up more than 35% since January. It's a smaller MLP compared with the Magellans and the Plains of the world, focused primarily on petroleum logistics on the Gulf Coast. Operations include a growing marine transportation business, and the partnership has done well targeting the increasingly lucrative barge market. Investors should also note that Genesis remains committed to distribution increases, and just announced its 32nd consecutive quarterly increase.

Bottom line
The Alerian MLP Index ETF performs well, and generates income without the paperwork headaches that come with individual MLP ownership via the K-1 form. Diversity mitigates risk, and that's what you get with the 25 different MLPs in this ETF.