Everything went wrong for Enbridge Energy Partners this quarter.

Enbridge Energy Partners (EEP) reported earnings yesterday, and it wasn't pretty. The partnership missed analyst estimates badly, recording revenue of $1.67 billion and earnings of $0.13 per unit compared to expectations of $1.75 billion and $0.22 per unit, respectively. We always say that there is more to an earnings release than the top and bottom lines, and in Enbridge's case, it's a long list of things that did not go its way.

General rundown
Net income was roughly three-quarters of what the partnership posted in the year-ago quarter. Adjusted net income per unit, the aforementioned $0.13, was roughly half of what it was in the second quarter of 2012. 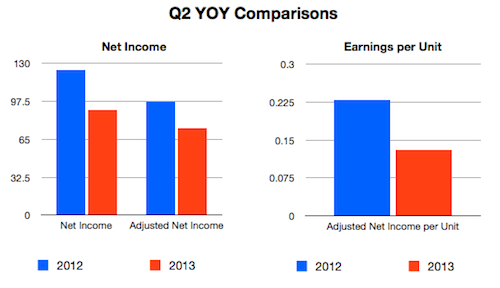 Certainly not what you want to see, though investors might have been expecting this, based on Enbridge Energy Partners' first-quarter results. Last quarter, the partnership suffered at the hands of low volumes on its liquids lines and low prices for natural gas liquids. This quarter, those trends continued and a few other things went wrong as well, including unplanned refinery maintenance, ethane rejection on the midcontinent natural gas systems, and a $13.1 million contribution to the preferred unit distributions due in 2015.

Segment breakdown
If there was any good news coming out of the company yesterday, it was from the liquids segment. Despite volume declines on all three systems, the segment posted a $12.4 million pop in operating income. The increase was driven by higher rates and higher tariff recoveries, though part of those gains were eviscerated by the leak at its Cushing terminal in May, the refinery outage, and competition from rail on the North Dakota system.

Management addressed the railroad situation in its analyst call later in the day. The view is that if foreign and domestic crude oil differentials remain as tight as they are, rail will become prohibitively expensive for Bakken shippers and volumes will revert back to Enbridge's North Dakota pipelines. And, in fact, that has started to happen and volumes are slowly trickling up in the third quarter. Management specifically claimed that single-digit differentials in crude prices discourage rail shipping, at the same time reaffirming that the partnership's new rail facility that just came online in Berthold, N.D., is on the take-or-pay contract system, meaning producers pay for their space whether or not they're actually shipping oil .

On the flip side of the coin, operating income for Enbridge Energy's natural gas segment was about one-third the amount it posted last year, coming in at $15.7 million. The big problems here were lower realized NGL prices and ethane rejection.

Ethane rejection refers to a producer's decision to keep ethane in the natural gas stream rather than separating it out to sell as an NGL. This is an increasingly common practice as shale gas production has flooded the market with ethane, depressing prices. In 2012, the country's ethane supply grew 54%, accompanying those volumes was a 63% drop in price. Through the first six months of 2013, ethane spot prices were down more than 45% compared to the same period last year. It is a trend that will endure forever, but will punish Enbridge as long as it lasts.

Bottom line
Clearly, this was a terrible quarter for Enbridge Energy Partners. Looking ahead, there are market fundamentals, like the price of ethane, that will continue to wreak havoc on near-term earnings. Management has emphasized the long-term organic growth story and a transition to a lower-risk business model, supported by parent company Enbridge (ENB -4.47%). While that outlook might be rosy, you cannot blame investors opting to stay on the sidelines for now.

Fool contributor Aimee Duffy has no position in any stocks mentioned, and neither does The Motley Fool. Try any of our Foolish newsletter services free for 30 days. We Fools may not all hold the same opinions, but we all believe that considering a diverse range of insights makes us better investors. The Motley Fool has a disclosure policy.