Please ensure Javascript is enabled for purposes of website accessibility
Log In Help Join The Motley Fool
Free Article Join Over 1 Million Premium Members And Get More In-Depth Stock Guidance and Research
By Matthew DiLallo - Updated May 2, 2018 at 3:23PM

Investors see another distribution cut coming down the pipeline.

Earlier this year, the U.S. Federal Energy Regulatory Commission (FERC) changed a long-standing policy that allowed master limited partnerships (MLPs) like Enbridge Energy Partners and TC Pipelines to collect an allowance for income taxes on certain pipelines. As a result, Enbridge Energy Partners revised its full-year guidance to reflect its expectation that this policy change will result in a $100 million reduction in revenue and a $60 million drop in distributable cash flow. 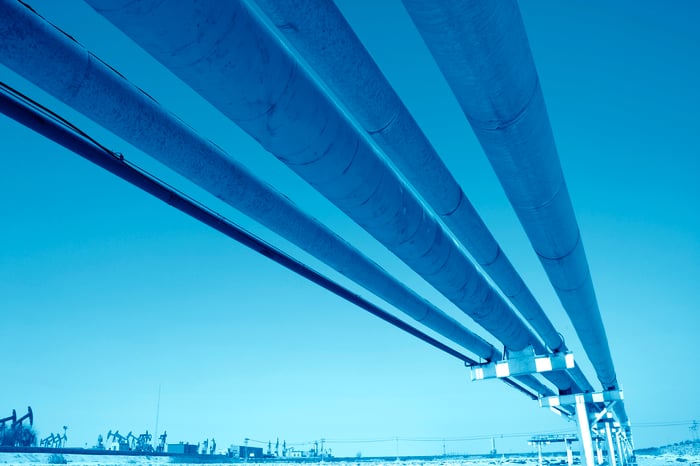 Because of that, the company only expects to generate enough cash to cover its distribution by a tight 1.0 times this year as opposed to the more comfortable 1.15 times it initially anticipated. That razor-thin margin for error has investors concerned that Enbridge Energy Partners might reduce its distribution again to give it more breathing room. Those fears have increased with today's news that TC Pipelines will cut its payout 35% due to the impact the FERC rule change will have on its cash flow.

With today's sell-off, units of Enbridge Energy Partners now yield nearly 14.8%, reflecting the market's view that the company's payout isn't sustainable. While the company did recently declare its first-quarter distribution at the same rate as the previous quarter, the market seems to think it will either eventually reduce the distribution or will be taken private by parent company Enbridge (ENB 1.50%). Investors should have a better idea of Enbridge's plans for its MLP when both companies report earnings on May 10.