TiVo (NASDAQ:TIVO) is all done re-enacting courtroom dramas like LA Law and Perry Mason. The future is a brand-new show, with the focus squarely on the viewer. That's a good thing.

Three months ago, TiVo shares were sniffing at multiyear highs thanks to a solid first-quarter report. The digital video recorder veteran also had a couple of patent lawsuits in fie fire, ready to send shares even higher on a moment's notice. 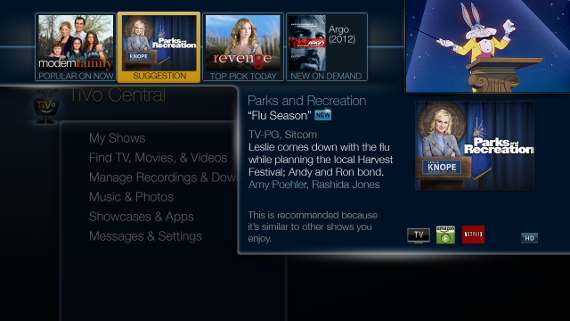 Management also took that opportunity to double its share repurchase allowance, which turned out to be a savvy move. You see, rather than spiking on the news, TiVo shares plunged more than 12% overnight. Allowing the company to buy back more shares turned out to be an opportunistic idea.

This week, TiVo issued its second-quarter report. It's the first business update since that fateful settlement of multiple lawsuits, and investors wore their nerves on their sleeves as the report approached.

TiVo beat both earnings and revenue estimates, even when you back out the one-time contributions from litigation settlements. Normalized earnings improved from a $0.23 loss per share last year to a smaller $0.11 loss this time, and CEO Tom Rogers said that GAAP and non-GAAP earnings should be positive from here on out. The long-term settlement payments will provide an essentially cost-free revenue base for years to come.

In addition, the company laid out the multiyear schedule for cash payments and license revenue from its spate of technology battles. The company has collected about $800 million so far and expects another $1.2 billion in settlement money by the end of 2019. Google and Cisco will provide the lion's share of future payments, while Arris and Time Warner Cable are off the hook. When Arris bought the old Motorola set-top operations from Google, the companies agreed to have Google shoulder whatever TiVo-based litigation costs might be involved.

So TiVo is now free to forget about court dates and focus on a new business model. The long-term idea is to make TiVo the go-to provider of software for organizing the growing deluge of digital content in the average living room. To that end, several of TiVo's cable company customers are rolling out TiVo-based software updates on set-top boxes both old and new. The company just received a technical Emmy award for its personalized video discovery platform, which bodes well for the future.

The big-ticket settlements will provide stability and fiscal freedom for the foreseeable future. That's a given. Investors and current shareholders (this writer included) should look for more technology deals with cable operators and consumer electronics experts, because that's where TiVo's rubber now hits the road.

Keep an eye on the "hardware revenue" line of the income statement, because that's a pretty good proxy for deals with cable operators nowadays. In the second quarter, this crucial metric more than doubled year over year. Numbers like that make me a happy TiVo investor.

Out of the Courtroom and Into the Living Room: TiVo's Brand-New Business Model @themotleyfool #stocks $TIVO $GOOGL $CSCO $ARRS Next Article
Current