Over the past 12 months, shares of First Niagara Financial (NASDAQ: FNFG) have handily outperformed the S&P 500, but only narrowly outperformed the KBW Bank Index, a composite of 24 bank stocks that serves as a benchmark for the bank industry. The total return of 31% puts the Buffalo, New York-based lender roughly 14 percentage points above the former index, but only one percentage point above the latter. Given this performance, can investors reasonably expect it to continue higher going forward? 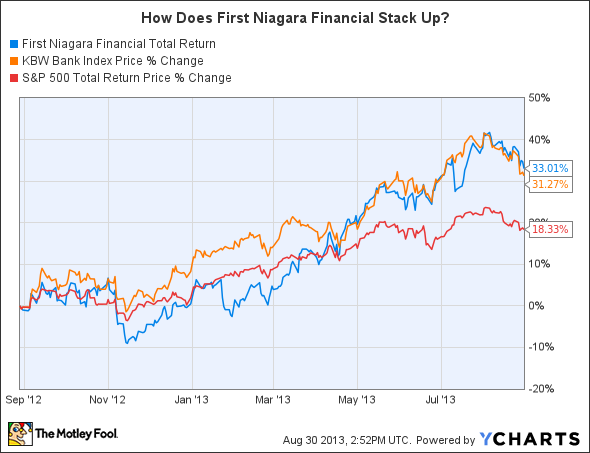 According to the collective insight of banking analysts, the answer to this question is yes. The median target price of the 11 analysts surveyed by Standard & Poor's Capital IQ is $11.50 a share, with a high estimate of $12 and a low of $10. As of the time of writing, First Niagara traded for $10.19 per share. Consequently, if the analysts are to be believed, which is admittedly a big "if," then there's an anticipated upside of 13%.

The projected upside in this case is largely the result of two factors. In the first case, First Niagara's stock is valued at roughly the industry average. Thanks to its history of prudent risk management, its shares trade for 1.85 times tangible book value and 0.82 times book value -- the wide difference between these two is a result of First Niagara's $2.5 billion in intangible assets.

And in the second case, there's optimism around First Niagara's growth prospects. Since the financial crisis, it has more than tripled its asset base, going from $9.3 billion in 2008 all the way up to $37.2 billion today. Whether it can continue to do so going forward, and whether its acquisitions play out as planned, of course, remain to be seen.

At the end of the day, this is a quick and rudimentary analysis that shouldn't be relied upon singularly when deciding whether to buy or sell shares of First Niagara Financial. What it shows us instead is that a deeper look at the bank's shares is in order given its recent history of growth and relatively pedestrian valuation of its shares.