Natural gas fuel has been on the horizon for years, and now is time for the rubber to hit the road.

Wasn't this supposed to be a prime time to transition from oil to natural gas in the transportation industry? Clean Energy Fuels (CLNE 3.13%) is building an infrastructure of fueling stations, while Westport Innovations (WPRT 10.83%) is developing technology for engine makers, and Cummins (CMI 1.73%) is investing big in building trucking engines to help switch over the trucking fleet.

But, so far, we haven't seen much of that momentum take place. Clean Energy Fuels' revenue was only up 17.6% year over year in the second quarter after pulling out the volumetric excise tax credit and, in the second quarter, was up just 3.8% in the first six months of the year.

At Westport Innovations, product revenue was down 5.2%, to $32.5 million last quarter, and overall revenue was down 29%. Net loss exploded from $6.1 million a year ago, to $33.9 million, as well, even when you include net income from its partnership with Cummins.

Speaking of Cummins, that was the one positive to point to last quarter, and may show some light at the end of the tunnel. Cummins Westport's revenue was up 38% over a year ago, to $78 million, and produced 2,716 units. The ISX12 G heavy-duty truck engine launched in April, and that could be a game changer if it's adopted on a wide scale.

Watch with a skeptical eye
There's a lot of promise in natural gas transportation, but the industry is still very high risk right now. Clean Energy Fuels, and Westport Innovations, are both reporting huge losses, and they're burning cash in the process. 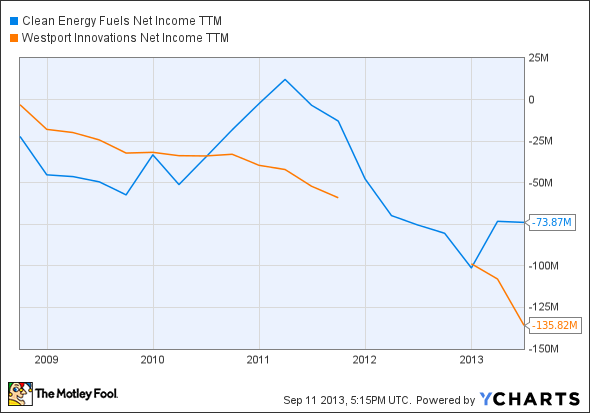 The result of that cash burn has been dilutive offerings to keep operations running. Clean Energy Fuels completed a convertible debt offering earlier this month that could add 16-million shares to those already outstanding. Westport has gone to the market offering shares three times since coming public, for a total of 18.7 million in shares.

Until either company reports a profit, or begins to grow more quickly, they're too rich for my blood. We've seen a lot of promising technologies come and go in the energy industry and, unless this one picks up soon, it will be nothing more than a money pit.