It's easy to talk about peak oil in a theoretical sense and ignore the real changes that are already happening. Not only is America producing more of its own oil, but overall energy consumption and oil consumption are falling. The lack of cost effective oil is a major global problem, but within the U.S. peak oil is less of a threat.

Falling consumption
America's population continues to grow while becoming more efficient. $100 oil has inspired consumers to make fuel economy one of the most important factors in new vehicle purchases. Also, government mandates have helped replace a significant portion of gasoline consumption with ethanol. 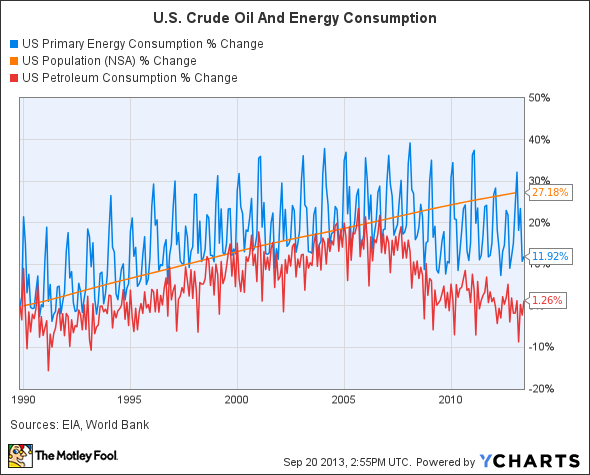 A number of drivers are leaving gasoline and diesel altogether for electric and natural gas powered vehicles. Clean Energy Fuels (NASDAQ:CLNE) has taken it upon itself to build out a network of natural gas refueling stations. The company is making the critical piece of infrastructure that will allow heavy truckers to switch their expensive diesel powered vehicles for cheaper natural gas vehicles. The firm is expanding its network, and it estimates that it already fuels 90% of all natural gas trucks.

The company's future is quite bright. Thanks to stronger sales it was able to post an adjusted EBITDA of $11.1 million in the second quarter of 2013. Its growth process will not be instantaneous, but over the next decade its sales should continue to grow and profits should start to roll in.

Rising production
Just as falling demand helps to decrease the impact of higher prices, rising production is helping to equalize the other side of the equation. New supplies are being brought online in North Dakota, Texas and elsewhere. Also, high prices make enhanced recovery techniques like carbon dioxide injection more attractive. 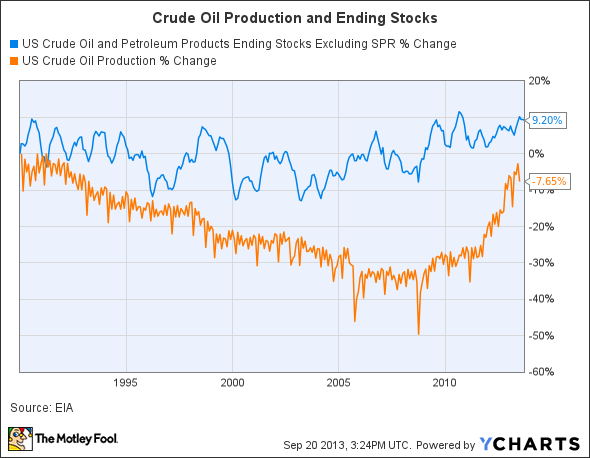 Kodiak Oil & Gas (NYSE: KOG) is a great representative of America's oil boom. The firm is a small E&P firm found in the Midwest's Bakken region. In 2013 it expects to produce 30 to 34 thousand barrels of oil equivalent per day, or mboed. Its production levels are quite impressive, given that it produced an average of 1.3 mboed in 2010 and 14.4 mboed in 2012. Its balance sheet needs to be watched, however, as it had $1.446 billion in long-term debt in the second quarter of 2013. If oil prices fall, then it may need to scale back its capex to make sure that its debt load does not increase any further.

One factor that will boost Kodiak's earnings in the near term and hurt HollyFrontier (NYSE:HFC) is the expansion of America's pipeline system. Everyone was taken by surprise when America's domestic production boomed. A lack of effective transportation infrastructure meant that producers like Kodiak received a low price for its oil relative to international prices, while refiners like HollyFrontier were able to make a pretty penny by refining cheap U.S. oil and selling it overseas.

Valuing HollyFrontier based on its past earnings makes it look deceptively cheap. It is trading around 5.3 times historical earnings, but taking into account falling margins and falling earnings it is trading at 9.5 times expected 2014 earnings, placing it much closer to industry averages.

Halliburton (NYSE:HAL) is one of the biggest beneficiaries of America's peak oil strategy. Increasing production through hydraulic fracturing has been a key tool for the nation, and Halliburton has a great deal of experience providing hydraulic fracturing services. From the beginning of 2012 to the second quarter of 2013 it reduced the average number of drilling days per horizontal well from 25.7 to 20.5. This helps to decrease costs for owners and boost overall returns.

Halliburton offers oil field services to field owners, and the large state oil company Pemex has already asked for Halliburton's help. With a reasonable debt load and a total debt to equity ratio of 0.31, Halliburton is well positioned to take America's technology overseas.

Foolish final thoughts
The idea of peak oil strikes fear in the hearts of many Americans, but the reality is that the U.S. is already preparing itself for a world with less affordable oil. Clean Energy Fuels is a good way to play the rise of alternative fuels. Kodiak and Halliburton are two companies taking advantage of the nation's growing production, but Halliburton's cleaner balance sheet makes it a safer option. HollyFrontier is one refiner stuck with the short end of the stick, as rising U.S. oil prices will put a big dent in its earnings.