When NVIDIA (NASDAQ:NVDA) unveiled its Tegra 2 design wins at the 2011 Consumer Electronics Show, investors went wild. NVIDIA announced that Tegra 2 would be featured in a slew of tablets as well as a number of smartphones. As a result, NVIDIA stock spiked to levels not seen since before the Great Recession. 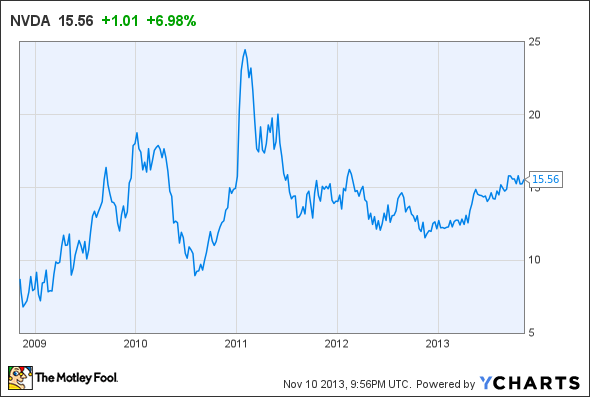 Since then, NVIDIA investors have received a sharp dose of reality. None of the Android tablets unveiled at CES 2011 could compete with Apple's iPad. Moreover, the smartphone market quickly turned into an Apple-Samsung duopoly, and both primarily use their own processors rather than work with third-party vendors like NVIDIA.

The end result is that Tegra has not been the massive growth driver that NVIDIA bulls expected. NVIDIA is on track to generate just over $4 billion of revenue this year, which is roughly equal to its revenue two years ago. However, the company may finally be ready to return to growth in 2014. All of its initiatives are starting to click at once.

In the Tegra business segment, NVIDIA got knocked off track in 2013 when the company was forced to choose between delivering the Tegra 4 processor on time or speeding up development of the upcoming Tegra 4i and "Logan" chips. NVIDIA chose to delay Tegra 4, even though that probably caused it to lose some design wins this year.

However, NVIDIA's 2013 pain should lead to gains in 2014. The company has two Tegra chips scheduled to arrive in the first half of next year. Tegra 4i will give NVIDIA its first realistic shot at competing with Qualcomm in the smartphone world, because it will include NVIDIA's first integrated modem. Meanwhile, the Logan chips (likely to come to market as Tegra 5) will be the first to include the new Kepler graphics architecture, and should be much more powerful than the Tegra 4.

While the other three growth drivers are likely to be less significant in 2014, they are still very important because they represent high-margin products. NVIDIA is already posting solid growth in its high-end gaming chips and its Tegra high-performance computing chips. Its recent price cuts for high-end GPUs should keep this growth on track.

NVIDIA's GRID cloud-based GPUs may be a relatively small growth driver next year as the product is brand new, but longer-term it could be more important than anything else the company is doing. Cloud computing is a rapidly growing field, and GRID is a unique product that allows heavy-duty graphics processing to be accomplished in the cloud. NVIDIA already has more than 200 ongoing customer trials for GRID, up from 150 just one quarter ago.

Back on track?
Given the number of setbacks that have undermined NVIDIA's growth in recent years, I think investors should take the company's plans with a grain of salt. Nevertheless, there are enough catalysts for NVIDIA in 2014 that the company should be able to return to solid growth even if one of its products is delayed or falls flat in the marketplace. Shareholders should sit back and enjoy the ride!