Please ensure Javascript is enabled for purposes of website accessibility
Log In Help Join The Motley Fool
Free Article Join Over 1 Million Premium Members And Get More In-Depth Stock Guidance and Research
By Patrick Morris - Dec 28, 2013 at 11:29AM

Ford and GM have benefited from surging car sales, but so too have Bank of America, Wells Fargo, and other banks.

It's no secret that the automotive market charged back in a big way in 2013 -- and while companies like Ford (F 3.06%) and GM have certainly been beneficiaries, a few banks are also reaping the rewards.

Consider that Ford recently released a statement entitled simply, "Ford Expects Outstanding 2013" that began by noting, "Ford expects 2013 to be one of the best full-year results in its history, with strong revenue growth, market share in all regions improved or equal to last year, total company pre-tax profit of about $8.5 billion." The release reiterated that 2013 would be one of its best years four times.

While things are not where they were before the financial crisis, the 14.5 million vehicles sold through the end of November would best the total sales of each year between 2008 and 2011. When you consider the average December over the previous 13 years had 1.3 million vehicles sold, it also means that 2013 will represent not only represent a great year for Ford, but the entire automotive industry: 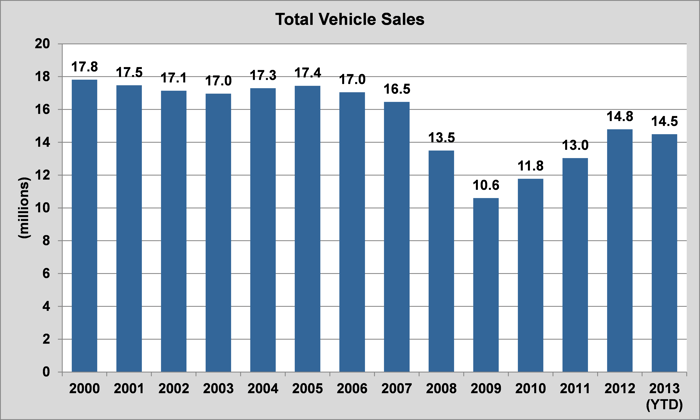 While the beneficiaries of this include the automotive companies, the reality is, almost all vehicles are financed through auto loans, and the rise in sales is also a big benefit to banks.

For example, Wells Fargo has watched its automobile loan portfolio grow by $3.6 billion from the third quarter of 2012 to the third quarter of this year (8%). While Wells Fargo saw impressive loan growth, even more impressive growth (on a percentage basis) was seen at Huntington Bancshares, where auto loans outstanding grew by an astounding 49% (or $2 billion) and PNC (up $1.9 billion, or 23%).

Yet perhaps the biggest winner in all of this may be Bank of America.

Experian, a data and consulting firm, recently reported that Bank of America has been aggressively taking market share over the last year: 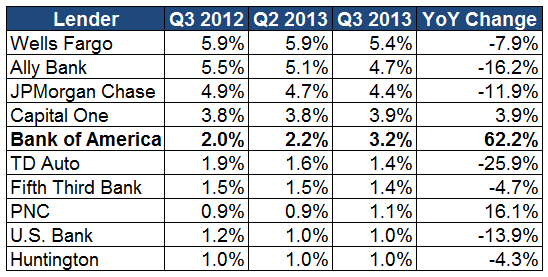 As you can see, Bank of America has been one of only three banks to add to its market share, and it has done so in a commanding way. This is important for shareholders and people considering an investment in Bank of America because it again shows the bank's ability to expand and broaden its consumer banking business, which has represented almost 40% of its nearly $11.8 billion of net income through its core businesses.

Many people think that Bank of America is simply a megabank that has exhausted its opportunities for growth, but this is just another in a long list of examples that show how much opportunity still exists for the company.