The plunging stock prices of contract drillers suggest that investors are worried about the industry. However, a key supplier doesn’t think things are as bad as investors fear.

The stock prices of contract drillers like Seadrill Ltd. (SDRL) and Transocean Ltd. (RIG 4.68%) are down by more than 10% over the past month. Investors are worried that a growing supply of un-contracted drilling rigs could really impact earnings at these companies. What's even more worrisome is the fact that these companies continue to have new drilling rigs built even as demand seems tepid at the moment.

What problem?
To investors, that's a big problem. However, it's not one that suppliers like National Oilwell Varco, (NOV 1.45%) are currently worried about. National Oilwell Varco COO Clay Williams brought this up on the company's earnings conference call last month. He noted that much has been written about falling demand, which isn't a surprise given the fact that there are 39 un-contracted floaters coming to market over the next few years. However, he went on to say that this "should point to a more restrained outlook for newbuild deepwater rig demand in 2014. The only problem is we just don't see it yet."

Further, he noted that "those who know most about the market continue to place orders." That suggests one of two things. Either these companies are blind to the oversupply issue and the whole industry will be burned when dayrates burst and head much lower. Or, on the other hand, demand really is just going through a temporary lull and contract wins should pick up in the future.

The real problem
Looking out into the future, the real problem won't be an oversupplied market, but rather the market looks vastly undersupplied given the current demand outlook. In a recent investor presentation by Seadrill, the company noted that the current newbuilds projected to come in service between now and 2016 just barely offsets possible retirements. The real issue as the following slide shows is that these newbuilds don't come anywhere near reducing the demand imbalance from additional rig requirements. 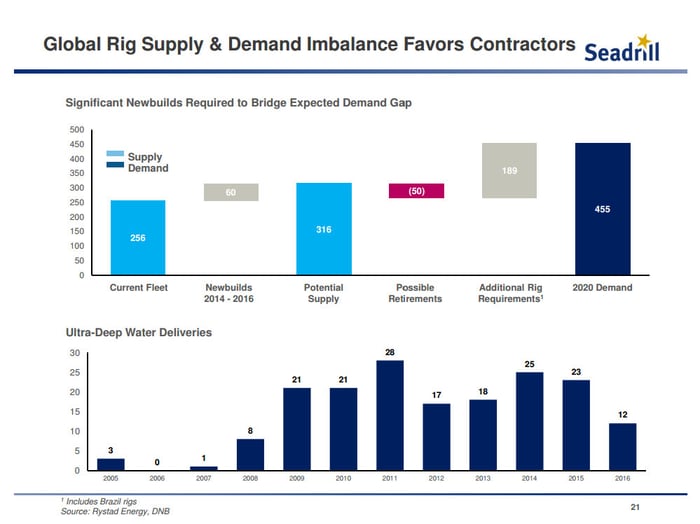 Investor takeaway
Contract drillers are likely to endure some more short-term pain as the industry works through the 39 un-contracted newbuilds coming online over the next few years. However, given the long-term outlook that suggests drilling rigs will be in short supply, it does make sense to keep building.

Further, this storm could be fairly short-lived as there are a number of recent discoveries that need to be developed, while at the same time the industry always needs to be looking for new sources of oil. Those sources will increasingly be discovered in deepwater and ultra-deepwater locations, which is where companies like Seadrill are focusing on building new rigs. Because of this, the deepwater drilling market just might not be as bad as investors fear.

Matt DiLallo has the following options: short April 2014 $38 puts on Seadrill. The Motley Fool recommends and owns shares of National Oilwell Varco and Seadrill. It also owns shares of Transocean. We Fools may not all hold the same opinions, but we all believe that considering a diverse range of insights makes us better investors. The Motley Fool has a disclosure policy.