Recent debates about jobs in the United States have focused on the relative importance of the minimum wage, the decline in labor participation rates and the rise of the part-time workforce, or the impact of Obamacare on business hiring and employee security. What we haven't heard much about -- at least not since President Obama's latest State of the Union address -- is the gender pay gap.

During his latest annual address, Obama trotted out the oft-repeated statistic that women "make $0.77 for every dollar a man earns" as part of his overall push for higher pay across the board. This statistic isn't quite true, but it does hit at a fundamental truth in the American labor market: Women on average earn less than men, and they have been earning less ever since they became a major part of the workforce during and after World War II. The Bureau of Labor Statistics recently reported that the median weekly wage for all full-time working women was $706 last year, while the median weekly wage for men was $860 -- that's $0.82 for women per dollar earned by men. A Pew Research report issued late last year pegged the rate at closer to $0.84 for women per dollar earned by men, but no matter which way you look at it, it's clear that men are earning more than women.

Over time, the pay gap has closed somewhat, as the BLS's data finds that women were earning only $0.62 per dollar earned by men in 1979, the first year the department began tracking the difference: 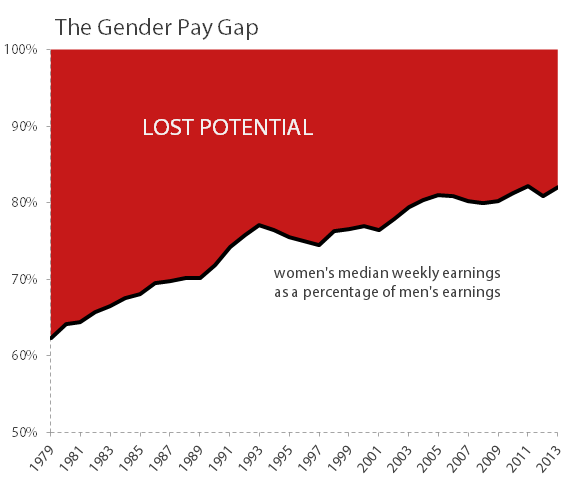 The gap is even narrower between younger men and women. Working women between the ages of 20 and 24 earned $0.89 per dollar earned by their male counterparts in 2012, and women between 25 and 34 earned $0.90 for every dollar earned by 25- to 34-year-old men. But nevertheless, the gap persists. Here's what it looks like in terms of real weekly earnings over the same time frame: 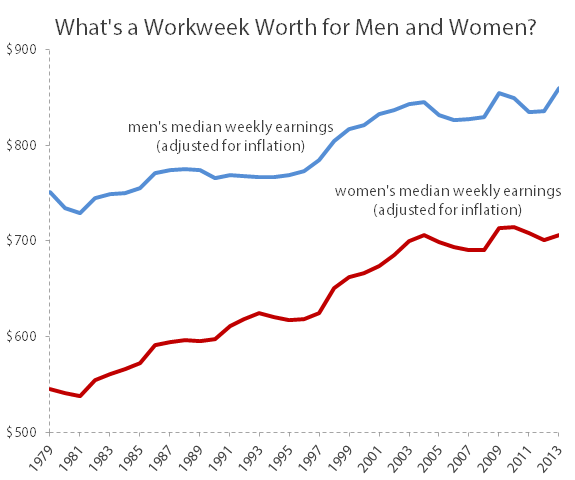 Every week last year, a woman making the female median wage might have missed out on $154 in her weekly paycheck when compared with her male counterpart. Over the entire year, that's $8,000 in potential earnings -- enough to buy a decent used car. Put another way, while women now make up nearly half (47%) of the workforce, they only earn about 42% of the country's wages, and this is down from a peak of 43% in 2009: 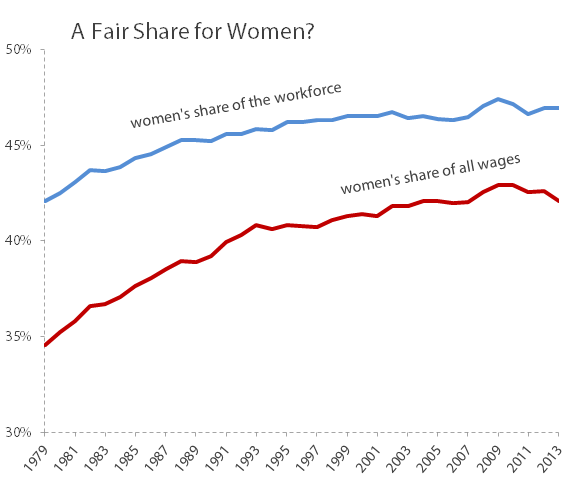 The most common explanation for this discrepancy is due to the jobs and career paths most women choose to take. Derek Thompson wrote last year on the "jobs gap," which shows a much higher percentage of men than women in many highly paid positions. Christina Sommers responded to Obama's State of the Union claim earlier this year by pointing out that many of the highest-earning college degrees are absolutely dominated by men, while women earn the vast majority of many of the lowest-earning college degrees. This can explain some, but not all, of the wage gap -- a fairly recent study by economists Francine Blau and Lawrence Kahn took these and other sociocultural factors into account, but still found that a woman working the same job as a man was likely to earn $0.91 per dollar earned by her male counterpart.

The wage gap has no single easy explanation, but it does exist and it does affect women every day of their working lives. But how much does it really affect women, and how much do women's reduced earnings affect the country? Using data available from the BLS and other government agencies, I've assessed the wage gap's national impact, not on an individual basis, but across the tens of millions of women in the workforce over the past three-plus decades. The difference between what women have earned and what they could have earned if they earned the same wages as men is huge, adding up to hundreds of billions of dollars every year: 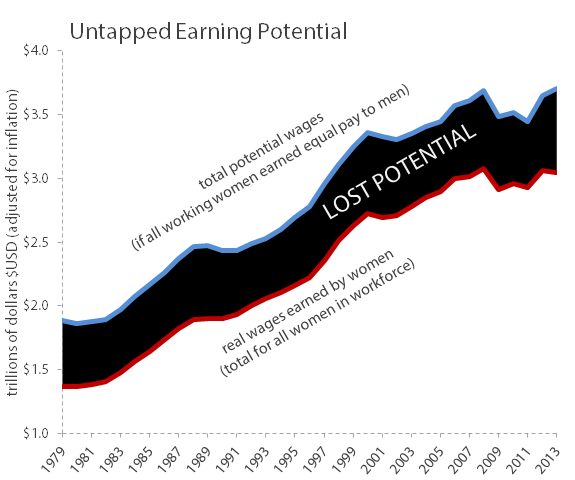 To calculate this gap, I annualized the weekly earnings for both men and women and then estimated what earnings would be across the entire workforce by multiplying each gender's annual median wage by its total reported employment at the end of each year. Women's share of this combined total helped me break down the larger and more accurate national wage and salary figures reported by the Bureau of Economic Analysis as part of its GDP figures. It's not perfect, but it should be a reasonably accurate assessment of women's earnings for the entire country.

Last year, the American workforce combined to earn $7.2 trillion, and women took home roughly $3 trillion of that total. If women earned only 90% as much as men, they would have made about $300 billion more. If women's wages were equal to men's, the female workforce would have earned roughly $3.7 trillion in total wages. That's a huge difference, worth more than $650 billion (these numbers don't all match because of rounding). That's roughly enough money to zero out the national deficit, to buy everyone in the country three unlocked iPhones, or to build six brand-new space stations. It's a lot of money, and over the past three decades, the potential real wages lost each year in the gender pay gap have often been nearly as great. All told, this lost potential adds up to a cumulative $17.4 trillion in real wages since 1983: 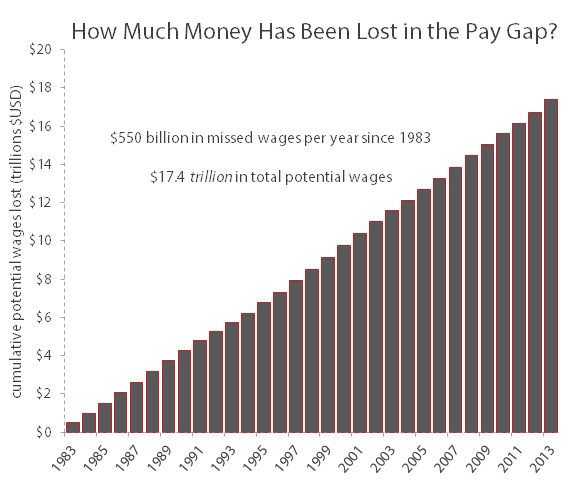 This isn't chump change. Closing the gender pay gap today would be worth about 4% of GDP, and this doesn't take into account the multiplier effect of new wages, which means that each potential extra dollar earned by women might have had several dollars of total impact on the economy.

The solution to this gap won't be easily found or quickly implemented, but women in the United States can at least take heart that the gap is narrower than it appears at first glance, particularly at younger ages.

There's more than one way to close the gap, and there's no reason not to try. What would your best solution be for this long-running problem? If you've got an idea, please share it in the comments below.