The minimum wage hasn't kept pace with many parts of the American economy. What would it look like if it had tracked the growth of those figures (inflation, GDP, average wages, and more) over time?

The minimum wage has been one of the hottest topics in politics this year, thanks to a concerted publicity effort from President Obama and other liberal leaders. The new minimum many of these leaders target is $10.10 an hour, which would push the real value of minimum-wage work close to all-time highs set almost half a century ago: 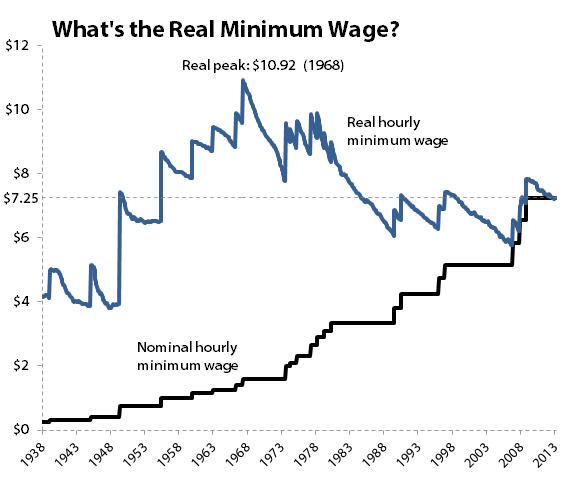 Many writers (myself included) have shown that the value of the minimum wage, beyond falling in real terms for decades, has also lost purchasing power against a broad basket of important expenses, and is weaker in relation to most other American workers than it has been for many years.

Raising the minimum wage to $10.10 by 2016 would do much to fix that weakness, but there are also widespread fears -- including some voiced by the Congressional Budget Office -- that raising the minimum wage would actually cost more American jobs than it benefits. The CBO's recent report projects a loss of 500,000 jobs should the minimum wage be raised to $10.10, even though the same report indicates that another 900,000 people would be lifted out of poverty. The benefit of higher wages for some might not outweigh the cost of so many additions to the safety-net rolls.

But is $10.10 really enough? Might it even be too much? That depends on a number of factors. For example, you'll occasionally hear that the minimum wage should simply be pegged to inflation. This is trickier than it sounds on the surface, because the starting point for our inflationary peg matters a great deal, especially if we want to start with the nominal minimum wage in effect at that point. This chart illustrates the problem with that argument:

The starting rate of the minimum wage matters a great deal. If the minimum wage had simply been pegged to inflation (by tracking the Consumer Price Index) from its inception, it would be more than 40% lower today than it actually is because the very first minimum wage was so small. However, if the minimum wage began to track inflation after its postwar boost to $0.75 an hour -- the largest percentage increase in its history -- it would end up paying out about $7.44 an hour today. As you can see, that particular peg would have kept the minimum wage growing at very much the same pace as it actually has through legislation.

But if we force the minimum wage to track only certain components of the CPI, the picture again changes in important ways. We all know that health care costs have soared in our lifetimes, but what about rent? These are two of the most important components of any family's budget, and they present dramatically different pictures of inflation: 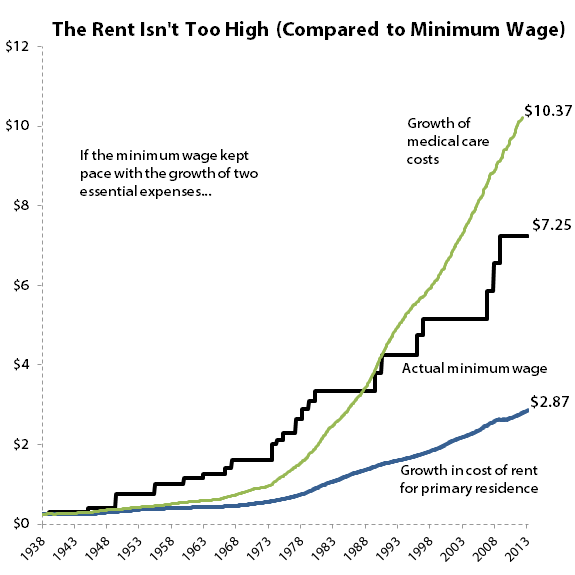 It's probably not realistic to peg the minimum wage to the growth of medical costs, but when we start tracking the rise of rents in 1968, we again find that the new $10.10 target is very close to what the minimum wage would be today if it simply followed the course of an essential expense.

Other economic measures continue to support the argument for a $10.10 minimum wage. The average monthly household income has actually surpassed the growth of inflation over time from all three starting points: 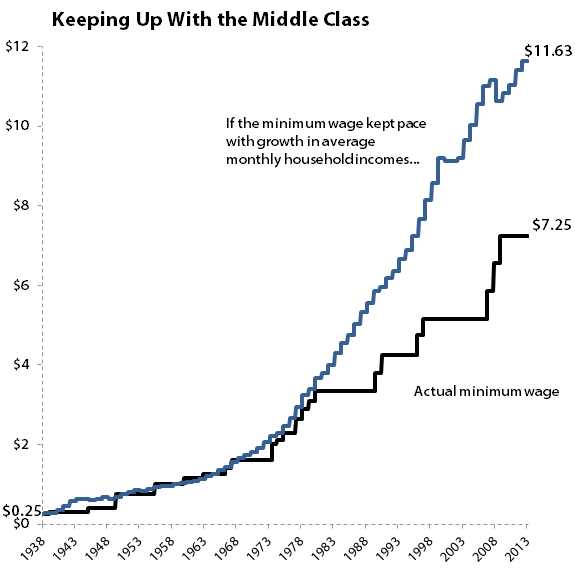 Every now and again you'll hear someone argue that the minimum wage should be raised to reduce inequality between the richest and poorest Americans. However, if we treated America's poorest like America's richest, then the minimum wage might be a bit unsustainable: 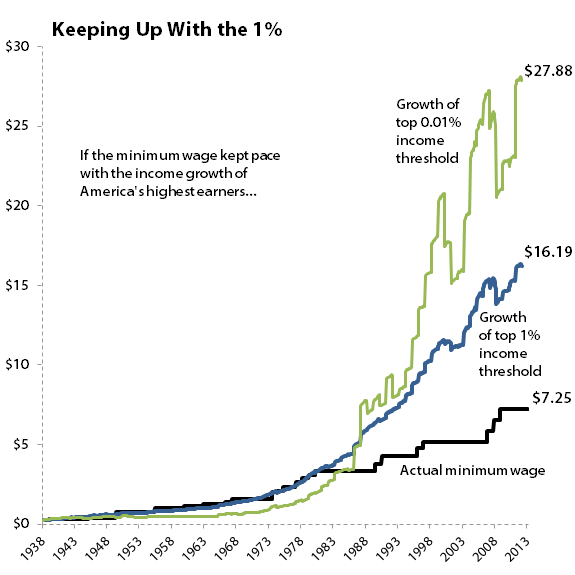 That's not to say that there's no argument for a minimum wage over twice as high as what we have today. In fact, when you look at growth of the American economy, and the growth of Americans' disposable income, you'll see that a $20 minimum wage might not be so crazy after all: 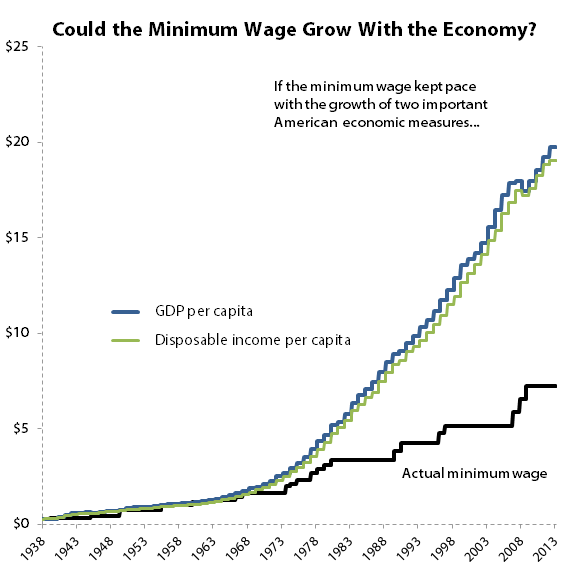 Both adjustments, on a per-capita basis, push our new minimum wage over $19 an hour, and the results are similar when we adjust from 1950 and 1968 as well. If the American economy is really producing almost 8,000% more per person in nominal terms today than it was when the minimum wage was enacted, shouldn't every American have some claim to 8,000% more in nominal wages than their grandparents did in 1938?

There are a number of ways to frame the minimum wage debate, and these charts are only a starting point at best. When you look over the changes here, keep in mind that the American economy is incredibly complex and has millions of moving parts. Changing the size of an economic part as integral as the minimum wage is likely to have far-reaching effects that even the most careful analysis fails to fully understand. Even if you disagree with the other side's stance, you might find that they bring a valuable perspective to the table.

But what do you think the minimum wage should be? Let everyone know by leaving a respectful comment below.

Add Alex Planes on Google+ or follow him on Twitter, @TMFBiggles, for more insight into markets, history, and technology.