If Intel can hit this goal, then this bodes well for 2015
From a financial standpoint, whatever tablet goal Intel actually hits during 2014 will have a fairly negative financial impact due to high contra-revenue to offset a high platform bill-of-materials cost. However, while this will hurt gross margins during 2014, things get much better as the contra-revenue essentially disappears in 2015.

To illustrate the point, let's work through the hypothetical financials with the following assumptions:

So, if all goes as planned according to this Digitimes piece, Intel will be able to go from a $600 million loss to a $750 million positive gross margin. From a year-over-year perspective, Intel will actually add $1.35 billion in gross profit. Since this gross profit doesn't require any incremental operating expenses, it essentially falls to the bottom line. Assuming a 27% tax rate, this suggests an incremental $0.19/share during 2015 from 2014 levels.

As long as the PC client group decline slows and data-center grows, estimates too low
Take a look at the current analyst estimates (per Yahoo! Finance): 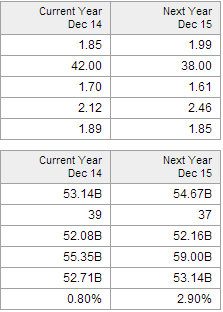 That said, with Intel's LTE ramp extending into 2015, the PC and tablet "merger" at the 14-nanometer generation potentially sustaining PC Client Group revenues going from 2014 to 2015, and growth in mobile apps processors implies that Intel could come in well ahead of these estimates. Oh, and if PC revenues actually come in better than expected during 2014, this once again bodes well for 2015 as the revenue base starts higher.

What does this mean for competitors?
With Intel looking to get extremely aggressive with market segment share, this could be a negative for the other merchant chip vendors. In particular, Qualcomm (NASDAQ:QCOM) -- which has seen some pretty substantial tablet market share gains during 2013 and 2014 -- could see its tablet-oriented chip sales growth slow. Further, any design-outs from more popular sockets (such as the Kindle Fire HDX or the latest Google Nexus) could further serve to sour sentiment. That said, tablets aren't a huge part of Qualcomm's chip business.

The real losers would likely be Taiwan Semiconductor (NYSE:TSM), as each Intel chip sold into tablets (at least once Intel's SoFIA -- the integrated modem/apps processor part -- is moved to Intel's own process) is a loss on TSMC's part.

This argument also applies to ARM (NASDAQ:ARMH) which would for each Intel chip sold into a tablet lose pretty substantial IP royalties lost (and a big part of ARM's story is that it has had nearly 100% share and growing content share). The financial impact for ARM may not be as large as the "sentiment" impact, as ARM's essentially monopoly position on mobile chip IP is "broken" in the eyes of investors. In either case, Intel success in tablets (and eventually phones) could lead to multiple compression for ARM's stock.

Foolish bottom line
At the end of the day, Intel has no choice but to aggressively push into the tablet market in order to offset the loss of units at the low end of the PC market. If Intel can be very aggressive and actually nail that 60 million unit goal, then sentiment around Intel should improve and the stock could be rewarded with a meaningfully higher multiple than it commands today.