Will Intel's Airmont CPU core ever find its way into a smartphone chip?

A couple of weeks ago, Intel's Missing Chip, explored the "fate" of a potential 14-nanometer smartphone chip based on Intel's ( INTC -0.51% ) upcoming CPU core code-named Airmont (if you need a refresher on the code-names, read the article linked above). The conclusion was that while Intel had every intention of selling Airmont into the tablet and low-end PC market, the CPU core was never slated to find its way into phones, giving way immediately to its successor, Goldmont. In this article, it's worth digging a bit deeper into the "fate" of the Airmont core. 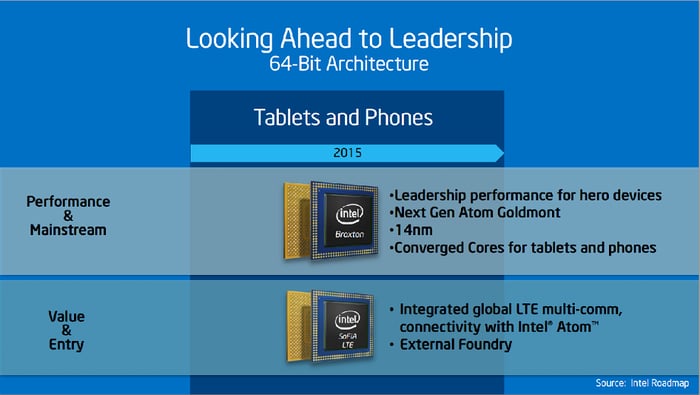 Now, for the majority of 2015, the "value & entry" product – known as SoFIA – will be built on TSMC's ( TSM -1.95% ) 28-nanometer high-k metal gate process and will likely sport 1-2 Silvermont cores (see Intel's SoFIA Is Necessary for more details). However, as Intel's best shot at competing is by delivering superior performance per dollar to its customers, there is real incentive to move this to Intel's in-house manufacturing plants/technology.

At the Investor Meeting, CFO Stacy Smith and CEO Brian Krzanich made it clear that by the end of 2015, the company would update this SoFIA lineup with a part built on Intel's latest-and-greatest 14-nanometer manufacturing technology at its in-house manufacturing plants. However, no details were given about this particular part and it is likely that we won't see it in shipping devices until 2016.

That being said, it's not hard to guess
By the end of 2015/early 2016, the Goldmont-based (that's the second CPU after Silvermont) Broxton system-on-chip will be in its full ramp, and Intel will likely be preparing the launch of its next generation 10-nanometer product by mid-2016 for the high end. The 14-nanometer process will be quite mature by then and the plethora of server/PC/high end phone and tablet products will have largely "paid for" the process. 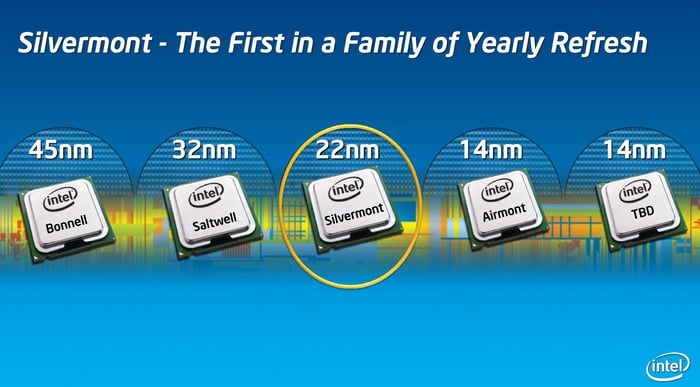 This implies that the 14-nanometer node will be mature and ready to support a chip meant for extremely cheap, high-volume phones and tablets. Compare this to the fabless companies such as Qualcomm ( QCOM -0.29% ), reliant on TSMC, which will probably be just beginning its 16-nanometer FinFET ramp (and Intel's 14-nanometer should have significant performance/density advantages), which will be unsuitable for really cheap chips.

This is where the Airmont CPU core can really shine in phones. On 14-nanometer, it'll offer impressive performance per watt (far beyond anything built on 28nm or 20nm), it'll take up fairly minimal space (leaving room in a fairly small die space for other IPs such as the communications/connectivity), and should still be meaningfully slower than the Goldmont core and its 10-nanometer successor in the high end parts, so as to not cannibalize the flagship.

What does this all mean?
At the end of the day, Intel's best way to differentiate against the likes of Qualcomm and Samsung's in-house teams is to offer the best performance/watt and performance/$0. Being at least a generation ahead on manufacturing technology and having the SoC design/IP story sorted out will enable Intel to be a very powerful player in the vast majority of handsets, which are becoming increasingly cost sensitive.

Now, as we've seen, it's not all about manufacturing technology – Intel still does not yet possess the SoC flexibility and agility demonstrated by Qualcomm. However, assuming that Intel can deliver on the design side of things, the manufacturing lead should ultimately lead to performance/watt and performance/$leadership – the two ingredients that, together, could win Intel a big piece of the smartphone pie and perhaps have pretty significant ramifications on Qualcomm's chip business, TSMC, and ARM Holdings.