Please ensure Javascript is enabled for purposes of website accessibility
Free Article Join Over 1 Million Premium Members And Get More In-Depth Stock Guidance and Research
By Ashraf Eassa - Mar 13, 2014 at 11:00AM

While some argue that Intel is releasing its phone SoC, known as SoFIA, just for show, there is a legitimate business argument for this product's existence.

Some Intel ( INTC -1.60% ) bears believe that the company's upcoming pair of chips (SoFIA 3G/SoFIA LTE) are unnecessary because customers can simply purchase an Intel Merrifield platform (built on Intel's 22nm FinFET technology, rather than TSMC's ( TSM -1.79% ) 28nm HKMG), as well as a discrete XMM 7160/XMM 7260 LTE modem from Intel. In this article, the case in favor of SoFIA is laid out.

SoFIA is highly integrated
In a single piece of silicon, Intel will likely offer the following with its SoFIA product(s):

Further, examining the following slide presented by CFO Stacy Smith at the Investor Meeting helps put into perspective what kind of die size will be used for all of this will: 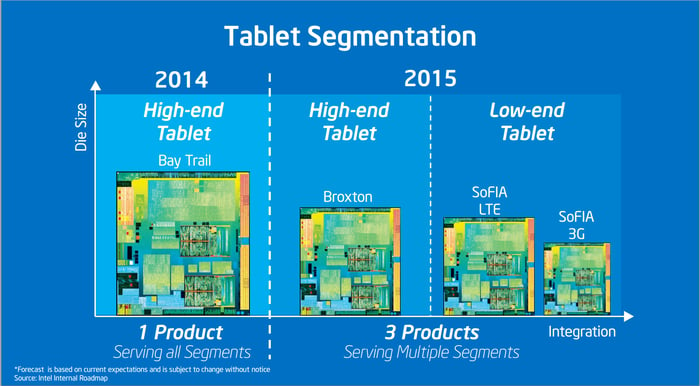 According to this picture, the Bay Trail SoC sports a die size of 102mm^2 and Broxton has been calculated to sport a die size of about 58m^2. Just eyeballing it, this would suggest that SoFIA LTE is roughly 50mm^2 and SoFIA 3G is roughly half of that at 30-40mm^2. Compare this to Merrifield, which, from a rough estimate using the following image, should weigh in at 70-75mm^2 and still require both an off-the-shelf connectivity combo chip and a discrete modem from Intel. 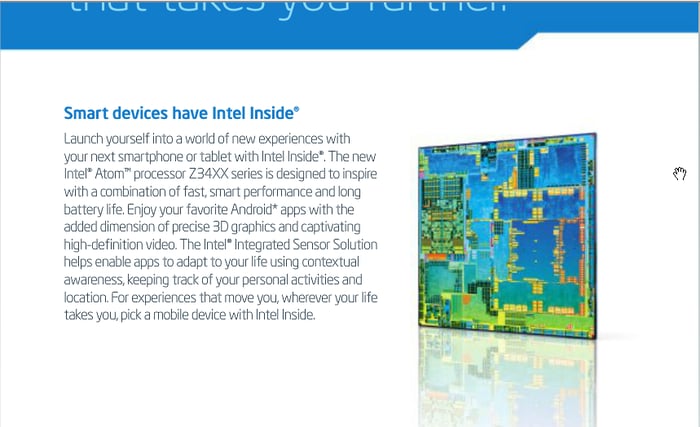 Of course, the SoFIA product is unlikely to have performance power even close to Merrifield (particularly on graphics), but it's important to remember that something like Merrifield is meant for performance phones (i.e., phones that cost more than $200), while SoFIA is intended for value/mainstream products (i.e., sub-$100 smartphones). Merrifield, which requires a lot of supporting chips to be viable in a phone, simply cannot compare to such a highly integrated solution for low-cost devices.

Intel is making the correct strategic move
While it is unlikely that SoFIA will be a world-beating chip, as Intel won't be able to lean on a manufacturing advantage here, it will most likely be very competitive thanks to a high single-threaded performance Silvermont core competing against a bunch of much weaker Cortex A7/A53 cores (albeit in marketing-friendly "eight core" configurations – SoFIA is likely to be a single core in the 3G instantiation and a dual core in the LTE instantiation). Also, the SoFIA LTE will benefit from integrating Intel's world-class XMM 7260 modem, which will elevate it above the likes of MediaTek and Marvell, putting it in direct competition with Qualcomm.

Indeed, while the XMM 7260 inside of the SoFIA LTE will likely be feature-reduced (as alluded to by Hermann Eul at Intel's Investor Meeting), it should still be plenty competitive with Qualcomm's MDM9x25 block integrated in many of its low-end offerings. The real trick here will be making sure that the rest of the SoC (imaging, connectivity, video, GPU, etc.) is competitive with Qualcomm's low-end offerings -- something that investors on the outside can't determine at this time.

Foolish bottom line
With SoFIA, Intel is swallowing its pride and developing a product that will meet the requirements of the market, at the cost of giving TSMC the manufacturing business. However, the real kicker here is that, if SoFIA is actually very successful, TSMC stands to lose a sizable amount of business once Intel ports this product (as well as its discrete modem) to its own in-house 14-nanometer process (and improves the performance significantly). The only question now is whether Intel will actually execute here, as integrated products have been on the roadmap before, only to get culled.