The Powder River Basin (PRB) is setting up to be the first domestic coal region to see a notable uptick in pricing. That's good news for Cloud Peak Energy (NYSE:CLD), which is focused on the region. However, bad weather in the early part of the year will likely lead to a relatively weak first quarter anyway.

Rebounding prices
According to the U.S. Energy Information Administration (EIA), utilities have burned down their coal stockpiles to their lowest point since 2010. You can see this in the image below, where the red arrow in January represents the overall coal stockpiles for utilities at the start of 2014. Although the stockpile burn has been broad based, in January the EIA specifically noted that the rate of use of PRB stockpiles implies "greater demand for delivery of PRB coal" this year. 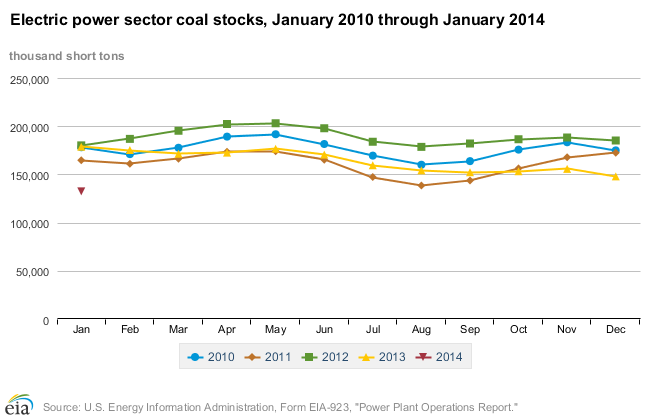 Pricing shifts in the market appear to back that up. For example, PRB coal has seen a $0.50 price increase over the last month or so. While other regions saw similar or even larger absolute price increases, the PRB's advance translates into a 4% price hike—roughly double the next closest price advance.

In fact, during their fourth quarter conference calls, the CEOs of both Arch Coal (NYSE: ACI) and Peabody Energy (OTC:BTU) noted that PRB coal prices were up some 40% from their lows. About 45% of Arch Coal's business is PRB coal while that region accounts for around 40% of Peabody's business. And both Arch and Peabody noted continued improvement in the domestic thermal market when they reported first quarter results.

That's good news for these miners, even though both posted first quarter losses, and for Cloud Peak, which operates exclusively out of the PRB. And after working hard to cut costs, this trio should be able to report solid year over year PRB results. For example, Peabody's fourth quarter costs in the PRB were 4% lower year over year. Arch saw a cost decline of nearly 5% in 2013. And while Cloud Peak's costs went up last year, that was largely attributable to one-time events that are behind the company. In the current year, Cloud Peak's costs should trend lower and, despite the increase, Cloud Peak still pulled coal out of the ground for less than either Arch or Peabody.

But the benefit won't show up right away
The problem for the first quarter, however, is that stronger PRB pricing and demand isn't likely to show up in the numbers. Why? Bad weather. Cloud Peak made specific reference to the hard winter in its fourth quarter earnings release, with CEO Colin Marshall saying, "The combination of severe weather and weak rail service left us with lower shipments than we anticipated in the fourth quarter and full year."

Later in the press release, it was noted that rail problems "continued in early 2014." Moreover, it went on, "We understand the railways are taking measures to improve service but that it will take some time to implement." What that means is that first quarter PRB shipments are likely to be light, which is exactly what happened at Arch in the first quarter; CEO John Eaves specifically highlighted "the impact of rail performance issues" when talking about Arch Coal's $0.59 a share first quarter loss.

You'll have to dig a little to see this at Arch and Peabody, where PRB coal is only one region in which they operate. However, PRB rail delivery delays will be front and center at Cloud Peak because it only does PRB coal. In fact, the first quarter highlight might be price increases overshadowed by shipment delays. The end result is likely to be a relatively weak first quarter for Cloud Peak Energy.

Think longer term
The thing is, most shipment delays are just that, even if they make the first quarter look bad at PRB pure play Cloud Peak. So don't get bogged down in Cloud Peak's sales volume in the first quarter -- focus on price, because that's likely to make the rest of the year look a whole lot better when those delayed shipments get made.