Big 5 Sporting Goods (NASDAQ:BGFV) delivered lackluster earnings for the first quarter of 2014 on Tuesday. But weakness seems to be mostly related to temporary factors, so the company could deliver better numbers in the coming quarters. Besides, Big 5 Sporting Goods looks materially undervalued in comparison to peers such as Cabela's (NYSE:CAB) and Dick's Sporting Goods (NYSE:DKS). Could this be a buying opportunity?

Fears over the possibility of tougher gun control regulations produced a big acceleration in gun and ammunition sales last year, and this is making comparisons particularly challenging in 2014. Besides, warm and dry weather conditions in many western markets throughout the winter season negatively affected sales of winter related products.

CEO Steven G. Miller explained the situation in the earnings press release: "As expected, our first quarter results declined when compared to a very strong performance during the prior year, due largely to substantially reduced demand for firearms and ammunition products and soft sales of winter products resulting from warm and dry conditions in most of our western markets throughout the winter season."

Management said in the earnings press conference that sales excluding these two categories "performed positively, with same-store sales increasing in the solid low-single-digit range for the quarter."

Considering that other categories are performing much better, overall results seem to be disproportionately affected by transitory headwinds in guns and ammunition and winter products.

If recent weakness is in fact due mostly to unusually challenging comparisons and unfavorable weather conditions during the period, then the company should deliver a considerable improvement in performance over the coming quarters.

Big 5 Sporting Goods vs. Cabela's and Dick's Sporting Goods
Cabela's reported earnings for the first quarter of 2014 on April 24, and the company was also hurt by a considerable decline in guns and ammunition sales versus unusually high levels in the prior-year quarter. In the words of CEO Tommy Millner: "In the first quarter, we anniversary the most difficult comparisons versus the firearms and ammunition surge last year."

Dick's Sporting Goods delivered better-than-expected sales for the quarter ended on Feb.1. Net sales adjusted by the extra week in 2012 increased by 12.5% to $1.9 billion during the quarter on the back of a big in jump of 7% in adjusted comparable-store sales.

CEO Ed Stack is feeling quite optimistic about Dick's Sporting Goods and its prospects for the rest of the year: "As we look to 2014, we believe our robust and growing omni-channel network and exciting merchandising opportunities will support double-digit growth in earnings."

Looking at historical valuation ratios, Big 5 Sporting Goods has typically traded at a lower P/E multiple than Dick's Sporting Goods, and roughly in line with Cabela's over the last several years. However, the current P/E ratio near 12 is not only historically cheap for the company, but also a significant discount versus both Dick's and Cabela's. 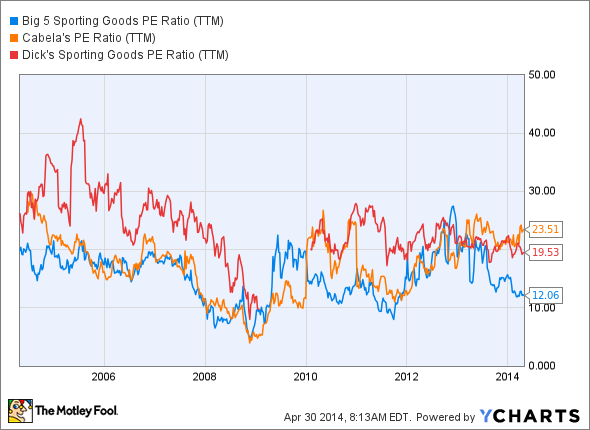 If Big 5 Sporting Goods can leave its weakness in the past over the coming quarters, then the stock offers plenty of upside potential from current valuation levels.

Foolish takeaway
Big 5 Sporting Goods is delivering lackluster financial performance lately, but there are valid reasons to believe this may be related to transitory factors such as tough yearly comparisons due to a surge in gun and ammunition sales in 2013 and unfavorable weather conditions. The stock looks undervalued in comparison to peers such as Cabela's and Dick's Sporting Goods, so there's a good chance the current weakness in Big 5 could present a buying opportunity for long-term investors.