A high short interest combined with low institutional ownership tends to be a fairly good sign that Wall Street isn't particularly thrilled with a company. Even so, Wall Street isn't always correct in predicting how a stock will perform over the long term.

And so far, bears seem to be sitting pretty, as the stock has declined by 35% year to date. So let's take a closer look at two reasons why Wall Street is so bearish on this small-cap biotech. 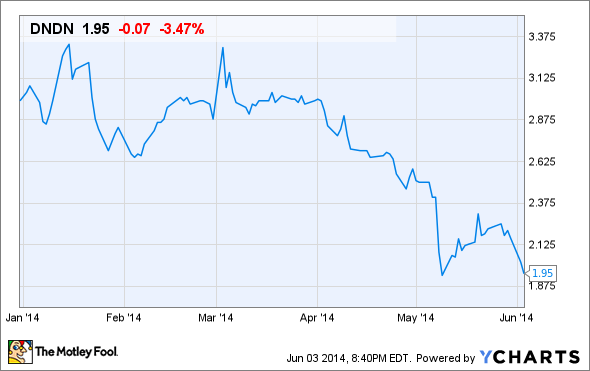 Reason No. 1
Dendreon's prostate cancer treatment Provenge is facing stiff competition in the marketplace from newer drugs. Since being approved in 2011, Johnson & Johnson's (NYSE:JNJ) Zytiga has taken the prostate cancer market by storm. As it showed strong clinical benefits in terms of slowing disease progression and overall survival in late-stage trials, the drug has become a widely used front-line treatment. Keeping with this idea, J&J reported a whopping $512 million in first-quarter sales for Zytiga.

Medivation (NASDAQ:MDVN) and Astellas Pharma's Xtandi has also become a preferred form of treatment for prostate cancer since its commercial launch in 2012. Per the first-quarter numbers, Xtandi saw $172 million in worldwide sales, compared with only $70 million for Provenge. In short, newer therapies are simply out-competing Dendreon's drug.

Reason No. 2
Dendreon's balance sheet is a mess. Per the first quarter, the company reported a net loss of $36.4 million, or $0.24 per share. While Dendreon's cost-cutting measures have helped to shrink this net loss by a substantial 50% year over year, you should keep in mind that the company now has an accumulated deficit of $2.3 billion.

Looking ahead, Dendreon expects its current cash burn rate and Provenge sales to give the company about a 12-month cash runway. With $26.3 million in convertible senior notes being due by June 15 of this year, however, the company is going to keep being pressured on the financial front. There is a good chance that Dendreon will have to resort to another round of dilutive financing to meet its financial obligations at some point relatively soon.

Foolish wrap-up
Dendreon has been the poster child for failed expectations ever since its share price topped over $50 following Provenge's approval. Once upon a time, investors believed Provenge would see Zytiga- or Xtandi-like sales numbers, but that appears to be increasingly difficult to achieve in the wake of increasing competition in the prostate cancer market. Although Provenge will be launched in Europe later this year, it may be too little, too late. Put simply, the company's financials are problematic, and even more prostate cancer treatments could be approved within the next two years.

With that being said, I think there is a remote possibility that Dendreon gets bought out in the near future. Provenge sales have stabilized in recent quarters, and as such, it looks like they could average around $250 million to $300 million per year moving forward. Given Dendreon's current market cap of a mere $300 million, there is certainly some value here for a larger player, especially one that might be interested in pursuing Provenge as part of a combo treatment. Even so, I don't think you'll see a large pharma massively overpay to gain access to Provenge, given that Dendreon isn't exactly in a position of strength at the moment.