Whenever the debate about the minimum wage comes up it's inevitable that a comment about the impact on McDonald's (NYSE:MCD) dollar menu comes up. In New York, McDonald's workers began protesting in 2012, demanding a $15 per hour wage, to which one commenter quipped, would lead to a $10 hamburger.

It's true that increasing wages on companies like McDonald's would likely lead to higher costs and prices, but labor is less than a quarter of the cost of what you pay for at the fast food giant, so the impact may not be as big as you think. McDonald's has not commented directly on the financial impact of a minimum wage increase, so we don't have company estimates to go on right now. McDonald's also doesn't break out detailed labor data like how many workers make minimum wage, manager salaries, or what percentage of labor costs go to wages and benefits, but we can glean some insights from their financial reports. Below, I'll estimate what a higher minimum wage could mean for McDonald's and what it might cost you, something others have done in the past but with little consensus even in the academic community.

For the purposes of this analysis, I'll limit the scope to McDonald's direct store labor costs, although input costs from food packaging, and other inputs into the business may also increase if the minimum wage were raised. I'll use a simple analysis that should give us a ballpark idea of what increased labor costs would mean for prices at McDonald's.

Labor ends up being about a quarter out of every dollar you spend at McDonald's.

What makes up a hamburger?
Based on McDonald's company owned store data, we can approximate the costs that go into producing food at stores around the world. From there, we can approximate just what a $10 or even $15 minimum wage might mean for the cost you could pay for a Big Mac in the future.

McDonald's company -owned stores brought in $18.9 billion in revenue last year and spent $4.8 billion on employee payroll and benefits. We can ballpark the total increase in cost of a burger if we assume that all labor related costs will rise uniformly with the minimum wage, which probably overestimates the impact but without more detailed data it's a good approximation.

Source: Data from McDonald's SEC filings, calculations are the author's.

You can see that prices would go up but a $10 minimum wage would cost consumers about a dime more per dollar spent and a $15 minimum wage, or more than doubling pay, would cost about $0.27 more per dollar. What's interesting is that labor is only the second largest cost component and food costs should be watched more closely than the minimum wage debate.

Labor isn't the problem
While labor gets the headlines at McDonald's, if you want a cheaper hamburger you should be putting a focus on global food prices. Since the minimum wage was last increased, the consumer price index for beef is up 38% and vegetable and soft drink costs are up as well. 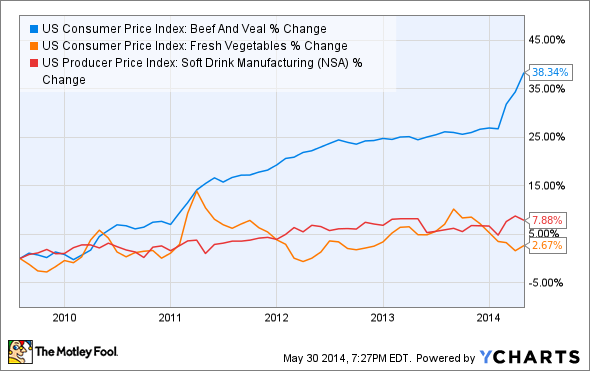 US Consumer Price Index: Beef And Veal data by YCharts

Food costs account for 33.7% of everything you buy at McDonald's versus 25.6% for labor. So, you should be mad about the cost of beef that caused the $1 double cheesburger to become a $1 McDouble (which has one less slice of cheese) in recent years.

How does this stack up to previous studies
Others have gone about trying to figure out the impact a higher minimum wage would have on costs with widely varying results. Some, like Time Worstall at Forbes have argues that demand will drive prices, not costs, meaning that McDonald's may have little recourse to rising costs.

Meanwhile University of Kansas School of Business student Arnobio Morelix created a model that found a $15 minimum wage would the cost of a Big Mac about $0.68, or 17%.

Any calculation involves assumptions and some level of guess work, but I think my estimate is in a reasonable range using public data that's easy to understand. My estimate of a 27.3% increase in McDonald's prices with a $15 minimum wage also falls between the studies cited immediately above and I would be the high end of any possible price increase.

Food is a bigger component of McDonald's costs than labor but a higher minimum wage would cost you.

Prices are already going up
Whether the minimum wage is going up or not, McDonald's is getting more expensive. $2.99 value meals that were once commonplace are now almost nonexistent and the "dollar menu" has become the "dollar menu & more" with items like the $2 Bacon McDouble.

Small changes like taking a piece of cheese off an item or adding bacon and increasing the price are subtle ways to increase prices and McDonald's does it well. If labor costs go up to $10 or even $15 per hour you would see more subtle changes similar to this along with small price increases on regular items.

The bottom line is that a $10 minimum wage won't lead to a $5 cheeseburger at McDonald's. The increase in price would be 10% at most and more than likely any price increase would be hidden to most consumers like they have been since the minimum wage was last increased in 2009.

A little food for thought the next time McDonald's comes up in the minimum wage debate.

Note: A previous version of this article inaccurately assessed the potential price impact from a raise in the minimum wage rate. The Fool regrets the error.

What Will a Minimum Wage Increase Cost You at McDonald's? @themotleyfool #stocks $MCD Next Article
Current