The first compressed natural gas, or CNG, capable half-ton pickup truck rolled off of an assembly line in Kansas City last November. It sported a 3.7-liter V6 engine, hardened pistons and valves, a factory-installed gaseous fuel-prep system, and greatly reduced costs. While a conversion kit for a gasoline-powered truck costs between $6,000 and $9,500, the new natural gas fuel-capable engine only sets you back an extra $315 plus engine costs. The manufacturing facility was owned by Ford Motor Company (NYSE:F), and the truck was none other than a 2014 model of the best-selling F-150.

However, drivers had little appetite for the natural gas vehicle, or NGV, from Ford Motor Company, which recorded just over 200 sales from December to the end of March. The cheaper, cleaner fuel surely isn't to blame, but all fingers can be pointed at the limited infrastructure nationwide. Fueling stations are few and far between, which makes it more likely for Bi-Fuel vehicle owners to run solely on gasoline tanks while leaving their natural gas tanks primarily empty. Why even bother buying CNG-capable vehicles in the first place?

Ford Motor Company isn't letting a slow start derail its plans to build the NGV market, but perhaps we're thinking about the problem backwards. While we readily accept that electric vehicles can be recharged at home, we bemoan the limited infrastructure available for NGVs. Well, many American homes in temperate climates are fitted with natural gas lines -- representing a massive potential market. So, why shouldn't you be able to refuel your CNG-capable Ford F-150 at home with the ease of an electric vehicle? General Electric Company (NYSE:GE) asked the same question and is developing a solution that could arrive as early as next year.

At home natural gas fueling?
Natural gas fueling stations are actually already available for homeowners, but they will set you back about $5,000 per unit and five to eight hours for a full tank. That's because they're meant for businesses that can justify high costs and lengthy refueling times with commercial fleets and sizable budgets. Unfortunately, current setups remain largely out of reach for most homeowners, but General Electric is looking to change that.

In July 2012, Advanced Research Projects Agency for Energy, or ARPA-E, awarded a project to GE Global Research, Chart Industries, and the University of Missouri that aims to make CNG fueling stations more economical for homeowners. The project was supported by $2.3 million from ARPA-E and General Electric and is due for completion at the end of this year. What are the ambitious goals? To lower the costs of a refueling station to $500 and refueling times to less than one hour.

That may sound like an impossibly high bar to meet, but General Electric is actually well-versed in compressing natural gas. The company's CNG In A Box technology offers an integrated CNG fueling solution that takes natural gas directly from a pipeline and converts it into vehicle-ready fuel. The unit even arrives ready to install in a compact shipping container. An at-home refueling station would essentially be a scaled-down, compact version of the CNG In A Box technology. 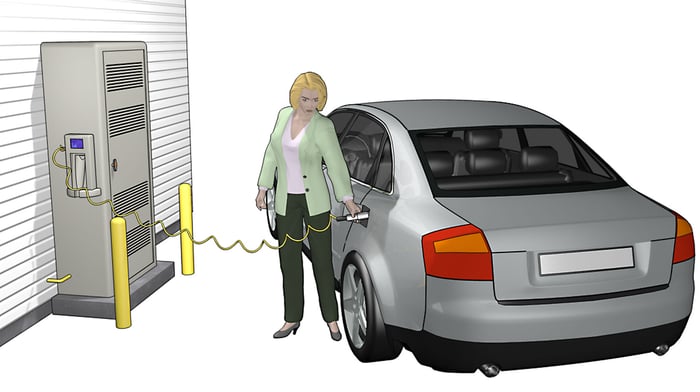 That could be a boon for automakers investing in NGVs. Unlike all-electric vehicles that really are suppressed by limited national recharging infrastructure, CNG-capable vehicles typically come with two fuel tanks: one for gasoline and one for natural gas. That makes the growth prospects for Ford Motor Company and its competitors a bit more promising in the early stages of the market's development, since range anxiety is a non-factor.

However, drivers may not be willing to fork over the extra cash for a Bi-Fuel vehicle if they'll rarely fill up the CNG tank. The General Electric at-home refueling station could change the game significantly. If you knew you had a cheap, steady supply of vehicle fuel in your garage or driveway, then you may be more willing to buy the CNG-capable F-150 instead of a gasoline-only model. After all, the average national selling price of CNG is just $2.00 per gasoline equivalent gallon including taxes and service charges. In other words, the payback period on your investment (a cheap fueling station and gaseous-fuel prep system for your truck) would be extremely short depending on your driving habits. That's especially true if you drove exclusively on CNG, which would be a distinct possibility.

Foolish bottom line
General Electric is often at the forefront of emerging technologies and industries -- and its early position in the NGV market is no different. Similar to Ford Motor Company's long-term bullishness on CNG-capable vehicles, General Electric is willing to take short-term risks for big, long-term gains. When the project's completion is announced at the end of 2014, investors will learn just how soon at-home fueling stations will be available for purchase. Whether it takes one year or until the end of the decade for the technology to be widely deployed, this is exactly the kind of technology the market needs and is yet another sign that NGVs are for real.