Netflix (NASDAQ:NFLX) is changing the way business is done in the entertainment industry. Yes -- again.

The well-regarded industry watchers at Deadline Hollywood Daily call the deal "precedent-setting" for a couple of reasons:

The series will bow on Netflix on a country-by-country basis, following the TV schedule in each market. For the U.S., that's expected to mean a September 2015 Netflix premiere, just before the second season starts on Fox.

The complex international distribution picture could have tripped up the entire deal, and it almost certainly added to the final price tag. In the end, Netflix thought that Gotham was worth the negotiating trouble and the high costs, so the deal is done.

"The Batman origin story is sure to have massive global appeal, so it is fitting that, along with Warner Television, we have created a new model for distributing a show that international and domestic audiences will love," said Netflix content chief Ted Sarandos.

"In this era of new business models and expanding windows, this is an unprecedented deal for our company and our industry," clarified Warner Television's president Jeffrey Schlesinger.

That honor really falls to Sony (NYSE:SONY), which has already completed two such multi-territory deals with Netflix.

Both of these Sony contracts are reportedly close to the Gotham structure, covering all of Netflix's overseas territories in one monolithic agreement.

From Netflix's perspective, this is the only way to fly nowadays.

It's true that the U.S. market is central to the company's financial performance, collecting 74% of all streaming revenues over the last six months. Moreover, the domestic segment is profitable while international operations are expected to show a loss for the full fiscal year.

However, it's a big world out there.

According to networking analyst firm Point Topic, there are about 120 million broadband households in North America today. That's only 18% of the global broadband market, which counts 679 million subscribers. Western Europe, where Netflix is adding a handful of new territories in the coming months, is already larger than North America. South and East Asia is not just bigger, but also growing faster. 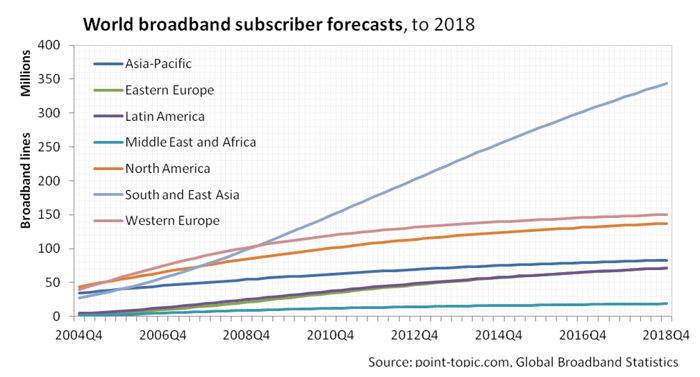 In other words, the key to high-octane subscriber growth is in international growth. Netflix has already acted on this realization and is sacrificing short-term profits in return for long-term growth in overseas geographies.

And to make this international expansion strategy work, Netflix must bring a lot of high-quality content to its non-U.S. subscribers. For that reason, I expect many more of these global agreements, following the footsteps of Gotham and The Blacklist.

There are no guarantees that this strategy will work as planned. Netflix is paying a lot of money for largely unproven content batches. If the shows don't deliver on their theoretical audience appeal, Netflix is stuck paying million-dollar bills on a worthless asset with no subscriber wins to show for it.

So, Netflix is taking a risk here, and it will take many more with future multi-territory distribution deals. And I think that's exactly the right thing to do.

"Only those who dare to fail greatly can ever achieve greatly," said Bobby Kennedy. Netflix is shooting for no less than world domination, here, so the company must make some extravagant bets along the way.