Legal marijuana is the fastest-growing industry in America right now. Is it time to invest?

The relaxation of U.S. laws prohibiting the recreational and medicinal use of marijuana has created a host of new public companies hoping to catch lightning in a bottle, and for good reason. According to industry experts, legal cannabis is on track to post 60% growth this year, raking in over $2.5 billion in revenue. Even more impressive is the fact that the plant's use is still banned in most states, and completely at the Federal level. In short, the marijuana industry has ample room to grow going forward.

Because the recreational marijuana market alone could potentially quintuple in value by 2019, "marijuana stocks" saw their market caps explode northward earlier this year. Now that the inevitable problems associated with any new industry have reared their ugly head--such as banks refusing to provide loans, we have seen most of these same stocks fall, almost as rapidly as they went up. That being said, the industry appears to have momentum on its side as more states consider decriminalizing marijuana. So the question, then, is simple: Is now the perfect time to buy marijuana stocks?

Marijuana stocks have had a turbulent year
The rise and fall of marijuana stocks is perhaps best captured by the medical marijuana company GW Pharmaceuticals (GWPH), and by Medbox, (NASDAQOTH: MDBX) on the distribution side, illustrated by the chart below. 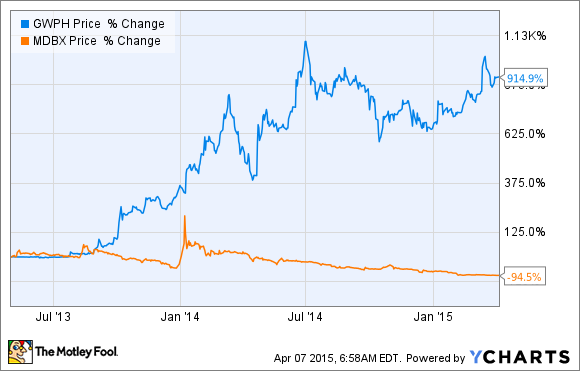 GW shares have now risen by more than 900% since 2012, with most of this eye-popping growth coming within the last 12 months. But the stock has now fallen by roughly 20% from its former highs.

And Medbox's story is equally as impressive. Its shares rose hugely from their 52-week lows last year, only to crash in absolutely stunning fashion.

Given that marijuana stocks have been rapidly declining for some time, we can't point to the general market correction as the underlying cause, although it probably is helping to drive them even lower at this point.

Should you invest in this powerful new industry after the recent pullback?
Options for investors looking to get in on some "green gold" appear, to me, extremely limited by the dearth of reputable companies, and the huge roadblocks that remain.

Among the few that are on the level, GW Pharmaceuticals (GWPH) is easily the top name worth considering. By the same token, this stock helps to illustrate some of the problems associated with investing in this sector at this time.

GW is in the business of developing medicinal products based on marijuana-derivatives called cannabinoids. The company to date has gained regulatory approval for Sativex in 11 countries as a treatment for spasticity due to multiple sclerosis. However, Sativex has yet to be approved in the U.S., which is by far the biggest market for this indication.

Although GW has a promising clinical pipeline headlined by Sativex and Epidiolex indicated for rare types of pediatric epilepsy, the company still looks, to me, massively overvalued, despite the recent pullback. For example, GW shares are presently trading at 38 times 12-month, trailing revenue.

Perhaps more problematic is the fact that earnings per share are expected to gap down by over 60% next year due to climbing clinical trial costs. In sum, most of GW's valuation appears to be linked to the general marijuana craze, an issue I discussed prior to the stock's huge drop from its previous highs.

Turning to stocks involved more on the recreational side of marijuana, Medbox should serve as a warning to investors looking to exploit this novel business segment; i.e., biometrically encoded dispensing machines. Because banks have largely slammed the door on financing for the marijuana industry in general, Medbox, like most of its peers, has had to rely on dilutive financing to fund its operations. Specifically, Medbox has performed two separate capital raises that have helped to drive shares lower.

Safely waiting
Although the marijuana industry appears primed for jaw-dropping growth over the next decade, the limited financing options for start-ups, the lack of reputable companies, and the massive overpricing of the few decent ones, makes this industry too risky at this stage in its development, in my opinion.

Personally, I am content waiting safely on the sidelines until better financed entities enter the marijuana game like an Altria (MO 1.06%) or a Reynolds American (RAI), and the process of widespread legalization matures.