Marijuana stocks have soared this year as more states decriminalize the drug's recreational and medical uses. Even so, most companies developing marijuana-based products are years away from turning a profit, suggesting that a fair amount of this rapid appreciation is due to hype, not fundamentals.

GW Pharmaceuticals (NASDAQ:GWPH) is a British biopharma developing medicinal products based on marijuana-derivatives called cannabinoids. The company's claim to fame thus far is Sativex, a treatment for spasticity due to multiple sclerosis that is commercially available in 11 countries.

The company's share price has skyrocketed by 958% in the past year. With this in mind, let's consider two good reasons GW might now be extremely overvalued. 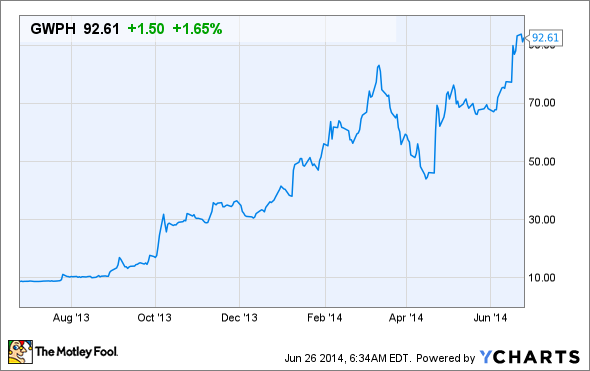 Reason No. 1
Although GW has a commercial product in hand in Sativex, we aren't seeing much in the way of top-line growth because the drug isn't yet approved in the U.S. Specifically, GW is expected to post only $50 million in revenue this year.

GW hopes to improve its top-line growth with commercial launches of Sativex in a host of additional countries within the next year. Even so, the U.S. is an important market, and an approval for Sativex as a treatment for multiple sclerosis won't be granted in the U.S. until the company completes a late-stage trial planned to begin later this year.

Looking ahead, GW plans to seek FDA approval for Sativex as a treatment for cancer pain, but the initial top-line phase 3 cancer pain data for an NDA filing aren't expected until near the end of 2014. In short, we aren't likely to see an approval for either indication within the next year.

Turning to other potential revenue drivers, GW is developing Epidiolex as a treatment for rare types of pediatric epilepsy. But the clinical work needed to gain an approval probably won't be complete for a while.

GW shares are trading at over 32 times projected 2014 revenue, and there is little reason to believe this valuation gap can be bridged by increasing product sales in the near future.

Reason No. 2
The prospects for GW's bottom line aren't much better. Over the next year, GW is expected to see its loss per share grow by nearly 15% due to increasing costs from expanding clinical activities. On the bright side, GW's pipeline is the its biggest strength; the company boasts perhaps the broadest clinical pipeline of any company in the marijuana industry.

Simply put, GW is going through the typical growing pains of any biopharma at this point in its life cycle, with costs far outstripping revenue. At the same time, clinically oriented companies such as GW typically don't go parabolic in the course of a single year, suggesting that its rapid share price appreciation is related more to a rising-tide phenomenon.

Foolish wrap-up
GW's recent hyperbolic growth makes little sense from either a top- or bottom-line perspective. And while we could point to investors placing a high valuation on the company's clinical pipeline -- akin to an Isis Pharmaceuticals (NASDAQ:IONS) or Nektar Therapeutics (NASDAQ:NKTR) -- I think this explanation is a bit of a stretch as well.

GW's pipeline, by contrast, falls much more on the speculative end of the spectrum due to the unproven nature of cannabinoids as treatments for diseases such as type 2 diabetes. GW's clinical candidates may ultimately bear fruit for blockbuster indications, but there aren't any good examples to point toward that would justify the company's rich valuation based primarily on its clinical activities.

Overall, I think GW has benefited greatly from the massive appreciation of everything marijuana-related this year. And while a number of marijuana stocks have cratered almost overnight lately, GW has bucked this downward trend and moved even higher. As such, investors with a long-term outlook may want to keep GW's present valuation, in relation to its underlying fundamentals, squarely in their mind going forward.