Please ensure Javascript is enabled for purposes of website accessibility
Log In Help Join The Motley Fool
Free Article Join Over 1 Million Premium Members And Get More In-Depth Stock Guidance and Research
By George Budwell - May 18, 2014 at 1:00PM

Marijuana stocks have been soaring this year as investors position themselves ahead of the anticipated sales boom in the industry. GW Pharmaceuticals and Medbox are two marijuana stocks that have clearly benefited from this rising tide phenomena. Here's a Fool's take on which stock offers the better risk-to-reward ratio.

The legal marijuana industry is expected to become one of the fastest-growing industries of all time, as its recreational and medicinal uses are now being widely decriminalized in multiple countries and U.S. states. Investors looking to capture some of this incredible potential growth, however, have few options outside of what amount to risky penny stocks.

GW Pharmaceuticals (GWPH) and Medbox (NASDAQOTH: MDBX) are two exceptions to this general rule, as both companies sport market caps and share prices substantially higher than most of their marijuana peers. With this in mind, let's consider which company offers the more compelling risk-to-reward ratio.

GW Pharmaceuticals is a British biopharma developing cannabis-based medicines for diseases such as drug-resistant childhood epilepsy, Dravet syndrome, Lennox-Gastaut syndrome, and multiple sclerosis spasticity. The company is known mainly for its multiple sclerosis treatment Sativex, which is commercially available in 11 countries. Sativex is in late-stage trials as a potential treatment for pain in patients with advanced forms of cancer, with the FDA granting the drug fast-track status for this indication earlier this year. The company hopes to report top-line data from the trial before the end of 2014.

GW also sees potential in its highly purified cannabinoid known as Epidiolex. The company hopes to develop Epidiolex as a treatment for a host of rare forms of pediatric epilepsy. To date, Epidiolex has been granted orphan drug status and is projected to begin late-stage trials as early as 2015.

Finally, GW has several other cannabinoid-based compounds undergoing clinical trials for a wide range of diseases, including type 2 diabetes and ulcerative colitis. In sum, GW offers perhaps the richest population of clinical candidates based on marijuana derivatives in the industry, making it a stock to watch.

Medbox offers a quick and easy solution to obtaining medical marijuana
Medbox makes vending machines that dispense a variety of medicines, including medical marijuana. This stock has been on one heck of a volatile ride over the past year, hitting a high of $73.90 per share before falling markedly to today's price of $18.47. 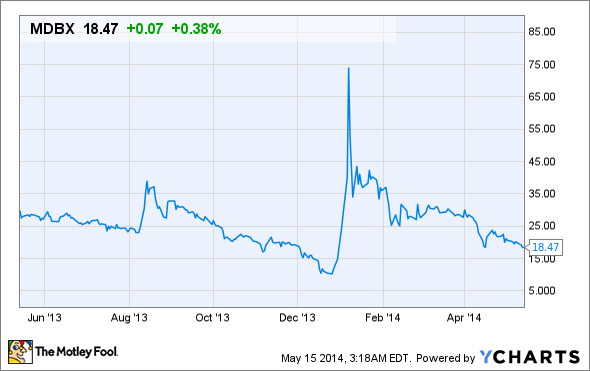 The problem quite simply was that Medbox became a poster child for momentum stocks, skyrocketing in anticipation of the legalization of marijuana in Colorado and other states. What's important to understand now is that Medbox's current share price is still valued at around 100 times 2013 revenue despite this recent dramatic downturn. Looking ahead, Medbox may require a capital raise after ending 2013 with less than $1 million in cash and cash equivalents. Medbox appears to suffer from a major valuation gap, and it's hard to see a way the company can quickly remedy this problem.

Foolish wrap-up
It's no secret that marijuana stocks have been all the rage this year, with some of these tiny companies exploding higher in a matter of weeks or even days. Nonetheless, we are starting to see Mr. Market come back to his senses somewhat regarding this speculative group of companies, evinced by Medbox's roughly 75% drop from its former high.

That being said, I think GW Pharmaceuticals is perhaps one of the few "marijuana stocks" worth considering as a long-term investment. The company has an intriguing platform that has been validated by the approval of Sativex as a treatment for multiple sclerosis spasticity and has incoming revenue from sales of the drug. Even so, GW's current valuation doesn't look cheap from a fundamental perspective, with the market clearly baking in some of the future revenue for its clinical candidates. Specifically, GW shares are trading at over 20 times 2013 revenue, making it a pretty expensive stock right now. So while GW still looks like better a pick than Medbox, I would still suggest that you wait until shares fall lower (or the pipeline develops some more) before considering a position.