Pentair is a stock that attracts investors from two different angles. It's a Dividend Aristocrat, and it's a stock to buy for investors looking for exposure to the management of water resources.

Pentair PLC (PNR -1.06%) is one of the lesser known Dividend Aristocrats -- stocks that have raised their dividend for 25 consecutive years or more -- but that doesn't mean it lacks attention from certain quarters. The company specializes in water flow technology (valves, controls, and process technologies) and often gets attention from investors looking for a thematic way to play the increasing need for the management of water resources. Are these two factors -- water and a dividend -- enough to make the stock a long-term buy for income seekers?

The theory is as simple as it is attractive. Long-term population growth, particularly in emerging markets, will lead to a 25% increase in freshwater demand by 2030. Moreover, we live in a world where, according to the UN CEO Water Mandate, one-third of the population already lives in "water-stressed countries." Given the strains that an increasing population will put on water infrastructure, for agriculture and industry as well as human consumption, the need for investment is substantial.

So is Pentair's long-term demand assured, and should you go ahead and buy this Dividend Aristocrat?

Investing is rarely that simple, of course, and the reality is that Pentair's prospects turn out to be quite cyclical in nature. The following chart demonstrates the significant declines in its revenue and operating income in the last recession. Don't be fooled by the dramatic increases from 2012 onward; that's due to a $5 billion acquisition of the valve and flow control operations of Tyco. (More on that later.) 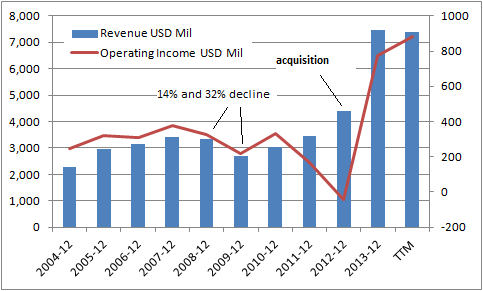 First, Pentair decided to exit the water transport business that it picked up from Tyco. This move accounts for $0.20 of the $0.25 reduction in 2014, and $0.25 of the $0.50 reduction in 2015. Pentair CEO Randall Hogan said the water transport business had consistently underperformed expectations and added: "[A]fter the deal closed, we saw some larger projects that canceled, and while there [has] historically been a flow of smaller projects each year, there's been virtually no new activity of consequence over the past year. This is due in part to the impact [on] the Australian economy from a sharp downturn in mining."

Second, the rest of the EPS reduction is mainly due to economic headwinds in the energy and industrial sectors, Pentair's two most important end markets. Economic uncertainty has caused revenue growth to be slower than the company expected, and ongoing deferrals in energy capital expenditures have slowed its growth. Indeed, one of the giants of the process control industry, Emerson Electric, has also talked of delays in capex spending.

Can it grow dividends fast enough?

One of the key questions in dividend investing is whether a company can grow its dividends in line with what investors might expect. To do this, it's important to be able to generate a good return on equity, or ROE. This is simply a measure of net income over shareholder equity, the idea being that a company can reinvest its profits -- after dividends are taken out -- and grow earnings again at the ROE rate.

Here is a look at its long-term ROE compared with Emerson Electric and Flowserve Corp. Ignore the exaggerated dip in 2012-2013; it's due to integrating the acquisition from Tyco. 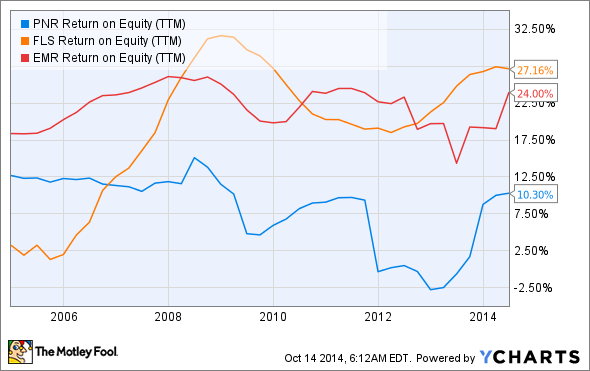 For argument's sake, assume its long-term ROE is around 11%. It's currently paying out 33% of its next year's earnings in dividends, so using the Gordon Growth Model, its expected dividend growth rate works out to just 7.4%. (In the Gordon Growth Model, the rate at which a company can grow its dividends, or g, is calculated using the formula g = ROE x (1 - D/E), where D is dividend per share and E is earnings per share.)

In other words, under this assumption, if you hold the stock for 10 years, it will be paying a dividend of $2.45 at the end of it -- representing 4% of its current yield.

Despite the attractiveness of its end-market story, Pentair is a somewhat disappointing proposition, at least for dividend-seeking investors. To grow its dividend better, the company needs to increase its ROE. In addition, investors shouldn't ignore the inherent cyclicality in its business. The latter issue isn't a problem in itself -- all economies go through cycles -- but it could be for an investor looking for solid dividend growth in a stock, and Pentair's current yield of 1.9% probably isn't enough to entice many income-seeking investors just yet.

Lee Samaha has no position in any stocks mentioned. The Motley Fool recommends Apple and Emerson Electric and owns shares of Apple. We Fools don't all hold the same opinions, but we all believe that considering a diverse range of insights makes us better investors. The Motley Fool has a disclosure policy.