Cadillac's new-for-2014 CTS sedan has won wide critical acclaim for its blend of luxury and performance, but it isn't drawing many buyers away from the German luxury brands. Cadillac's new president says the problem isn't the car, it's the Cadillac brand itself, and he's determined to change that. Source: General Motors.

For years, the "problem" with General Motors' (NYSE:GM) Cadillac brand was simple and obvious: The cars weren't good enough.

Specifically, Cadillac's products weren't good enough to be taken seriously by luxury buyers who might have chosen Cadillacs decades ago but have since come to favor German luxury brands like BMW and Mercedes-Benz.

"Cadillac" used to be synonymous with top-tier luxury, "best-of-breed" products. But for a long time, its products couldn't back up that reputation, and the brand lost its appeal.

Recently, things have started to change. Cadillac's latest models, particularly the ATS and CTS sedans, are as good as Germany's best -- maybe even better in some ways.

So say the experts. But so far, the evidence shows that BMW, Audi, and Mercedes buyers aren't flocking to Cadillac's showrooms. Very few people seem to be cross-shopping the new Cadillacs against their German peers.

Meanwhile, Cadillac's new products are hugely improved, but their higher prices mean they're now too expensive for many of Cadillac's existing customers. Without enough new customers stepping in, the brand's U.S. sales are down almost 6% this year.

That leads us to GM's big challenge with Cadillac: Why aren't more BMW and Mercedes and Audi buyers interested in these new Cadillacs, and what can GM do about it?

A big new ad campaign for Cadillac is coming

There are many things Cadillac will do, but a very visible one will be an all-new ad campaign.

Cadillac marketing chief Uwe Ellinghaus promises that the brand will unveil a new and different advertising approach next April. The beginning of the new campaign will probably be timed to coincide with the unveiling of the new range-topping Cadillac CT6 sedan at the New York International Auto Show.

We don't yet know what that advertising campaign will look like, and it's possible it hasn't yet been fully developed. GM announced last Thursday that Cadillac has hired a brand-new ad agency: Publicis Worldwide, an agency with deep experience with luxury brands. While Ellinghaus is said to have spent much of the past year plotting a new course for Cadillac, it's possible Publicis will be charged with creating the ads themselves.

Cadillac will present itself as a "bold American brand," new Cadillac president Johan de Nysschen said in a presentation to analysts last month. "Being American, we have this deep-rooted belief that the future will be even better than it is today." It will be "confident" and "sophisticated, but a modern progressive contemporary kind of sophistication, not the old-world grand chandeliers kind of sophistication. Not the lady in the ball gown, but in the seductive black cocktail dress."

But here's what Cadillac won't do: Emphasize the word "luxury." As Ellinghaus recently told trade publication Advertising Age, "If you need to say that you are luxury, you are not luxury. Louis Vuitton does not say they are luxury, they simply are."

Ellinghaus said that a key to the new Cadillac message is confidence. "Luxury brands need to display confidence," he said, in order to reach "confident, very educated customers who only accept brands on eye level." His goal: "To build the first luxury brand that just happens to make cars. That sounds like a joke, but we're serious about it."

The ads will be an important step for Cadillac. But de Nysschen doesn't think ads alone will draw the buyers Cadillac needs.

Why ads alone can't fix what's wrong with Cadillac
Why can't Cadillac advertise its way out of its sales slump? That has worked for other GM brands in the past. But Cadillac's situation now is different. As de Nysschen put it in a presentation to Wall Street analysts last month, Cadillac today faces "a challenge of relevance" that it needs to overcome in order to reach its hoped-for audience. 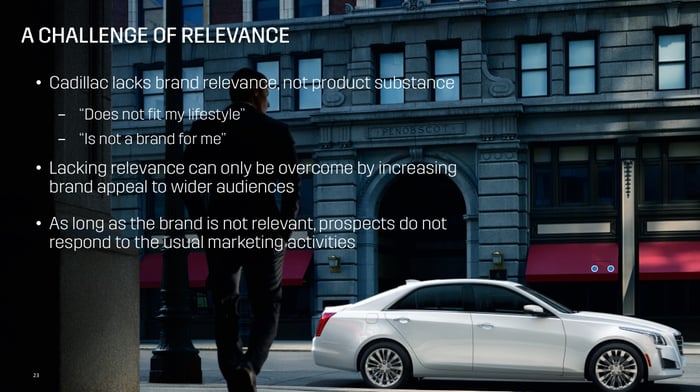 Think of it this way: There's a pool of potential customers Cadillac would very much like to reach. It's a group of people who drive cars from other brands now: Most drive a BMW, Mercedes-Benz, Audi, or Lexus, with a few Infiniti and Jaguar owners ,and maybe a few Tesla owners in that pool as well.

All of these people would be open to considering a Cadillac -- if they perceived Cadillac as a brand on par with (or better yet, a little above) the brand of car they own now.

But mostly, they don't see Cadillac as a brand they should consider. Because of that, typical marketing approaches don't work with that audience. In other words, it doesn't matter how much money GM plows into Cadillac's marketing if the target audience isn't listening.

That's what Cadillac has to change. But how?

How Cadillac will try to reclaim its historic place in the automotive hierarchy
One of the biggest challenges for Cadillac is demographic: According to IHS Automotive data, the average Cadillac buyer is 59.5 years old. That's nearly a full decade older than the average BMW (50.9 years) or Audi (50.3 years) customer.

De Nysschen wants to lower the average age of Cadillac's customers significantly. As he explained, much of the thought that has gone into Cadillac's brand positioning is centered around the need to make Cadillac "relevant for the millennials."

Central to that is the idea of "passion," as you can see in this Cadillac "brand identity" diagram from de Nysschen's presentation.

De Nysschen admits that this sounds like a "big marketing thing," but the idea of passion neatly sums up what de Nysschen and his team want the Cadillac brand to convey.

But how does an automotive brand convey "passion"? In part, it'll come from the products: One example de Nysschen cited is that future Cadillacs will exhibit an "almost fanatical obsession" with small details like the sound of doors closing, the feel of the buttons and knobs on the dash, the exhaust note, and so forth.

De Nysschen says that such attention to detail is part of creating "mythology and theater in the showroom." The message to potential customers is, "If we pay that much attention to little things, imagine the attention we pay to the big things."

Cadillac president Johan de Nysschen stands with a pair of Cadillac ATS-Vs, new high-performance versions of Cadillac's compact ATS coupe and sedan set to arrive at dealers next year. The ATS-V's twin-turbo V6 will make over 450 horsepower, GM says, enough to get an ATS-V from zero to 60 mph in under four seconds and give it a top speed of 189 miles per hour. Source: General Motors.

High-performance models will also help. Cars like the Cadillac CTS-V have already focused auto enthusiasts' attention on the brand. De Nysschen knows that building on that legacy is important, as those enthusiasts are often able to influence how others around them perceive auto brands.

Will it work?
It may be years before we can judge whether de Nysschen's and Ellinghaus' efforts to reposition the Cadillac brand are successful. As de Nysschen repeatedly emphasized in his presentation, this will be a very slow process -- think in terms of a decade or thereabouts.

But as I've said all along, Cadillac's renaissance will succeed or fail on the back of its products. If the next four or five new Cadillacs are as good as (or better than) the (very, very good) CTS sedan that Cadillac introduced last year, then I think the marketing effort stands a good chance of success -- because, first and foremost, GM finally has the right executives leading it.

But if the cars can't back up the message, it's probably hopeless. We'll see.