What: Breitburn Energy Partners (OTC:BBEPQ) participated in today's oil stock relief rally. At one point, units were up over 13% before cooling off by mid-afternoon. Still, after the beating units have taken the past two weeks, it must be nice to have some relief from the constant drop in value. 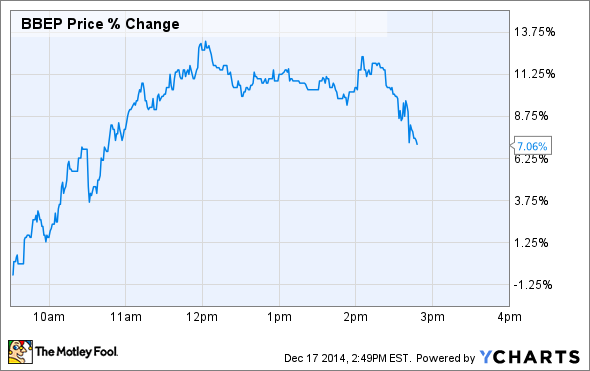 Today's energy surge was fueled by rising oil prices. After a nearly unabated sell-off over the past few months, oils prices were up about 2.5% in late afternoon trading. A smaller than expected decline in crude inventories helped spark the rally.

So what: Despite today's stock rally, it has still been an awful week for Breitburn Energy investors. Units are still down 16% over the past five days as investors worry about the company's ability to maintain its payout given high debt levels that are growing more threatening due to crashing oil prices.

Now what: Breitburn Energy's history shows it is capable of surviving tough times. However, that doesn't mean the worst is over: Oil prices could always resume their descent, which would take Breitburn Energy along for the ride. Investors can expect a lot of volatility until the oil markets settle down and there is more clarity surrounding Breitburn Energy's future direction.