The volatility in BreitBurn Energy Partners L.P. continues as it drops by double digits again today.

What: BreitBurn Energy Partners L.P. (BBEPQ) can't seem to catch a break lately. After plummeting more than 12% on Monday the company capped the week off with another near double digit loss. As we see below the stock is down over 9%, though it has bounced a tiny bit off its lows. 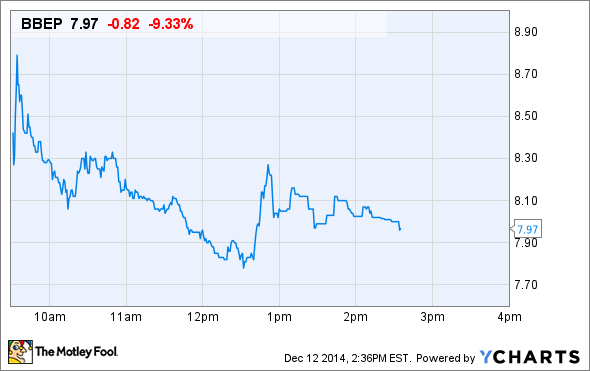 Today's sell off is partially due to another dip in oil prices, which are down another 3% today. However, the other catalyst in the downdraft today is that the company was cut from buy to hold by an analyst at Wunderlich Securities. As part of that rating cut, the price target was slashed from $20 to just $9 per unit.

So What: The analyst making that call is worried that the company's distribution is at risk of being cut due to weak oil prices. The analyst noted that, "although the company has strong hedges...it would still have a coverage well below 1.0x in this oil price environment." That's a concern because a coverage ratio less than one means that the company is paying out more than it earns. Further, the analyst pointed out that the company has, "$300 million of liquidity available, which could help cover the distribution shortfall; however, the company is already levered high with debt-to-EBITDA of 4.3 times vs the peer average of 3.5 times." It's this tight liquidity that's a concern as it limits the company's options going forward. At some point, if oil prices keep falling and remain low, the company will have no choice but to take action, which includes cutting the payout.

Now What: It's really no surprise to see a downgrade here. Oil prices continue to fall and BreitBurn Energy Partners is the largest oil-weighted E&P MLP in the sector. Analysts are being cautious because we simply don't yet know when oil prices will bottom. So, until that happens, there's not much a long-term investor can do but hold on for what is likely to be a very bumpy ride.

Breitburn Energy Partners LP Digs In for a Tough Year