Please ensure Javascript is enabled for purposes of website accessibility
Log In Help Join The Motley Fool
Free Article Join Over 1 Million Premium Members And Get More In-Depth Stock Guidance and Research
By Adam Galas - Oct 27, 2015 at 10:15AM

Find out just how likely BreitBurn Energy is to have to follow Linn Energy's lead and completely eliminate its distribution in the quarters ahead.

The primary reason most people invest in oil and gas MLPs such as Breitburn Energy Partners (NASDAQ: BBEP) is for the high yield. However, with Breitburn's yield now over 20%, it's clear that investors are worried that this MLP might have to cut its payout yet again or even follow the example of Linn Energy (NASDAQ: LINE) and suspend it entirely. That's an understandable concerns given that Breitburn has already slashed its distribution 74% since December 2014. 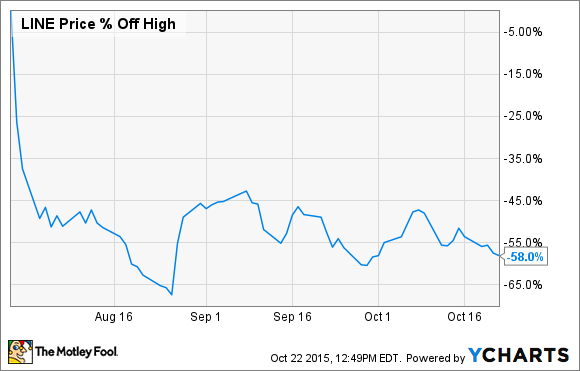 Given the catastrophic collapse Linn's unit price suffered upon announcing its payout suspension on July 30, many Breitburn investors, may find themselves in a potentially tough spot. Do you cut your losses ahead of a potential suspension of Breitburn's payout, and thus make paper losses permanent? Or do you continue to hold in the hope that Breitburn can manage to preserve its current payout long enough for oil prices to recover?

To help simplify this challenging question, let's examine some key factors that are most likely to force Breitburn to potentially eliminate its distribution.

Huge debt load sank Linn's payout
To determine whether Breitburn Energy will suffer a fate similar to Linn Energy, we need to first understand why Linn eliminated its payout.

The primary reason was an unmanageable debt burden of $10.3 billion. In fact, over the past 12 months, Linn Energy's interest expense consumed 41% of its operating cash flow. This is a dangerously unsustainable level given that no one knows how long oil prices might remain low.

What's more, Linn's $4 billion credit revolver was already 79% tapped and its borrowing base was coming up for reevaluation. This threatened to potentially leave Linn over its credit limit and force it to scramble for cash.On Oct. 21, Linn announced that its borrowing base had been cut to $3.6 billion, which probably means the MLP has some breathing room and time to pay down its debt before the next redetermination in April..

On the other hand, Breitburns's interest costs as a percentage of operating cash flow is 42%, nearly identical to that of Linn Energy's. Breitburn did manage to secure a $1 billion cash infusion on April 8 in a deal that pushed its next borrowing base reevaluation back to April, thus buying some time for crude to recover. However, Breitburn investors still need to be prepared for potentially bad news next year.

Borrowing base re-determination is key
At the end of June, Breitburn's credit revolver was 72% tapped. This means it might potentially be able to sustain a borrowing base reduction without further cuts to its payout. The key is for the reduction to be small enough so that Breitburn's existing debt balance remain sufficiently beneath the new borrowing limit that creditors don't potentially force it to further recapitalize at the expense of a payout cut or suspension, as happened last April.

Thanks to Breitburn's past two extremely painful distribution cuts, its current distributable cash flow is more than sufficient to sustain its payout, even with oil prices in the toilet. In fact, in the second quarter of 2015, it was able to generate a distribution coverage ratio -- the best metric to measure distribution sustainability -- of 2.16. Management is currently guiding for a second-half 2015 DCR of 1.92 to 2.47, assuming an average oil price of $50 per barrel..

The end of protective hedges
One final variable to consider is Breitburn's hedging portfolio, which currently allows the MLP to secure very attractive rates for its oil and gas.

Next year will bring not just less hedged volume, but lower prices as well. Thus, should oil fail to recover in 2016 or potentially fall even lower, Breitburn's DCF would take a pounding.

If it were just an issue of holding its coverage ratio above 1, then perhaps Breitburn could preserve its distribution into 2017 or 2018. That's even if oil remained at around $50 per barrel. However, as its hedges roll off, Breitburn's creditors might get nervous about its declining cash flow and start reducing its borrowing base. As DCF falls over time management will have less and less excess cash and might have to prioritize debt repayments over distributions to investors.

Bottom line
Breitburn's payout is probably safe for now, but 2016 is looking iffy and things could get worse from there. Investors in Breitburn need to understand that its sky-high-yield is highly speculative, and its payout remains at the mercy of the MLP's creditors and the global oil markets.